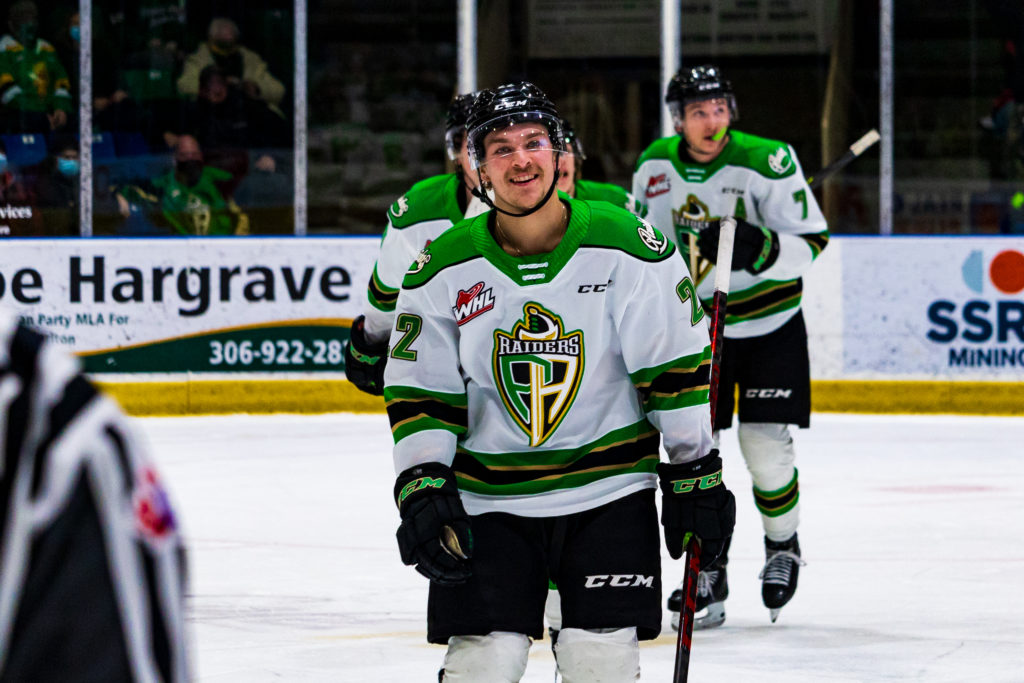 Herman’s last hat trick came in a 4-1 win over the Winnipeg ICE on December 14.

Keaton Sorensen scored a goal and added an assist in the win. Niall Crocker also found the back of the net for the Raiders.

The Oil Kings opened the scoring at the 8:15 mark of the first period. Dylan Guenther found a trailing Jaxsen Wiebe in the zone and Wiebe fired it past Tikhon Chaika to make it 1-0.

It was the only blemish of the opening period for Chaika. He turned aside two shorthanded breakaways – one from Jake Neighbours and one from Josh Williams – in the first 20 minutes. He also robbed Williams at the side of the goal just before the period expired.

With 4:59 left in the opening period, the Raiders got on the board. Tayem Gislason’s shot from the point was tipped on its way to the net by Dallyn Peekeekoot and sent over the net. Crocker was able to corral the puck at the side of the net and jam it in to the empty side of the goal for his third of the season.

Midway through the second, Guenther gave the Oil Kings the lead again. Shea Van Olm stopped up just after crossing the blueline and fed the Arizona Coyotes prospect. Guenther fanned on his shot but got enough to fool Chaika and put his side up 2-1.

Related Links
Game Highlights Gallery Post-Game Interviews
Just over two minutes later, the Raiders tied it on the power play. Ozzy Wiesblatt found Herman coming into the zone. Herman fired a one-timer from Wiesblatt’s pass that beat Sebastian Cossa’s glove for his 11th of the season.

Sorensen gave the Raiders the lead with 4:58 to play in the middle frame. He and Vitelli entered the zone on a two-on-one rush. Vitelli fought off a couple of slashes from Jalen Luypen and left a pass for Sorensen, who used his quick release to snap it over a downed Cossa for his sixth of the year.

Chaika preserved the one-goal lead into the second intermission by robbing Guenther. He tracked Wiebe’s pass across the zone to slide over and take away a goal from Guenther with the inside of his elbow.

The Raiders took a two-goal lead with 7:45 to play in the third. Vladislav Shilo was able to carry the puck into the zone and stay onside. He sprung Herman on a partial breakaway, who made a move to his backhand to roof it over Cossa to make it 4-2.

Herman completed his hat trick with his second power-play goal of the game with 5:32 to play. Eric Johnston found Herman in the slot and he snapped a shot that got through Cossa for his team-leading 13th goal of the season.

Chaika won his seventh game of the season, making 22 saves to secure the victory. Cossa stopped 20 shots for the Oil Kings in the loss.

The Raiders are off until Friday night when they open a home-and-home series with the Swift Current Broncos at the Innovation Credit Union i-Plex. Game time is 7 p.m. Catch the game on WHL Live, or head to The Rock & Iron Club House or Original Joe’s.

The two teams meet again at the Art Hauser Centre on Saturday night. Puck drop is 7 p.m. Tickets are available at the Raiders Office during working hours or any time at SaskTix.ca.