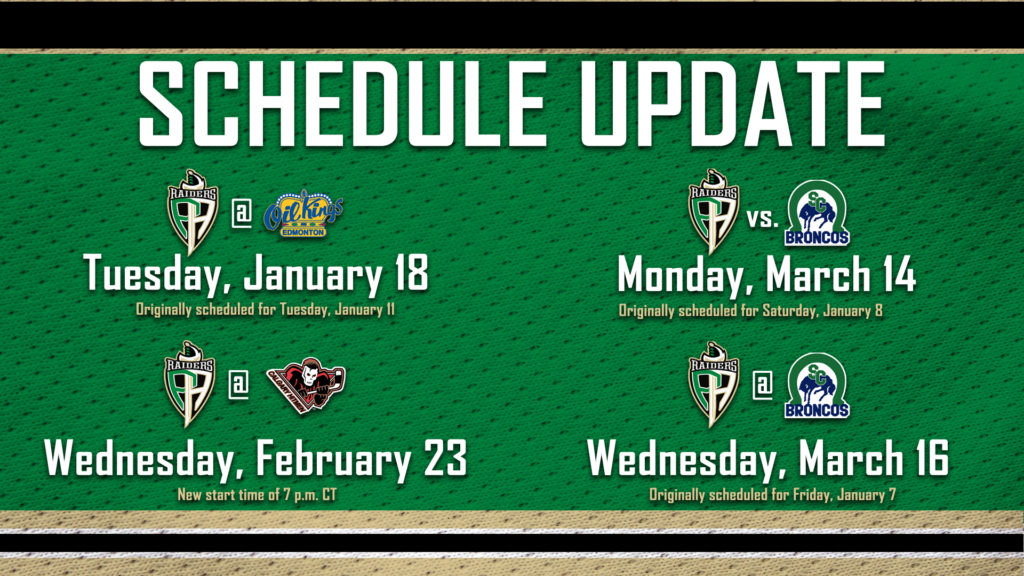 Tickets purchased for the home game against the Swift Current Broncos originally scheduled for Saturday, January 8 will be honoured for the game on Monday, March 14. If fans who purchased single-game tickets are unable to attend the game on its new date of Monday, March 14, the tickets can be exchanged for a voucher for another game. If Season Ticket Holders are unable to attend the new date, they are able to trade the ticket in for a voucher for another game prior to Friday, March 11 or used as part of the Never Waste A Ticket program for the five home games following Monday, March 14.

Additionally, the WHL announced a change to the start time of Wednesday, February 23’s game in Calgary against the Hitmen. The game has been moved to a 7 p.m. CT start.

The WHL also announced that the Calgary Hitmen, Kamloops Blazers, Prince George Cougars, Vancouver Giants, and Victoria Royals have all been cleared to resume team activities this week, in accordance with WHL COVID-19 Protocols. All 22 WHL Clubs are now eligible to compete in Regular Season play.

Eleven other WHL Regular Season games have been rescheduled:

The health and safety of all WHL participants is the top priority for the WHL. In order to reduce the risk of exposure to and transmission of COVID-19, the WHL requires all WHL roster players, hockey operations staff, and other team and League office personnel to be fully vaccinated against COVID-19 with a Health Canada approved vaccine.

About the Western Hockey League
Regarded as the world’s finest development league for junior hockey players, the Western Hockey League (WHL) head office is based in Calgary, Alberta. The WHL consists of 22 member Clubs with 17 located in Western Canada and five in the U.S. Pacific Northwest. A member of the Canadian Hockey League, the WHL has been a leading supplier of talent for the National Hockey League for over 50 years. The WHL is also the leading provider of hockey scholarships with over 375 graduates each year receiving WHL Scholarships to pursue a post-secondary education of their choice. Each season, WHL players also form the nucleus of Canada’s National Junior Hockey Team.