Raiders Doubled Up By Blades in Pre-Season Action 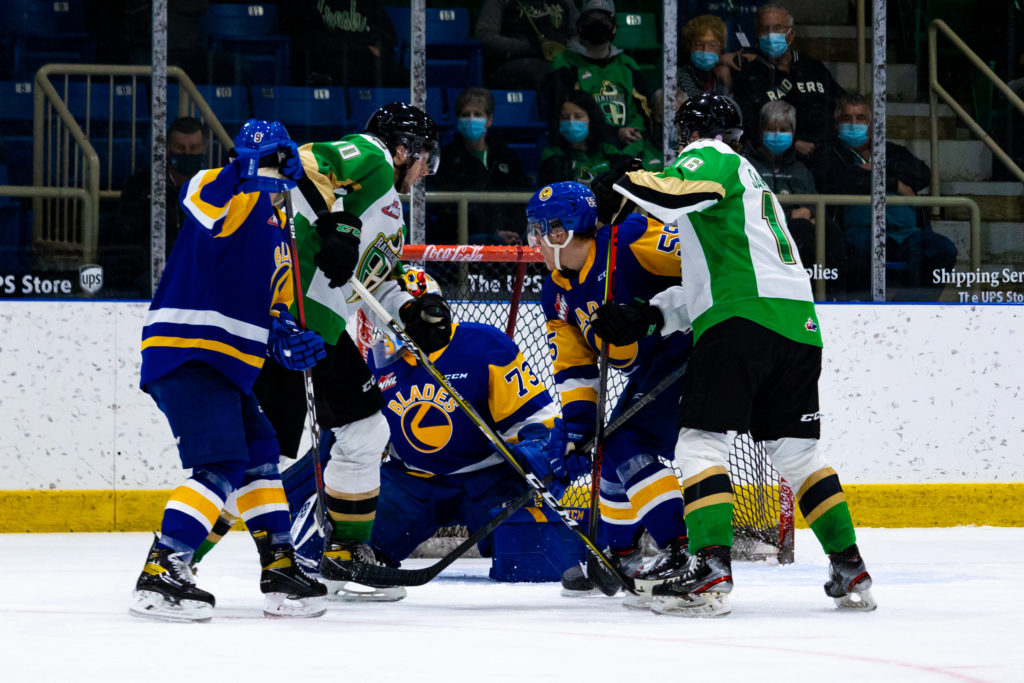 Prince Albert, SK – The Prince Albert Raiders (1-2-0-0) dropped a 4-2 contest against the Saskatoon Blades (2-1-0-0) on Friday night at the Art Hauser Centre in WHL Pre-Season action.

Eric Pearce and Keaton Sorensen tallied the Raiders’ goals in the loss. Kyle Crnkovic had a goal and two assists for the Blades, while Brendan Lee chipped in a goal and an assist.

It was newly acquired Ronin Geraghty stealing the show in the first period for the Raiders. The Burnaby, BC product stood tall between the pipes in the opening frame, stopping all 16 Saskatoon shots in the frame. His best came on Saskatoon’s second two-man advantage of the opening period. He reached back with his goal stick to rob Blades import Moritz Elias of a sure goal to keep the visitors off the scoreboard.

Related Links
Game Highlights Gallery
The Raiders were able to take the lead late in the first with a power-play goal of their own. Evan Herman found Pearce with a cross-ice pass and the Regina product wired a shot that beat Maier with 2:26 left in the frame for his second of the Pre-Season.

Just 42 seconds later, Sorensen was able to double the Raiders’ advantage. Michael Horon worked behind the net for a wraparound attempt that was turned aside by Maier. Sorensen was in the slot and buried the rebound to give the Raiders a 2-0 lead after 20 minutes.

The Blades cut into the lead 1:02 into the second period. Pavel Bocharov’s shot from the point hit a body in front of the net and the puck got past Geraghty to make it a 2-1 game.

Before the end of the second, Saskatoon tied it up. Lee’s shot off the rush beat Geraghty, but found the post. The puck stayed in the crease and bounced of Geraghty’s right skate and out the left side. Brandon Lisowsky followed up the play and potted the loose puck to tie things up heading into the third.

Lee gave the Blades a 3-2 lead 3:39 into the third. He collected a pass in the slot and made a move around a Raider defender to set himself up with a partial breakaway. He made a move to his backhand and lifted his shot over a sprawling Geraghty for his second point of the night.

After some furious pressure from the Raiders with the extra attacker, Jayden Wiens forced a turnover and set up Crnkovic on a breakaway to hit the empty net and wrap up the scoring at 4-2.

Geraghty stopped 29 shots in his Raiders debut. Maier made 18 saves to pick up the win for the Blades.

Up next for the Raiders is their WHL Pre-Season finale against the Saskatoon Blades in Warman at The Legends Centre. Game time is 7 p.m.

The next Raiders’ home game is the 2021-22 Home Opener Presented By 900 CKBI and Great Western Brewing as the Regina Pats come to town. Game time is 7 p.m. Tickets are available at SaskTix.ca.