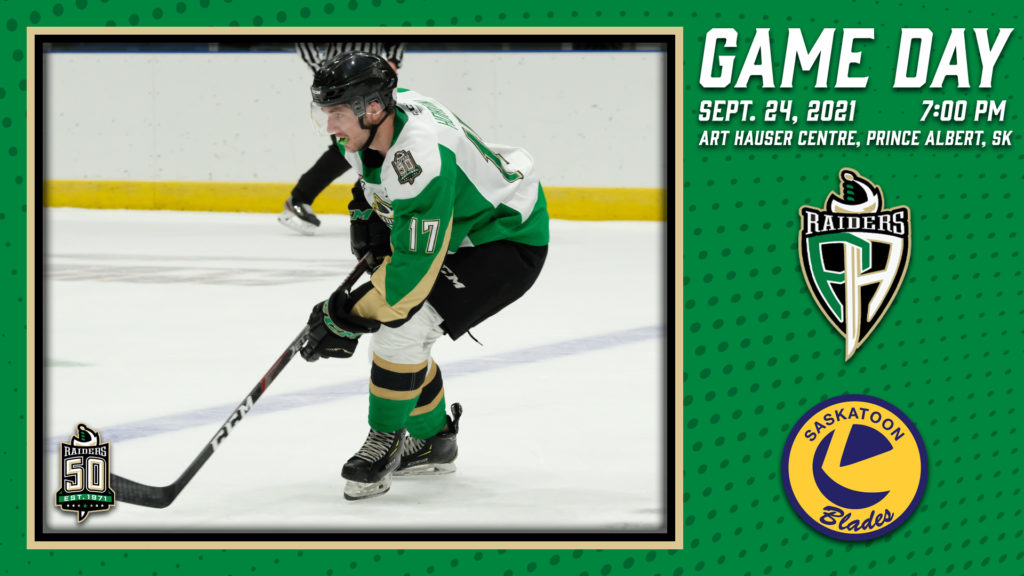 It’s Aliaksei Protas Bobblehead Night Presented By The Car Guys at Mann-Northway Chevrolet Buick GMC at the Art Hauser Centre as the Raiders play their final home WHL Pre-season contest against the Saskatoon Blades. Here’s what you need to know for tonight’s game.

Single-game Pre-Season Tickets: $15 general, $10 for children 12 and under, taxes and fees included.

The Government of Saskatchewan has implemented a province-wide mandatory masking order for all indoor public spaces, which includes the Art Hauser Centre. Please properly wear your mask during tonight’s game, except while consuming a beverage or food.

To Season Ticket Holders, season ticket cards for the 2021-22 WHL season are available for pick up at the box office when it opens at 5 p.m.

The Aliaksei Protas Bobblehead Presented By The Car Guys at Mann-Northway Chevrolet Buick GMC is first available at tonight’s WHL Pre-Season contest against the Blades. Pick yours up in the Johnny Bower Lobby for just $10. If you missed the Kaiden Guhle and Leon Draisaitl bobbleheads from earlier in The Car Guys series, they will be avaiable for purchase in the Source For Sports Team Store in the Art Hauser Centre.

The Raiders finished last weekend with a split of the home-and-home series against the Regina Pats, falling 6-2 at the Brandt Centre on Saturday night. Evan Herman and Michael Horon found the back of the net in the loss. Herman (three goals) and Horon (two goals, one assist) are tied with Tyson Laventure (three assists) for the Raiders’ Pre-Season scoring lead with three points each.

Earlier this week, the Raiders acquired 2004-born goaltender Ronin Geraghty from the Tri-City Americans in exchange for prospect Ivan Kedrov. Geraghty, a Burnaby, BC product, had a 3.37 goals-against average with a 0.907 save percentage in two Pre-Season apperances with the Americans this season. For more details, click here.

The Raiders close out their Pre-Season schedule on Saturday night against the Saskatoon Blades in Warman at The Legends Centre. Game time is 7 p.m. For further ticketing information, contact fundraising@warmanwildcats.com.