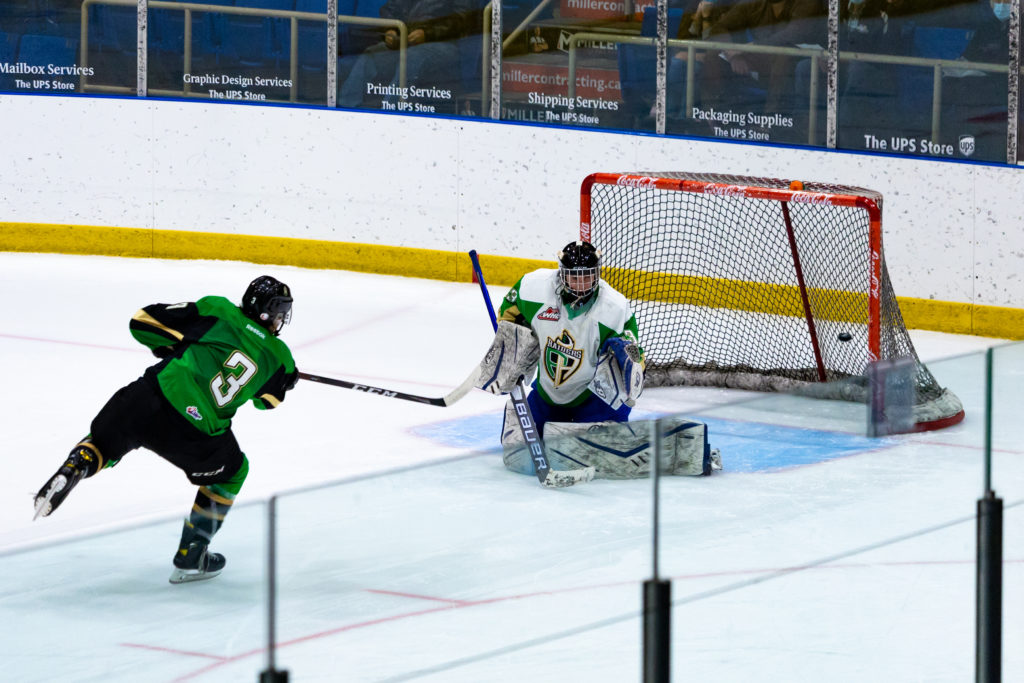 Prince Albert, Sask. – Adam McNutt scored the decisive goal in the 10th round of the shootout as Team Green defeated Team White 4-3 in the annual Green And White Intra-squad Game in front of a lively crowd at the Art Hauser Centre on Saturday afternoon.

Green got the scoring started 3:13 into the contest when 2020 WHL Prospects Draft pick Nathan Gossoo beat White goaltender Spencer Borsos. Eric Pearce scored six minutes later to give Green a 2-0 lead at the mid-point of the first.

White responded with 4:22 to play in the opening period. Zachary Wilson, a 2020 WHL Prospects Draft pick, found the back of the net past Green’s Carter Serhyenko to make it a 2-1 game for Green heading into the intermission.

After both teams were held off the board in the second period, Michael Horon and put a backhand shot past Green goaltender Max Hildebrand to bring White back level at 2-2 just 58 seconds into the third period.

Midway through the third, White took its first lead of the game with a power-play marker. Kaiden Guhle fired a shot from the point that beat Hildebrand to make it 3-2.

Green found the equalizer late in the third period. Tyson Laventure potted a loose puck from a scramble in front White goaltender Matthew Malin to tie the game at 3-3 with 1:04 to play, sending the game into overtime.

An eventful overtime period didn’t solve anything. After Cale Sanders scored in the second round of the shootout for Green, 2020 WHL Prospect Draft pick Harrison Lodewyk kept White alive with a goal in the third round. No other goals were scored until McNutt ended the game when he beat Malin in the 10th round.

Related Links
Gallery 2021 Green And White Game Livestream
Hildebrand got the win in goal for Green, stopping 14 of 16 shots. Serhyenko stopped 14 of 15 attempts in his portion of the game for Green. At the other end, Malin made 14 saves in his half of the game for White; Spencer Borsos stopped 12 shots for White in his 30 minutes of action.

The Raiders open their WHL Pre-season schedule on Friday night when the Regina Pats visit the Art Hauser Centre. Puck drop is 7 p.m.