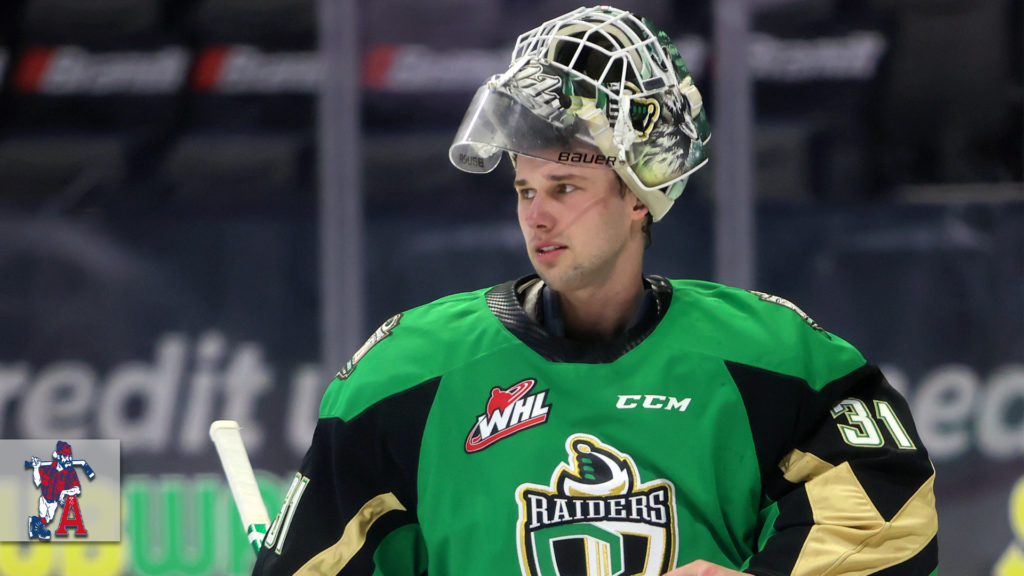 Paddock wrapped up his WHL career in the Subway Hub Centre, posting a 7-6-1-0 record with a 2.87 goals-against average and a 0.903 save percentage in 15 appearances. He also had two shutouts. His performance in the Hub earned Paddock the First Star of the Three Stars Award and the Orland Kurtenbach Award as Most Valuable Player in the Raiders’ Year-End Awards.

The Brandon, MB product was acquired by the Raiders from the Regina Pats at the 2020 WHL Trade Deadline. He made 34 appearances for the Raiders with a 20-9-2-2 record and five shutouts. In his WHL career, Paddock had a 64-58-7-7 record with a 3.01 goals-against average and a 0.905 save percentage with nine shutouts.

Related Links
Acadia Release: Max Paddock commits to Axemen
“For me, the decision was pretty easy when Burnsy [Acadia Head Coach Darren Burns] reached out to me,” said Paddock in a release on the Axemen’s website. “First off, my cousin Travis young played for the Axemen a while back and he had nothing but good things to say about the program. Also knowing that Jordy Stallard, another Brandon, Manitoba native, will help make the transition out east a lot smoother.”

Paddock will join Raiders alumni Stallard and Loch Morrison in Acadia as both players were on the Axemen’s roster for the 2020-21 season.

In the Axemen’s last full season, the club posted a 19-9-0-2 record to finish second in AUS. Acadia earned a berth in the 2019-20 U SPORTS Men’s Hockey Championships before the tournament was cancelled due to COVID-19.

📢🅰️ The Acadia Axemen are proud to announce the commitment of goaltender Max Paddock to the program. Welcome to the Axemen family @paddockmax31 🏒🥅 Learn more about Max and why he chose Acadia, and hear from Coach Burns here:https://t.co/mNb3vMq9PK pic.twitter.com/d5B67W9Aqe