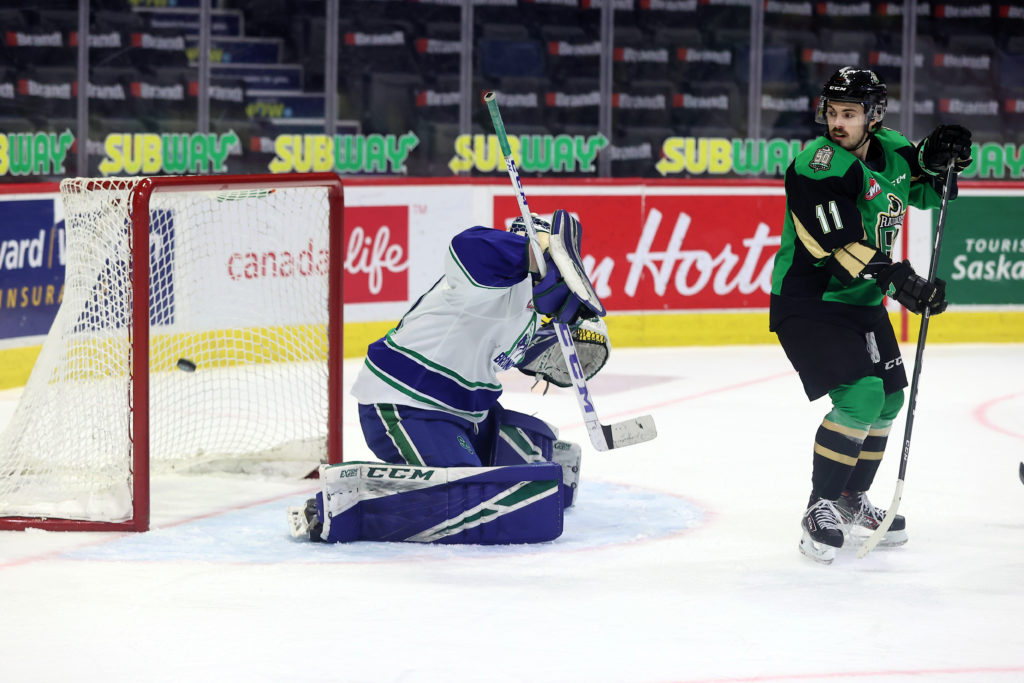 Regina, SK – Ozzy Wiesblatt scored 54 seconds into overtime to lift the Prince Albert Raiders (9-11-3-1) to a 6-5 win over the Swift Current Broncos (6-16-2-0) on Wednesday night in the final game of the Subway Hub Centre at the Brandt Centre.

Wiesblatt also had an assist in the contest for his eighth multi-point game of the season. Reece Vitelli led the Raiders with two goals and an assist. Remy Aquilon and Eric Pearce also chipped in a pair of assists. Tyson Laventure and Terrell Goldsmith had two of the other Raiders’ goals.

Justin Nachbaur and Spencer Moe each had a point in their final WHL game with a goal and an assist, respectively.

Related Links
Game Highlights Gallery Post-Game Interviews
The Broncos got on the board first 6:42 into the contest. On a rush into the Raiders’ zone, Josh Davies put a shot on goal that went over the net. The shot it the glass behind the net and bounced to the side of the goal where Raphael Pelletier was able to bang in the rebound.

Vitelli tied things up on a power play with 6:39 to play in the opening period. Wiesblatt won a puck battle along the boards to the Winnipeg, MB product. Vitelli skated into the slot and snapped a shot that hit the crossbar over Reid Dyck and went in for his sixth of the season.

Shortly after, the Raiders found themselves on a two-man advantage. The best chance came when Pearce was the recipient of a cross-zone pass, but he didn’t get all of the shot and sent it wide.

Late in the frame, Goldsmith gave the Raiders the lead. Vitelli won a faceoff in the left circle back to the defenceman from Fort St. James, BC. Goldsmith got his shot on goal through traffic and it squeaked through Dyck for his second goal of the season, giving the Raiders a 2-1 advantage with 1:14 to play in first.

Terrell Goldsmith gets his second goal of the #SubwayWHLHub!#GoRaidersGo pic.twitter.com/OHXA3llt2F

Max Paddock, making the start in his last WHL contest, made a highlight-reel save just as time expired in the first period. The goaltender made a blocker save on Mathew Ward, but the rebound found the stick of Michael Farren. The Broncos overager quickly fired on goal, but Paddock slid over and robbed the forward with a glove save.

At the 6:48 mark of the second, the Broncos tied things up. Karson King lifted a puck out of his zone that Bode Hagan was able to skate under, setting up a partial breakaway. Hagan snapped a shot that beat Paddock to tie things up at 2-2.

The Raiders made the most of their fifth power play of the game near the end of the middle frame. Aquilon’s shot from point was blocked by a Bronco penalty killer, but it went directly to Laventure. The Lloydminster, AB product was able to dig it out of his feet and snap it past a diving Dyck for his fifth of the year to put the Raiders up 3-2 after 40 minutes.

Just 16 seconds into the third, the Raiders extended their lead. Pearce and Michael Horon worked a bouncing puck to the front of the Broncos’ goal. Nachbaur found the puck and knocked it out of the air and past Dyck for his ninth of the season.

The Broncos cut into the lead shortly after with a power-play goal of their own. Farren found Carter Stebbings cutting towards the goal and the Broncos forward made a move to his backhand to beat Paddock and make it 4-3 at the 1:39 mark of the third.

About six minutes later, Vitelli restored the Raiders’ two-goal advantage. He circled back around the faceoff circle at centre ice then sped through the Broncos defence to create a partial breakaway. Vitelli made a move to his backhand and slipped the puck under a sliding Dyck to give the Raiders a 5-3 advantage.

Less than a minute later, Josh Davies sped into the zone and gave Paddock a snow shower after the whistle. Paddock took exception to the play and tackled the Broncos forward in the zone. For the ensuing physicality in the crease, Paddock was given a match penalty and a game misconduct, ending his evening.

On the ensuing major power play, the Broncos cut the lead to one. Farren put a shot on goal that was stopped by Carter Serhyenko. Cole Nagy dug it out and it found Ward on the backdoor who put it past a diving Serhyenko to bring the Broncos back within one with 9:07 to play in the third.

The Broncos tied the game with 1:03 left in regulation. Before the puck could leave the Raiders’ end, Farren dumped it towards goal. Serhyenko made the kick save, but Nagy grabbed the rebound and found the back of the net to tie things up at 5-5 and send the game to overtime.

In the overtime period, Aquilon poke-checked the puck out to Pearce who got it to Wiesblatt. The San Jose Sharks prospect gained speed, turned the corner on Ward, and beat Dyck with a backhanded as he was being hooked to end the game with his seventh of the season 54 seconds into the extra frame.

In his final WHL game, Paddock stopped 21 shots before being ejected from the game. Serhyenko made six saves in relief to pick up the win. Dyck stopped 32 shots in the loss for the Broncos.

The Raiders finished the 2020-21 season in fourth place in the East Division with 22 points.