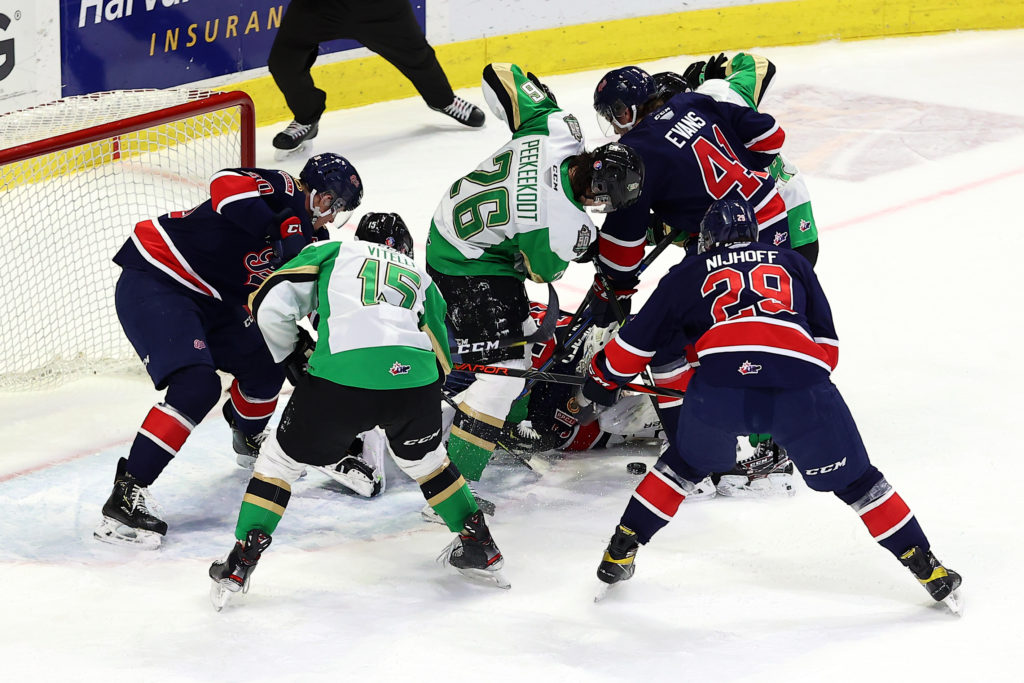 The loss snapped the Raiders’ three-game winning streak and four-game point streak. It was the final game of the season series between the two teams as the Raiders and the Pats each picked up two wins in the four-game series.

Tyson Laventure had another big night for the Raiders against the Pats, scoring a pair of goals. Tre Fouquette chipped in the first two points of his WHL career with a goal and an assist.

The Pats got the game’s first goal 4:13 into the contest. Carter Massier’s spinning shot from the point went off a Pat and a Raider in front of the goal, and bounced to the side of the goal. Cole Dubinsky was in the right place at the right time to bang in the loose puck to give the Pats the 1-0 advantage.

With 8:48 remaining in the period, the Raiders lost Justin Nachbaur hit for the rest of the game. He lined up Braxton Whitehead for a big hit after the Pats player came out from behind the goal. Nachbaur was given a checking to the head major and a game misconduct. The Raiders were able to kill off the penalty.

The Pats struck again 6:54 into the second period after another fortunate bounce. Kyle Walker’s shot was stopped by Max Paddock’s blocker. The rebound hit Carter Chorney in the chest as the Pats forward drove to the net and bounced passed the goal line to give Regina a 2-0 lead.

At the 9:03 mark, the Raiders got on the board with a power-play goal. Graydon Gotaas got the puck off an offensive zone faceoff and sent the puck over the Fouquette who fired a shot on goal. Kieper made the save, but Laventure was on the top of the crease. His first attempt was stopped, but he pulled the puck to his backhand to beat Kieper for this third of the season to make it a one-goal game.

.@tysonlaventure gets us on the board with a power-play marker!

Congrats to Tre Fouquette on picking up his first WHL point with an assist on the goal!#GoRaidersGo #SubwayWHLHub pic.twitter.com/9XaoVfO0oN

Just 44 seconds later, the Pats restored their two-goal advantage. Sloan Stanick set up Dubinsky with a backdoor feed and the Ardrossan, AB product redirected it past a sprawling Paddock for his second of the contest to make it 3-1 for the Pats.

Laventure brought the Raiders within one again with 5:32 to play in the period. Layton Feist stumbled as he tried to make a pass, losing the puck at the side of the goal. Laventure picked it up and was able to stuff it past Kieper’s right pad for his second of the night.

.@tysonlaventure pounces on the turnover and buries his second of the night to bring us back within one!#GoRaidersGo #SubwayWHLHub pic.twitter.com/nkH220GRC6

The Raiders tied things up 1:32 later. Ozzy Wiesblatt faked a drop pass as he walked the line in the offensive zone. He eventually dropped it for Fouquette who had time to step into a shot and wire it through a screen and past Kieper for his first WHL goal to even things up at 3-3.

Tre Fouquette ties it up with his first WHL goal!

The Pats regained their lead with a power-play goal with 2:01 left in the frame. Carson Denomie hit Drew Englot with a cross-zone pass. Englot snapped a shot that beat Paddock to give the Pats a 4-3 advantage after two periods.

While the Raiders pressed for the equalizer, one of their best chances came in the final five minutes. Eric Pearce was able to send across a pass to Michael Horon. As Horon made a move across the goal, Kieper got enough of his stick on the puck to get it away from Horon, who nearly had a wide open net.

With 1:51 to go, the Raiders drew a power play still looking to tie. A Wiesblatt one-timer created traffic in front, but no Raider in front was able to get a stick on it as time expired.

Paddock stopped 28 shots in the loss for the Raiders. Kieper made 28 saves to pick up the win for the Pats.

The Raiders are back in action on Monday night when they close out the season series with the Moose Jaw Warriors. Puck drop is 8 p.m. WHL Live on CHL TV.