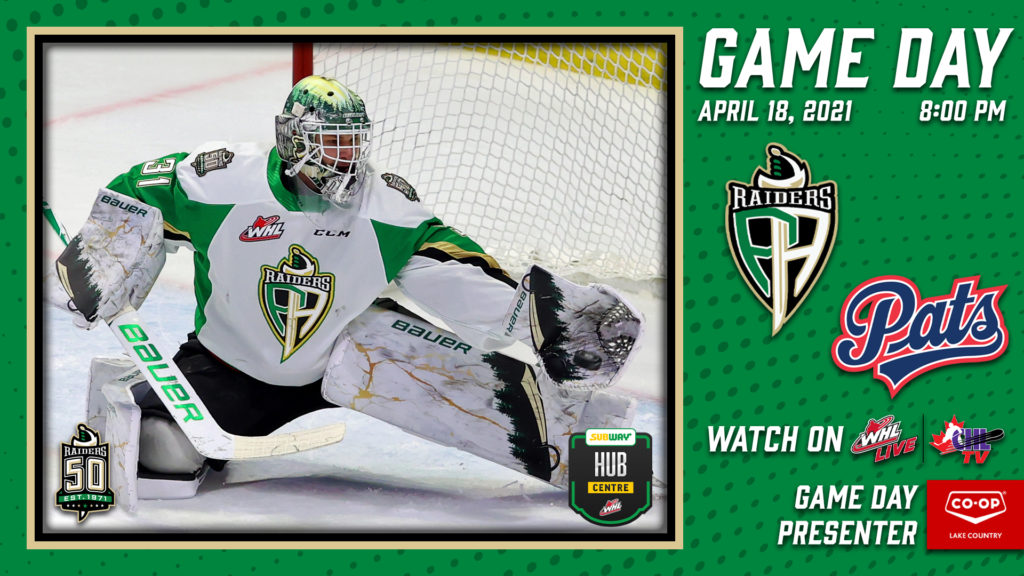 RAIDER REVIEW: The Raiders (7-8-2-1) face off against the Regina Pats (6-9-2-1) for the final time in the Subway Hub Centre tonight. In the Raiders’ last game, Max Paddock posted a 45-save shutout to backstop his team to a 2-0 win over the Moose Jaw Warriors on Thursday night. Michael Horon and Eric Pearce scored as the Raiders extended their winning streak to three games.

SHUTTING THE DOOR: Max Paddock’s 45-save shutout on Thursday tied a career high for saves made in a win. He tied the mark set on Nov. 30, 2019 against the Red Deer Rebels when he was with the Pats. Paddock has eight shutouts in his WHL career, four of which have come since being acquired by the Raiders at the 2020 WHL Trade Deadline.

CAREER SEASON: Eric Pearce matched a career high in goals (seven) and points (11) with his goal in Thursday night’s win over the Moose Jaw Warriors. Pearce set those career bests in 63 games during the 2018-19 season. In his four-year career with the Raiders, Pearce has 21 goals and 15 assists in 189 career games.

STARTING STRONG: Michael Horon’s goal on Thursday night got the scoring started for the Raiders with his fourth goal of the Subway Hub Centre. It was the second time this season Horon has scored the first goal in a game, tying Dallyn Peekeekoot for the team lead. The Raiders have a 5-2-2-1 record this season when they get the game’s first goal.

POINTS VERSUS THE PATS: Tyson Laventure is tied for the team lead in scoring in this year’s season series against the Regina Pats. The Lloydminster, AB product has all five of his points—two goals and three assists—in the previous three games against Regina.

MAKING HIS DEBUT: 2004-born defenceman Tre Fouquette made his WHL debut in Thursday’s win over the Moose Jaw Warriors.

NEXT UP: The Raiders are back in action on Monday in the finale of their season series with the Moose Jaw Warriors. Game time is 8 p.m. Catch the game on WHL Live on CHL TV.