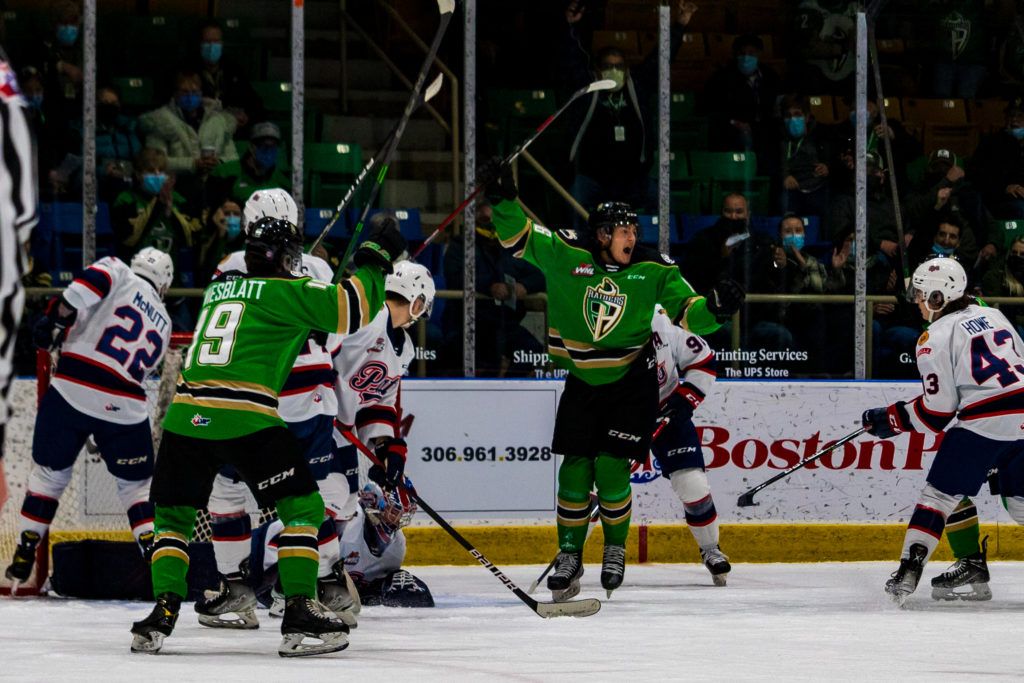 It was the multi-point game for the Claresholm, Alta. product and it came against his former team. Keaton Sorensen added a goal and two assists, while Remy Aquilon and Ozzy Wiesblatt each chipped in two helpers. Sloan Stanick and Evan Herman also scored for the Raiders.

The win extended the Raiders’ current streak to three games.

Big thank you to everyone who bought tickets for the TJ’s Pizza 50/50!

Stanick opened the scoring against his former club 7:53 into the opening period. He took a drop pass from Wiesblatt at the halfboards, put the puck through Alex Geci, cut around Braxton Whitehead, then fired against the grain to beat Matthew Kieper through a screen provided by Carson Latimer for his seventh goal of the season.

Sanders doubled the Raiders’ lead with 4:52 to play in the opening period. After getting a pass from newly-acquired Eric Johnston, he skated from the left wall to the slot. His shot beat Kieper over the blocker for his third goal of the year.

With just 3.8 seconds to play in the opening frame, Sanders tacked on his second of the game. Kieper stopped the Sorensen wraparound attempt, but Sanders fought off a check in front from Layton Fesit to get a couple whacks at the puck before burying his fourth of the season to give the Raiders a 3-0 lead after 20 minutes.

The Pats cut into the lead with 6:36 to play in the middle frame on the power play. Connor Bedard sent a pass over to Tanner Howe who blasted a one-timer past Tikhon Chaika to make it a 3-1 game.

Related Links
Game Highlights Gallery Post-Game Interviews
Just 80 seconds later, the Raiders restored their three-goal advantage. Latimer tried to centre a pass for a cutting Herman, but it got deflected. Herman stayed with it and banked a backhanded shot off Cole Carrier and in for the Raiders forward’s sixth goal of the season.

Less than a minute later, Sorensen made it a four-goal game. He circled the zone and put a shot on goal from the left point. The shot got through a Niall Crocker screen in front and past Kieper for Sorensen’s fourth goal of the season, giving the Raiders a 5-1 advantage.

A miscue brought the Pats back within three goals with 22 seconds left in the period on a Raiders’ power play. Chaika made a short pass to Nolan Allan in front of the goal. The puck got caught in Allan’s skates and ended up behind Chaika to make it 5-2 after 40 minutes. Braxton Whitehead got credit for the goal.

Chaika shook off the miscue in the third, stopping all 15 shots faced in the final frame to preserve the win for the Raiders. In picking up his third consecutive win, the import netminder stopped 45 attempts on goal.

Kieper made 20 saves in goal for the Pats over the first two periods. Drew Sim stopped five shots in relief as he played the third period for Regina.

Puck drop for Tuesday’s game against the Broncos is 7 p.m. Tickets are available at the Raiders Office and at SaskTix.ca.