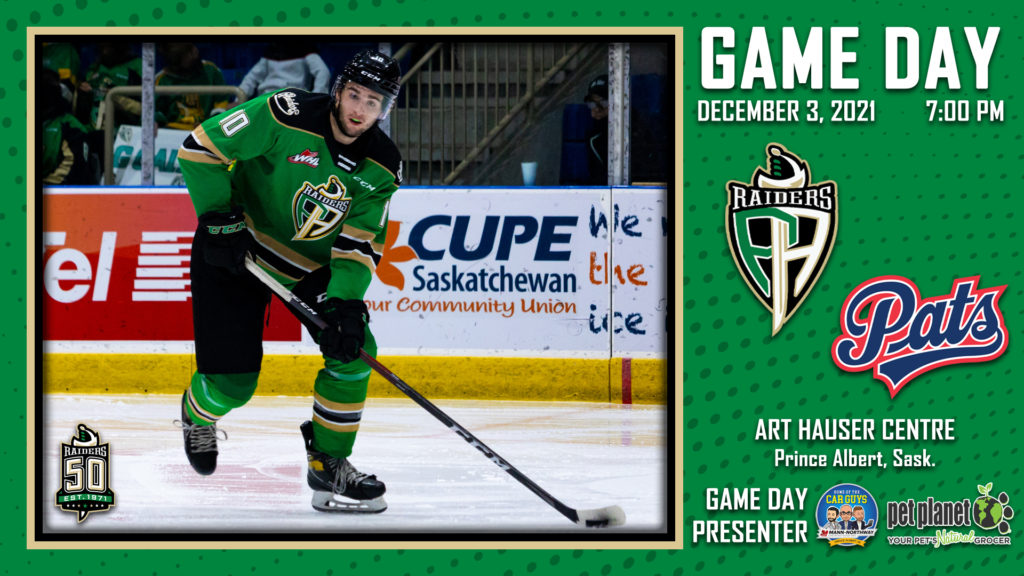 RAIDER REVIEW: The Raiders (8-12-0-1) host the Regina Pats (9-12-0-0) at  the Art Hauser Centre tonight. In their last action, the Raiders came back from a three-goal deficit to beat the Winnipeg ICE 4-3 in overtime. Sloan Stanick converted the winner in the extra frame. Evan Herman, Landon Kosior, and Reece Vitelli all scored in regulation. Tikhon Chaika stopped 33 shots for his second consecutive win.

PACK THE PICK-UP: Tonight is Pack The Pick-Up Night Presented By The Car Guys at Mann-Northway and Pet Planet Prince Albert in support of the Prince Albert SPCA. Fans are asked to bring in donations of pet food to pack the pick up trick. If you bring in a donation, you will be entered to win a VIP Package courtesy of Mann-Northway!

NOVEMBER WRAP: The Raiders posted a 5-5 record over the month of November, finishing the month back-to-back wins in Manitoba. Tyson Laventure and Sloan Stanick tied for the team lead in points over the month as both posted four goals and four assists.

OVERTIME HERO: Sloan Stanick scored his first WHL overtime winner on Sunday evening against the Winnipeg ICE. It was also his second game-winning goal of the season. Since joining the Raiders in October, the Rapid City, Man. product has four goals and four assists in 14 contests.

Related Links
Game Program Get Tickets
HELPING HAND: Ozzy Wiesblatt recorded a pair of assists on Sunday against the ICE, giving the San Jose Sharks prospect his third multi-point game of the season.

CAPITAL CITY CHALLENGE: Harrison Lodewyk and Canada Red finished with a silver medal at the Capital City Challenge following a 5-4 loss in overtime to Canada Black. Lodewyk posted a goal in five games at the tournament.

UP NEXT: The Raiders host the Swift Current Broncos on Santa Anonymous Night Presented By Axis Vac and the Optimist Club of Prince Albert. Game time is 7 p.m. Tickets are available at the Raiders Office and any time at SaskTix.ca.