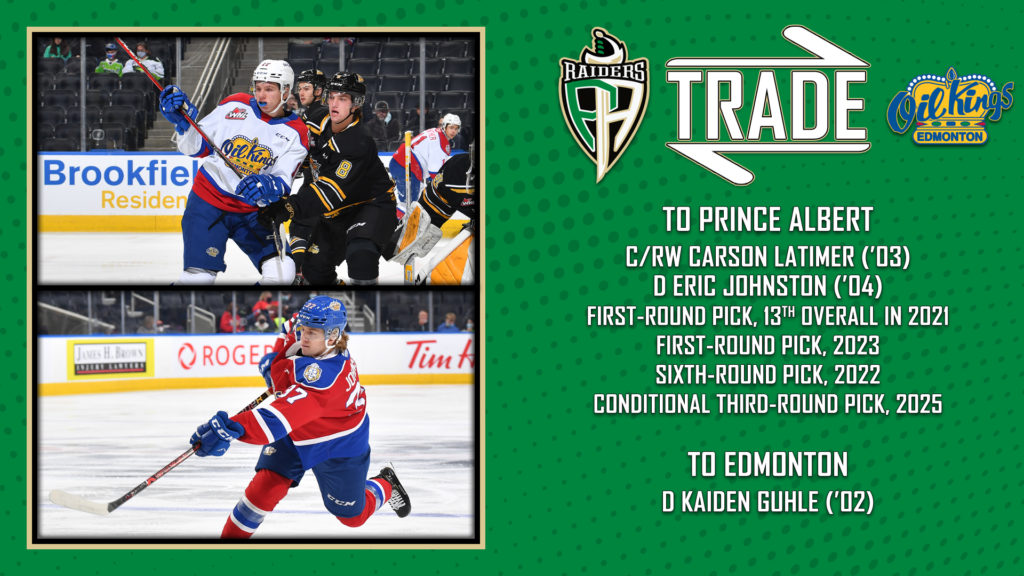 “Today is full of mixed emotions. I want to thank Kaiden for his commitment to the organization and Prince Albert as a community. This ends an era of the Guhle family and their direct participation with the club, though they will always be Raiders,” said Raiders General Manager Curtis Hunt.

“The toughest thing is to differentiate what was Kaiden’s biggest contribution. Was it the person, the leader, the intangibles, the player, or the pride he had in being a Raider? We certainly wish him nothing but the best as he goes for gold with Team Canada and in the next phase of his career with the Edmonton Oil Kings and on to Montreal.”

Latimer was selected in the fourth round of the 2021 NHL Draft by the Ottawa Senators. The Surrey, B.C. product has six goals and eight points in 18 games this season with the Oil Kings. Over his 46-game WHL career, the third-round WHL Prospects Draft pick has 12 goals and 25 assists with 12 penalty minutes.

Johnston, a Regina product, is in his first season in the WHL. He has four assists and 11 penalty minutes in 19 games with the Oil Kings this season. Johnston was selected in the sixth round of the 2019 WHL Prospects Draft.

“As we bid farewell, we are very excited about the acquisitions today,” Hunt said. “Carson would’ve already met one of our most infamous Raiders in Parker Kelly and had a glimpse of what it takes to be a Raider. We look forward to seeing his speed and play.

“In addition, Eric’s a young defenceman that has graduated out of the Regina Pat Canadians program, so we know he’s been very well coached. What we do know about these players as people is that they both come with high character and are great teammates. They should fit seamlessly into our Raider family.”

Guhle was selected first overall in the 2017 WHL Prospects Draft by the Raiders. This season, the Sherwood Park, Alta. product has posted two goals and 13 assists in 17 games since returning from Montreal Canadiens camp.

In his WHL career, Guhle has 17 goals and 58 assists in 156 regular season contests. He also contributed in three assists during the 2019 WHL Playoffs as the Raiders lifted the Ed Chynoweth Cup as 2019 WHL Champions.

Guhle was chosen 16th overall by the Montreal Canadiens in the 2020 NHL Draft and signed his entry-level contract two weeks later. He made his professional debut last season prior to the start of the Subway Hub Centre, dressing in three games for the AHL’s Laval Rocket.

The Raiders are off until Friday night when they Regina Pats visit the Art Hauser Centre on Pack The Pick-Up Night presented by The Car Guys at Mann-Northway Chevrolet GMC Buick and Pet Planet. Fans are asked to bring pet food donations to the game to support the Prince Albert SPCA. Game time is 7 p.m. Tickets are available at the Raiders Office during open hours and at SaskTix.ca.