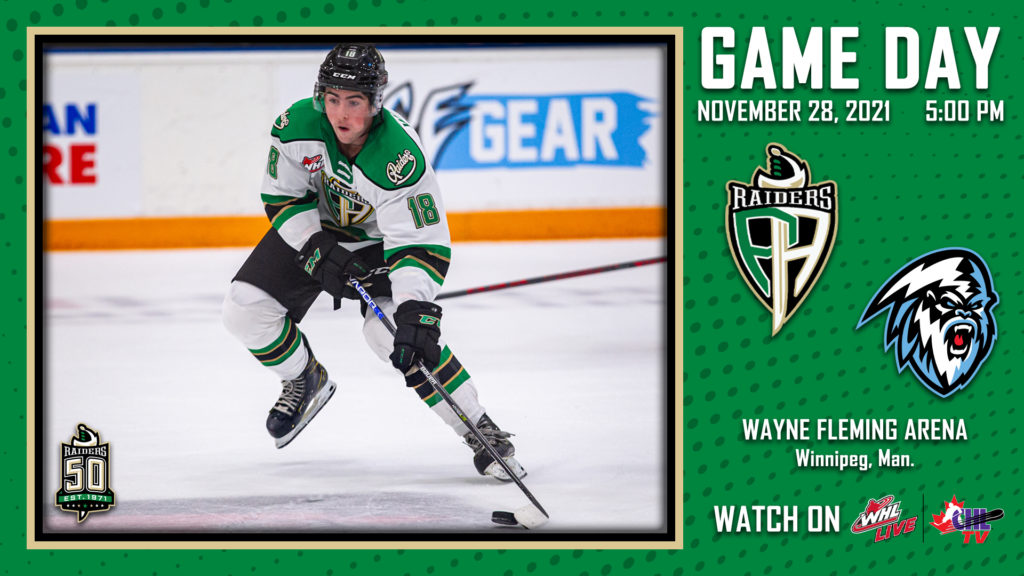 RAIDER REVIEW: The Raiders (7-12-0-1) are in Winnipeg this evening to take on the ICE (21-1-0-0) at Wayne Fleming Arena. Last night in Brandon against the Wheat Kings, the Raiders picked up a 2-1 win at Westoba Place. Kaiden Guhle led the charge with both of the Raiders’ goals in the win. Tikhon Chaika stopped 23 shots for the Raiders to earn the win between the pipes.

IT TAKES TWO: Kaiden Guhle scored his first two goals of the season on Saturday against the Wheat Kings, snapping a 15-game goalless streak dating back to the Hub Centre in March. It was the first multi-goal game of Guhle’s career and fourth multi-point effort of the season. The Montreal Canadiens prospect took over sole possession for the team lead in points with 14.

FIRST: Goaltender Tikhon Chaika earned the first win of his WHL career in his third career start on Saturday night in Brandon with a 23-save effort. The netminder from Minsk, Belarus has a 1-1-0-1 record in six appearances for the Raiders, posting a 2.36 goal-against average and a 0.905 save percentage.

STREAKING: Nolan Allan extended his point streak to a career-best four games with an assist on Saturday against the Wheat Kings. The Davidson, Sask. product has reached double-digit points for the first time in his WHL career.

CAPITAL CITY CHALLENGE: Harrison Lodewyk and Canada Red split the first two games of the Capital City Challenge in Ottawa. After losing their tournament opener on Friday, Canada Red picked up the win over the Canadian Women’s National Team on Saturday. Lodewyk recorded a goal for Canada Red in the win.

UP NEXT: The Raiders return to the Art Hauser Centre on Friday night to take on the Regina Pats. Game time is 7 p.m. Tickets are available at the Raiders Office during working hours and any time at SaskTix.ca.