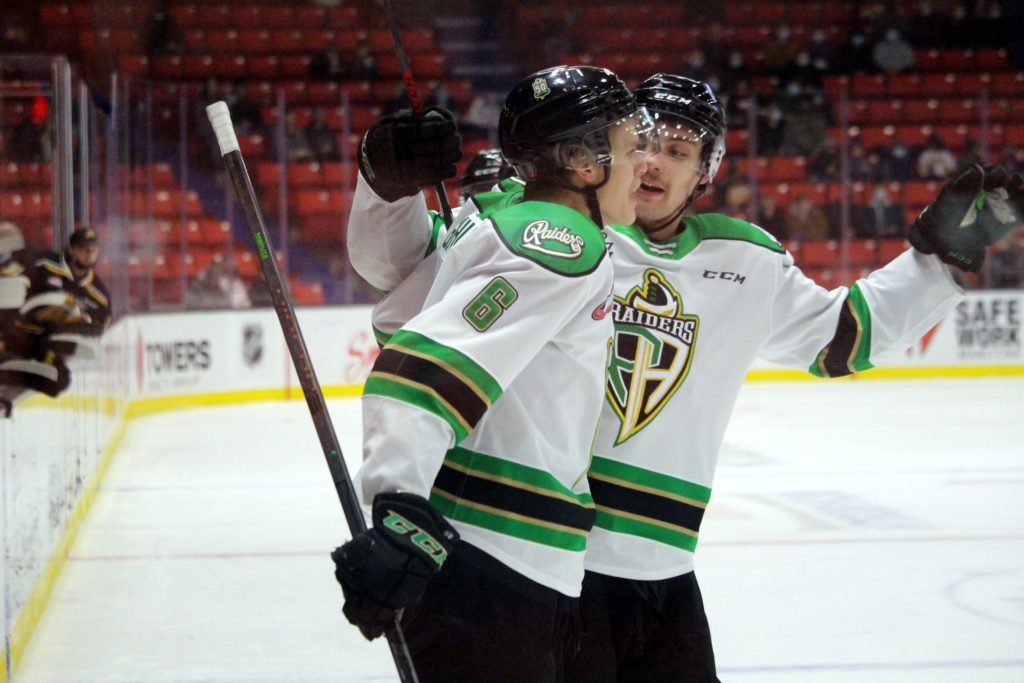 Brandon, Man. – Kaiden Guhle scored twice and Tikhon Chaika picked up the first win of his WHL career as the Prince Albert Raiders (7-12-0-1) earned a 2-1 win over the Brandon Wheat Kings (9-11-0-0) on Saturday night at Westoba Place.

The goals were Guhle’s first two of the season. His last goal came in his final game of the Hub Centre before departing due to injury. Chaika backstopped the Raiders to the win in his third start in the WHL.

Reece Vitelli nearly got the scoring started midway through the period. He forced a turnover near the blueline and cut in front of the chasing defender. He made a move to his forehand, but sent the attempt wide.

The Raiders eventually made the Wheat Kings pay for their penalty trouble. On Brandon’s third consecutive penalty, Guhle got the Raiders on the board. Vitelli won the faceoff back to Nolan Allan at the point. Allan sent it over to the Raiders captain and Guhle had time to load and fire a shot that beat Ethan Kruger for the blueliner’s first goal of the season.

The Captain gets in the goal column on the power play to open the scoring!#GoRaidersGo pic.twitter.com/1IG4f02KsW

The 1-0 score line held through the second period. The Raiders’ best chance came near the end of a late power play. Sloan Stanick held the puck on a two-on-one rush and tried to feed Vladislav Shilo just before the crease. The puck was deflected and found a trailing Tyson Laventure, but his attempt found the cross bar.

The Wheat Kings found the equalizer 7:42 into the third period. The puck hit the skate of a Wheat King in front of the team’s bench while they were changing. Nolan Ritchie collected it and snapped a shot past Chaika to level the score at 1-1.

The Raiders regained the lead less than two minutes later. A dump-in attempt led to all five Raiders on the ice touching the puck before it ended up in the Wheat Kings’ goal. Remy Aquilon dug it out of the corner to find Ozzy Wiesblatt, who chipped it out to Stanick. The Rapid City, Man. product spun and hit a streaking Evan Herman with a pass. Herman outwaited a sliding Wheat King defender and centered a pass for Guhle, who redirected his second goal of the game past Kruger.

Guhle finishes off the great passing play for his second of the game to give us back the lead!#GoRaidersGo pic.twitter.com/YBNlr0zCbN

In the final moments, the Wheat Kings pressed for the equalizer. However Chaika had the response between the pipes, including sliding to stop a last-ditch attempt by Nate Danielson at the horn.

That’s game! Raiders take this one 2-1 over the Wheat Kings in Brandon! Tikhon Chaika picks up the first win of his WHL career!

We’re back at it tomorrow as we head to Winnipeg to take on the ICE. Game time is 5 p.m. CST.#GoRaidersGo pic.twitter.com/tn73Kh7btZ

Chaika stopped 23 shots, including nine in the third period, to pick up the win. Kruger turned aside 33 Raider shots in the loss for the Wheat Kings.

The Raiders head to Winnipeg tomorrow evening to battle the ICE at Wayne Fleming Arena. Puck drop is 5 p.m. Catch the game on WHL Live or at The Rock And Iron Club House.

The next Raiders’ home game is on Friday night when they Regina Pats visit the Art Hauser Centre. Game time is 7 p.m. Tickets are available at the Raiders Office during open hours and at SaskTix.ca. 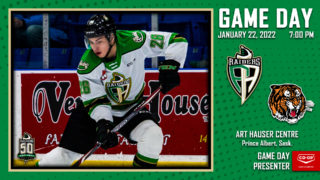