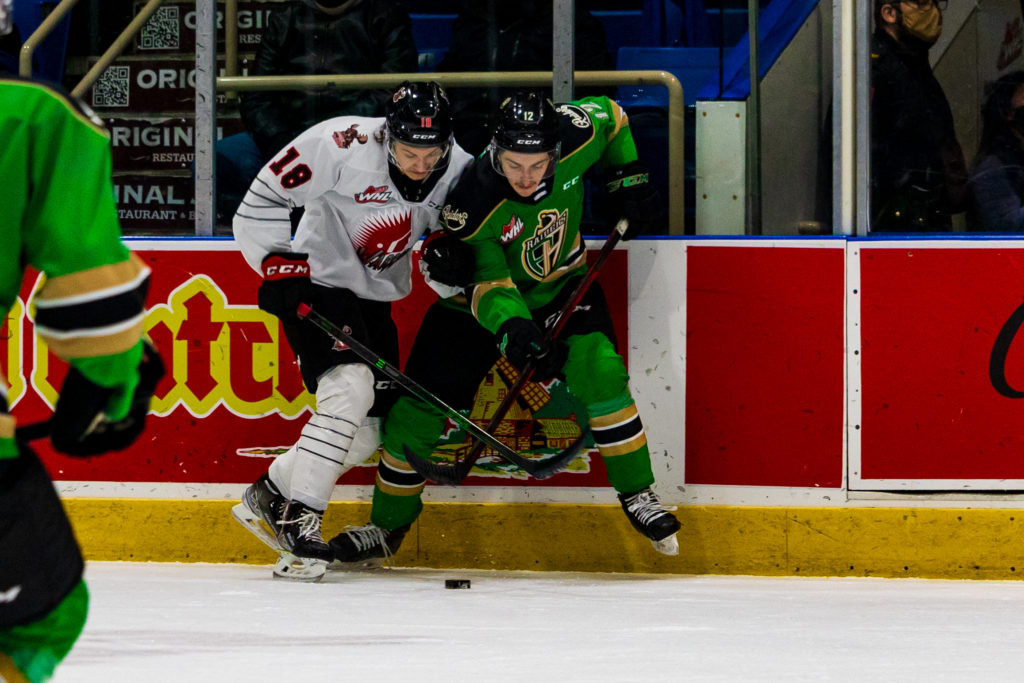 Tyson Laventure scored the lone goal for the Raiders in the loss.

The Warriors got all of their scoring in the opening period. Atley Calvert fired a shot on goal that was stopped by Carter Serhyenko, but the rebound found the stick of Eric Alarie. Alarie was able to bang in the rebound to make it 1-0 at the 1:15 mark.

Six minutes later, Daemon Hunt increased the Warriors’ lead. Calvert found Hunt pinching in from the blueline at the top of the left faceoff circle. The Minnesota Wild prospect put the puck past a sprawling Serhyenko to give the Warriors a 2-0 advantage.

With 5:23 left in the period, Logan Doust added another for Moose Jaw. Matthew Gallant’s shot from the right wing was kicked away by Serhyenko, but Doust found the rebound and got it past Serhyenko to increase Moose Jaw’s lead to three.

Related Links
GAME HIGHLIGHTS GALLERY POST-GAME INTERVIEWS
The Warriors’ fourth goal of the opening period came on the power play with 2:34 to play. Alarie fired a shot on goal that was stopped by Serhyenko. Calvert was on top of Serhyenko at the top of the crease and dug the puck out to the right where Maximus Wanner potted the loose puck. The goal ended Serhyenko’s night, who made nine saves in 17:26 of action.

Early in the second, Remy Aquilon sprung Sloan Stanick in on a partial breakaway with a chance to get the Raiders on the board. However, his wrist shot was turned away by Tetachuk.

The Raiders thought they got their first of the night late in the middle frame. Nolan Allan’s point shot on the power play was deflected in the slot by Hayden Pakkala, sending it past Tetachuk. The play was immediately waved off on the ice. After video review, the call on the ice stood.

In the third, the Raiders continued to fire on Tetachuk. Aquilon put a shot on goal that Stanick got a stick on, causing Tetachuck to juggle the puck before covering it. Kaiden Guhle also hit the cross bar after a one-timer set up by Ozzy Wiesblatt on the power play.

The Raiders eventually got on the board with 7:39 remaining in the contest on the power play. Aquilon’s shot from the top of the right faceoff circle found the cross bar. It ricocheted to Laventure’s feet before the Lloydminster, Alta. product was able to chop the puck past Tetachuk for his fifth goal of the season.

In total, the Raiders fired 23 shots on Tetachuk in the final frame as they pushed for more until the end. However, the score remained the same.

Tikhon Chaika was perfect in relief for the Raiders, stopping all 21 shots in just more than 42 minutes of action.

The Raiders head to Manitoba this weekend for their next action, beginning on Saturday night in Brandon against the Wheat Kings at Westoba Place. Puck drop is 7 p.m. Head to The Rock And Iron Club House or Original Joe’s to watch the game, or catch it on WHL Live on CHL TV.

The next Raiders’ home game is on Friday, December 3 when the Regina Pats make their second trip of the season to Prince Albert. Puck drop is 7 p.m. Tickets are available at the Raiders Office during working hours and at SaskTix.ca.