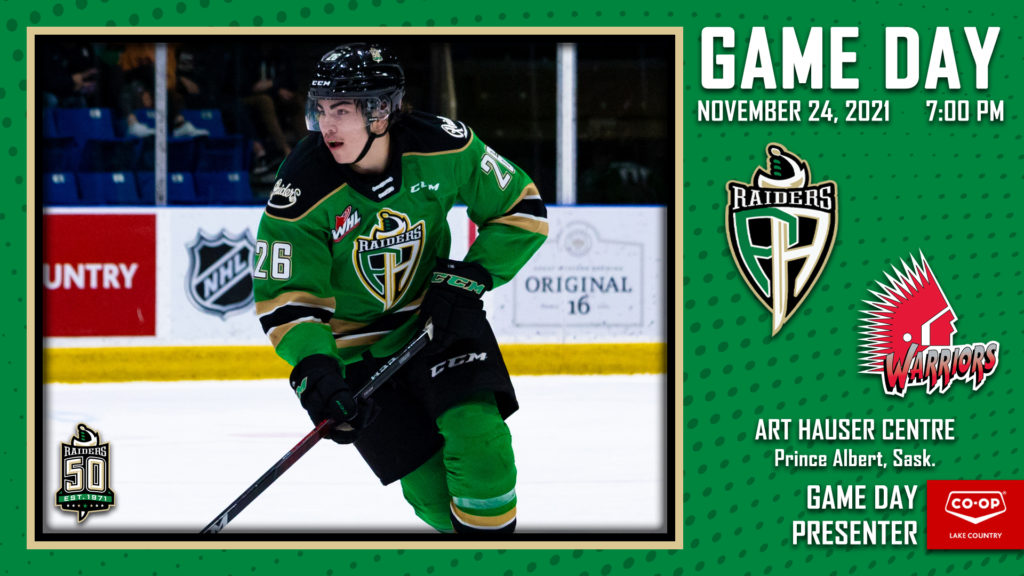 RAIDER REVIEW: The Raiders (6-11-0-1) host the Moose Jaw Warriors (7-10-0-1) tonight at the Art Hauser Centre. In their last action, the Raiders dropped a 5-1 game to the Rebels in Red Deer at the Peavey Mart Centrium. Evan Herman scored the lone goal for the Raiders, which came on a third-period power play. Carter Serhyenko stopped 18 shots while making his eighth-consecutive start.

Tonight is a Community Cares Fundraising night at the Art Hauser Centre. When purchasing your tickets online, $5 from every ticket will be donated to one of five organizations when you use the corresponding promo codes. The promo codes are:

CENTURY MARK: Evan Herman suited up in his 100th career WHL game on Saturday night in Red Deer against the Rebels. He celebrated the occasion by scoring the Raiders’ lone goal of the game. Hailing from The Pas, Man., Herman has 21 goals and 21 assists with 65 penalty minutes in his WHL career. A third-round pick of the Raiders, he has four goals and two assists in 18 games this season.

Related Links
Game Program Get Tickets
POWER-PLAY GOAL: Evan Herman’s goal also gave him two power-play markers on the season, bringing him into a four-way tie for tops on the team in that category. The Raiders’ power play has converted in each of the past three games. That ties the longest streak for consecutive power-play goals this season.

STREAKING: With an assist on Evan Herman’s goal on Saturday night, Landon Kosior extended his point streak to three games for the longest active streak on the team. The blueliner from Regina has three points over that span. Kosior has three goals and seven assists while playing in all 18 games this season.

FROM THE BLUELINE: Nolan Allan also assisted on Evan Herman’s goal, giving the Chicago Blackhawks prospect points in four of his past five games. The helper tied his career-best output for points with eight set during his rookie season in 2019-20. Allan has two goals and six assists this season in 15 games played.

UP NEXT: The Raiders head to Manitoba for the weekend, beginning on Saturday night in Brandon against the Wheat Kings. Game time is 7 p.m. CST. The Raiders return to the Art Hauser Centre for a date with the Regina Pats on Friday, December 3. Puck drop is 7 p.m. CST. Tickets are available at the Raiders Office and at SaskTix.ca.