Raiders End Weekend With Loss to Rebels in Red Deer 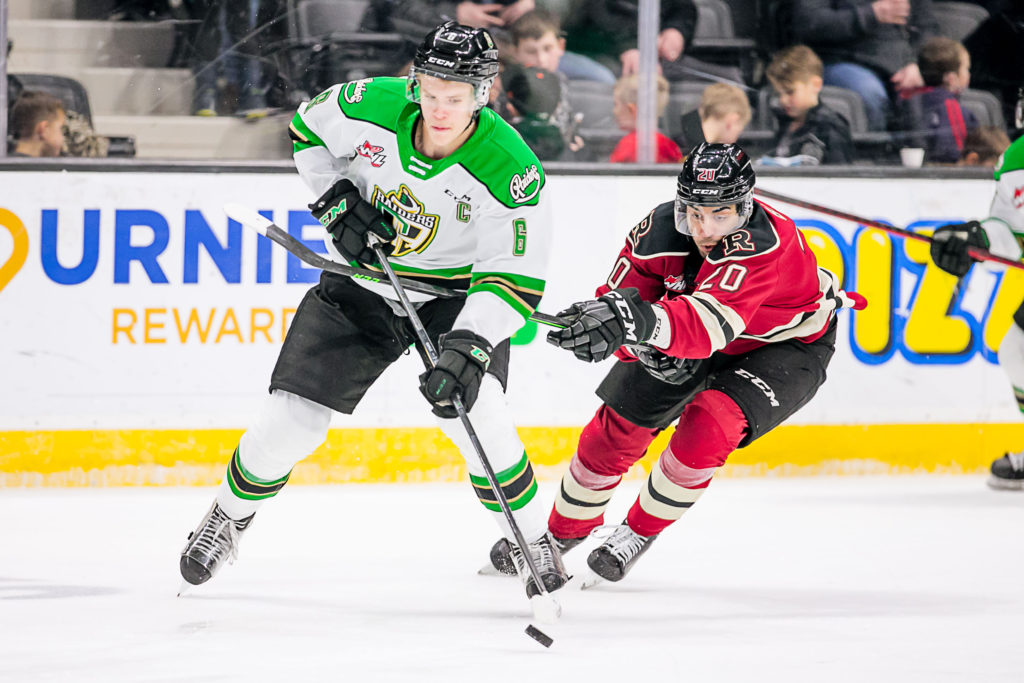 Evan Herman scored the lone Raiders’ goal of the contest late in the third period.

The Rebels opened the scoring 6:22 into the first period. Hunter Mayo’s shot from the right point missed the net, but ricocheted behind the goal to Kalan Lind at the left faceoff circle. Lind’s quick shot got past a sliding Carter Serhyenko to make it a 1-0 game.

With 4:58 to play in the frame, the Rebels added another. Arshdeep Bains’ pass to the slot got Ben King behind the Raiders’ defence and King snapped a shot by Serhyenko to put the Rebels up 2-0 after 20 minutes.

After a scoreless second period, the Rebels added to their lead 51 seconds into the third just after a power play expired. Serhyenko stopped Christoffer Sedoff’s point shot, but the rebound found the stick of Kai Uchacz in the slot. Uchacz buried the rebound to give Red Deer a 3-0 lead.

Two goals a minute apart in the third put the Rebels ahead 5-0. First, King tallied his second of the game when he finished off a crisp passing play with Bains and Jhett Larson. Then, Dallon Melin set up Uchacz with a backdoor feed to score his second of the period.

The Raiders had their chances to get on the board, especially in the third period. Ozzy Wiesblatt faked a shot and deked to his backhand, but Connor Ungar was able to stick with the paly. Vladislav Shilo had a pair of chances in the final frame with his best being a one-time attempt on the power play. However, Ungar was able to make the post-to-post save with his glove to keep the Raiders off the board.

Herman eventually solved Ungar with a late power-play goal. Landon Kosior fired a shot from the point that Ungar stopped, but wasn’t able to corral the rebound. Herman gathered the puck on the doorstep and deposited the rebound for his second power-play goal of the season and fourth overall, rounding out the scoring at 5-1.

Serhyenko made 18 saves for the Raiders in the loss; Ungar stopped 28 of 29 shots in goal for the Rebels.