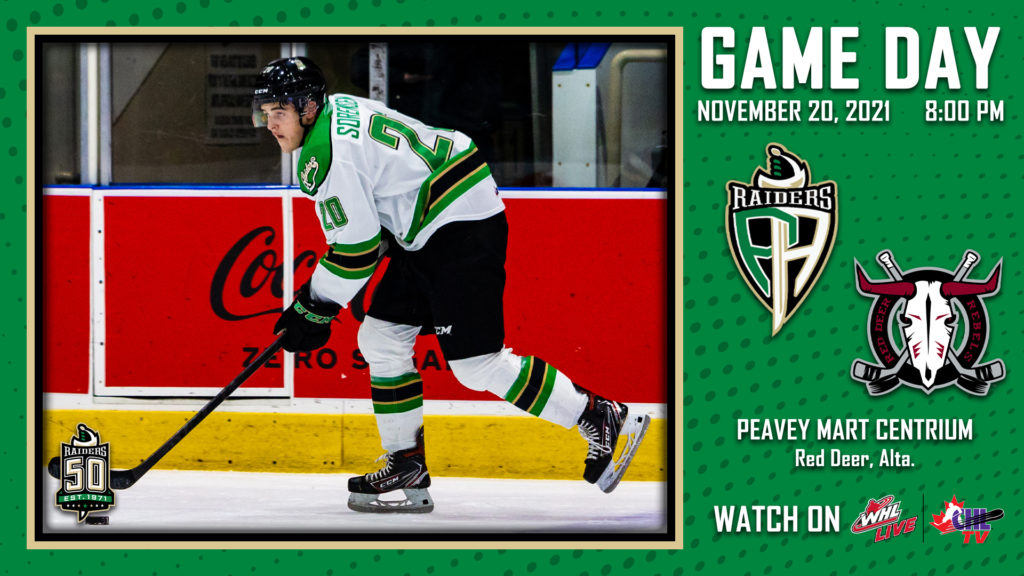 RAIDER REVIEW: The Raiders (6-10-0-1) head to Red Deer to take on the Rebels (13-6-1-0) tonight at the Peavey Mart Centrium. Last night at Rogers Place in Edmonton, the Raiders opened their weekend trip to Alberta with a 6-3 loss to the Oil Kings. Landon Kosior, Hayden Pakkala, and Reece Vitelli scored in the loss for the Raiders. Sloan Stanick chipped in with a pair of assists. Carter Serhyenko stopped 17 shots in the loss.

SHOOTING GALLERY: The Raiders fired a season-high 47 shots at the Oil Kings on Friday night in Edmonton. The Raiders have two games of recording 40 or more shots this season, with both coming against the Oil Kings.

DISHING ASSISTS: Sloan Stanick had a pair of assists in Friday’s game in Edmonton. It was the Rapid City, Man. product’s third multi-point game of the season and second since joining the Raiders. He has three goals and three assists in 10 games since being acquired by Prince Albert.

FILLING THE NET: Reece Vitelli tallied his team-leading seventh goal of the season on Friday night. The Winnipeg, Man. product is one goal shy of equalling his best total since joining the Raiders in the 2019-20 season.

POWER PLAY: Hayden Pakkala recorded his second power-play goal of the season on Friday night. Both of his goals on the man advantage have come against the Edmonton Oil Kings. He, Sloan Stanick, and Reece Vitelli are all tied for the team lead with two power-play goals each. Pakkala, has four goals and an assist this season.

REACHING THE MILESTONE: With an assist on the Raiders’ opening goal on Friday night, Ozzy Wiesblatt picked up the 150th point of his WHL career. The San Jose Sharks prospect now has 53 goals and 97 assists in his 167th career game. His assist also moved him into a tie for the team lead in points with 12, sharing the lead with fellow NHL first-rounder Kaiden Guhle.

UP NEXT: The Raiders return to the Art Hauser Centre on Wednesday night to take on the Moose Jaw Warriors. Puck drop is 7 p.m. Tickets are available at the Raiders Office during working hours and at SaskTix.ca any time.