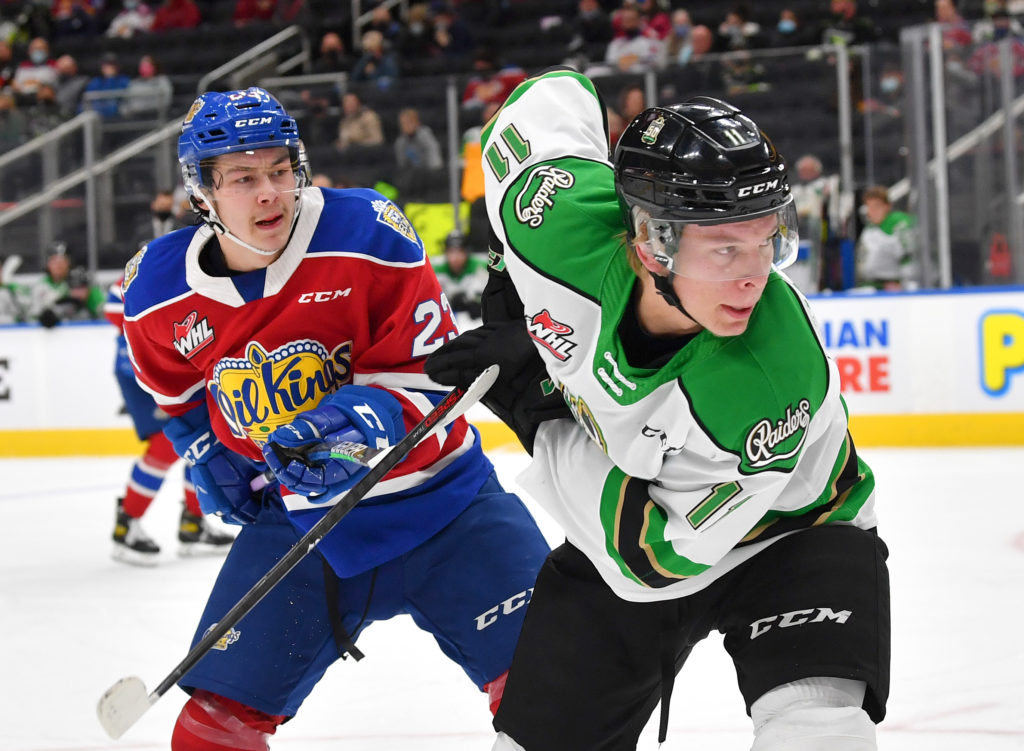 Landon Kosior, Hayden Pakkala, and Reece Vitelli all scored for the Raiders in the loss. Sloan Stanick chipped in a pair of assists.

The Raiders peppered Oil Kings goaltender Sebastian Cossa with shots in the first period. Their best chance came midway through the period. Ross Stanley’s pass from the right point found Cale Sanders to the left of the Oil Kings’ net. He made a pass back against the grain to Pakkala in the slot. Pakkala got a one-timer off, but Cossa got his left bad on the low shot.

Late in the opening period, the Oil Kings opened the scoring on the power play. Edmonton won a faceoff back to Luke Prokop at the blueline, who sent it to Simon Kubicek at the other side of the zone. His one-timer got through a moving Carter Serhyenko to put the Oil Kings ahead 1-0 with 1:06 left in the first.

The Oil Kings extended their lead 1:29 into the second period. Jalen Luypen’s shot was deflected in front by the stick of a Raider. Serhyenko wasn’t able to keep hold of the puck and Carter Souch was able to chip the puck over the Raiders netminder to make it a 2-0 game.

Edmonton added another when Jake Neighbours sprung Dylan Guenther on a two-on-one rush. Guenther elected to keep and fired a shot shortside that beat Serhyenko to give the Oil Kings a three-goal advantage.

The Raiders cut into the lead at the 7:29 mark of the frame with a power-play strike. Nolan Allan let a shot go from the point that hit the skate of an Oil Kings defender in front. The puck landed in the blue paint for Pakkala, who deposited it into the back of the net for his fourth of the season, making it a 3-1 contest.

Hayden Pakkala’s fourth of the season gets us on the board on the power play!#GoRaidersGo pic.twitter.com/ryCyLa50mJ

The Oil Kings responded just over a minute later. John Szabo forced a turnover along the boards in the Raiders’ end. His quick pass to the slot was one-timed past Serhyenko by Kobe Verbicky to restore Edmonton’s three-goal lead.

Related Links
GAME HIGHLIGHTS
Late in the period, Edmonton added another. Guenther was able to settle a pass down and slap a pass to the left post, finding Neighbours at the back door who one-touched it past Serhyenko to put the Oil Kings up 5-1 after two periods.

Tikhon Chaika replaced Serhyenko at the start of the third period. Serhyenko finished the game with 17 saves in his two periods of work.

Early in the third, the Raiders cut into the lead with a four-on-four goal. Kosior got the puck in the neutral zone and used his speed to split two defenders. He made a move to his backhand and lifted a shot over Cossa for his third of the season, bringing the Raiders back within three 3:48 into the third.

Landon Kosior gets behind the defence and goes backhand to beat Cossa!#GoRaidersGo pic.twitter.com/5KHO47e6rq

Hard work in the corner gets Reece Vitelli loose in front for his seventh of the season!#GoRaidersGo pic.twitter.com/zYwH0JWqoA

As the Raiders continued to press to make it a one-goal game, it was the Oil Kings that got the next goal. A quick shot from Jacob Boucher went off a Raiders defender in front, fooling Chaika as he was sliding to play the original trajectory of the shot to put the Oil Kings ahead 6-3.

Chaika stopped nine of 10 shots faced in relief in the third period, including a fantastic toe save on Josh Williams at the top of the crease.

Cossa stopped 44 shots for the Oil Kings, including 21 of 23 in the third as the Raiders fought to get back into the game.

The Raiders head to Red Deer tomorrow night to wrap up their weekend trip to Alberta with a game against the Rebels at the Peavey Mart Centrium. Puck drop is 8 p.m. CST. Catch the game on WHL Live on CHL TV, or head to The Rock & Iron Club House and Original Joe’s to watch.

The next Raiders’ home game is on Wednesday when the Moose Jaw Warriors visit the Art Hauser Centre. Game time is 7 p.m. CST. Tickets are available at the Raiders Office during working hours and any time online at SaskTix.ca.