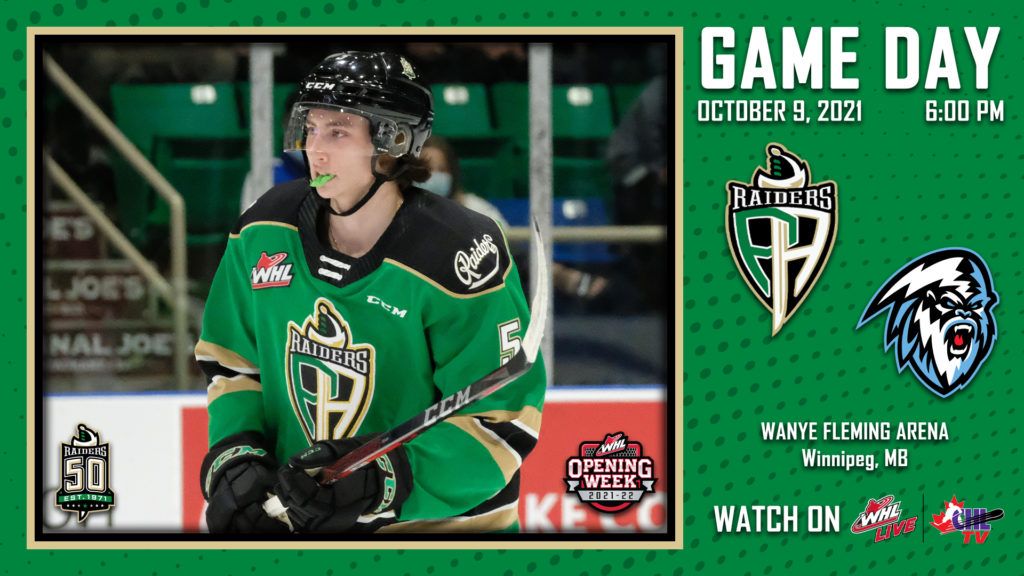 RAIDER REVIEW: The Raiders (0-3-0-0) wrap up their weekend trip to Manitoba tonight in Winnipeg against the ICE (3-0-0-0) at Wayne Fleming Arena. Last night in Brandon, the Raiders fell 5-2 to the Wheat Kings at Westoba Place. Terrell Goldsmith and Reece Vitelli were the Raiders’ goal scorers in the loss. Carter Serhyenko made his third consecutive start in goal for the Raiders, stopping 23 shots in the loss.

FROM THE BLUELINE: Terrell Goldsmith became the first Raiders’ defenceman to score this season when he got the Raiders on the board on Friday night in Brandon. It was the third goal of the Fort. St. James, BC product’s WHL career; he potted two goals in 14 games in the Subway Hub Centre last season.

Related Links
Listen on 101.5 Beach Radio Watch on WHL Live on CHL TV
BACK TO BACK: Reece Vitelli has scored in his first two games since re-joining the Raiders following his time with the Arizona Coyotes. The Winnipeg, MB product found the back of the net in the third period to extend his personal scoring streak to three games dating back to the 2021 finale of the Hub Centre.

THREE IN A ROW: Cale Sanders extended his point streak to a career-best three games on Friday night against the Wheat Kings. Sanders has an assist in each of the Raiders’ first three games this season and leads the team in scoring.

SNAPPING THE STREAK: Niall Crocker snapped a personal four-game pointless skid with an assist on Terrell Goldsmith’s goal in the first period of Friday night’s game.

COMING BACK: Defenceman Nolan Allan was returned to the Raiders from the Chicago Blackhawks on Friday afternoon. The Davidson product was drafted 32nd overall in the 2021 NHL Draft by the Blackhawks this July. He signed his entry-level contract with the club at the start of training camp.