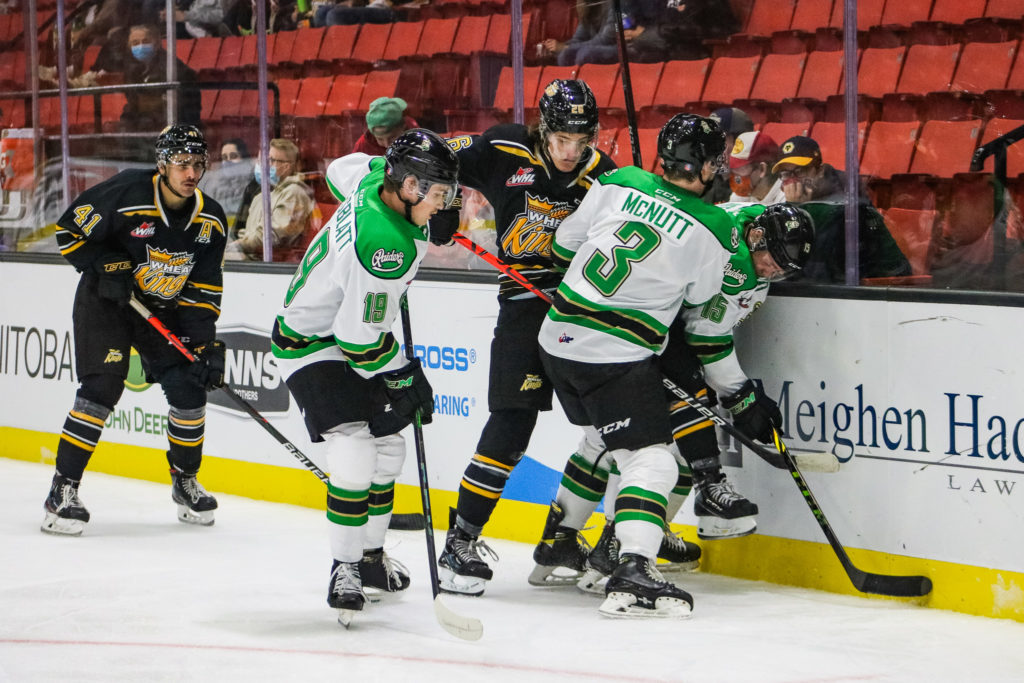 Terrell Goldsmith and Reece Vitelli found the back of the net for the Raiders in the loss. The Raiders have now lost three straight games to open the season.

Carter Serhyenko made some key saves early in the contest. His best came on a Wheat Kings’ power play. After a faceoff win in the Raiders’ end, Riley Ginnell found himself alone in front of Serhyenko. Ginnell cut to the left of the net, but Serhyenko kept his pad down and made the save on the Wheat King forward.

With 7:37 to go in the period, Brandon took the lead. Ben Thornton skated into a dump in off the end boards and beat Serhyenko on the short side to give the Wheat Kings the lead.

Just 17 seconds later, the Raiders evened things up. Goldsmith fired a shot through traffic that got past a screened Ethan Kruger for his first of the season, levelling the score at 1-1.

The Wheat Kings took the lead late in the period. Nolan Ritchie collected a turnover behind the goal and fed Ridly Greig at the side of the net. Greig was able to sneak it past Serhyenko as he tried to recover to the post to put Brandon up 2-1 after 20 minutes.

The Raiders had a chance to even things up early in second period. Hayden Pakkala led a two-on-one rush with Niall Crocker. The Okotoks, AB product kept and fired, but hit Kruger in the mask.

Related Links
Game Highlights
Midway through the period, Ginnell extended the Wheat Kings’ lead. He took a cross-zone pass from Tyson Zimmer and snapped a shot past Serhyenko to give Brandon a 3-1 advantage.

Before the end of the second, Greig tallied his second of the game to give the Wheat Kings a 4-1 lead. Brandon’s captain took a pass in the slot and put a shot on goal that got through traffic and past Serhyenko to put the Raiders down three heading into the third period.

In the third, the Raiders were able to cut the lead in half during a stretch of four-on-four play. Ozzy Wiesblatt dug the puck out behind the net and found Landon Kosior. The defenceman made a quick pass to Vitelli and the overager from Winnipeg wired a shot past Kruger for his second of the season, making it a 4-2 game.

About two minutes later, the Wheat Kings restored their three-goal advantage. After Quinn Mantei’s shot went wide of the goal, the puck bounced behind the net. Mantei found Thronton at the side of the goal from behind the net and Thornton found the empty side of the net for his second of the night to round out the scoring.

Serhyenko, making his third consecutive start, stopped 23 shots in the loss for the Raiders; Kruger stopped 19 Raider shots on goal for the win.

The Raiders end their Manitoba trip tomorrow night in Winnipeg against the ICE at Wayne Fleming Arena. Puck drop is 6 p.m. MT. Catch the game on 101.5 Beach Radio in Prince Albert or on WHL Live on CHL TV.

The next Raiders’ home game is on Friday, October 15 when the Moose Jaw Warriors visit the Art Hauser Centre. Game time is 7 p.m. Tickets are available at SaskTix.ca.