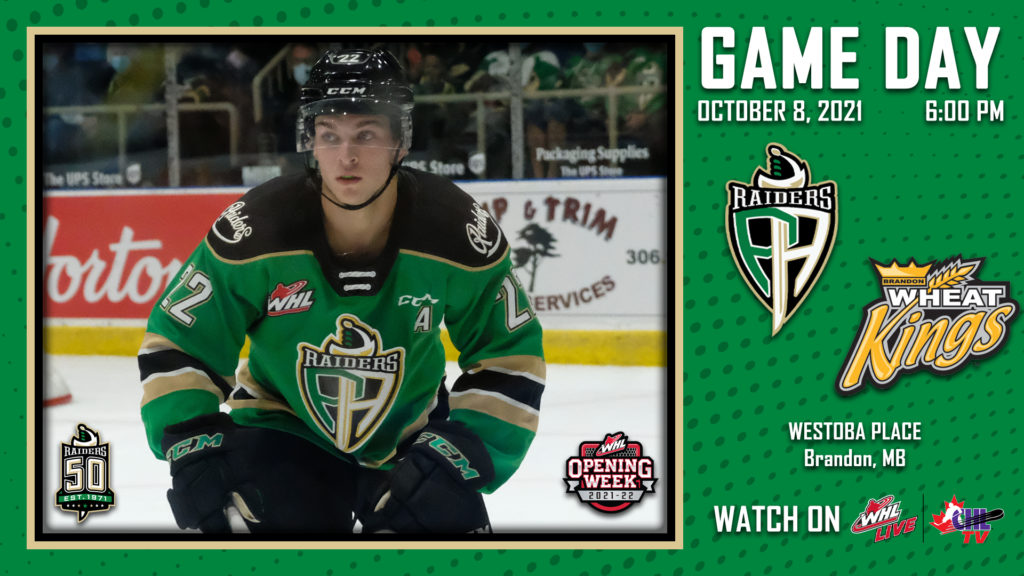 RAIDER REVIEW: The Raiders travel to Manitoba for the weekend, beginning tonight in Brandon against the Wheat Kings at Westoba Place. In their last outing, the Raiders fell 5-2 to the Regina Pats at the Brandt Centre on Saturday afternoon. Reece Vitelli and Ozzy Wiesblatt both scored for the Raiders in the loss. Carter Serhyenko made his second consecutive start, stopping 29 shots in defeat.

IMMEDIATE IMPACT: Both Reece Vitelli and Ozzy Wiesblatt scored in their season debut on Saturday afternoon against the Regina Pats after returning from NHL camps. They extended their point streaks dating back to last season in the Subway Hub Centre: Vitelli’s sits at six straight games, while Wiesblatt’s streak is at eight consecutive games.

HELPING HAND: Landon Kosior picked up his first assist since March 7, 2020 on Saturday afternoon against the Pats. The blueliner registered four goals in 21 games in the Hub Centre last year. The Regina product returned to Prince Albert from the Los Angeles Kings’ training camp in time for last week’s Home Opener.

STARTING STRONG: After not recording a point in the first 37 games in his WHL career, Cale Sanders recorded points in back-to-back games to start his Raiders’ career. The Claresholm, AB product had an assist in each contest against the Regina Pats over the opening weekend of the season. Sanders, who originally signed with the Pats prior to the 2018-19 season, signed with the Raiders after training camp.

UP NEXT: The Raiders wrap up their weekend trek to Manitoba tomorrow night in Winnipeg against the ICE at Wayne Fleming Arena. Game time is 6 p.m. MT. The next Raiders’ home game is on Friday, October 15 when the Moose Jaw Warriors visit the Art Hauser Centre. Game time is 7 p.m. MT. Tickets are available at SaskTix.ca.