Raiders Fall to Hurricanes in Lethbridge 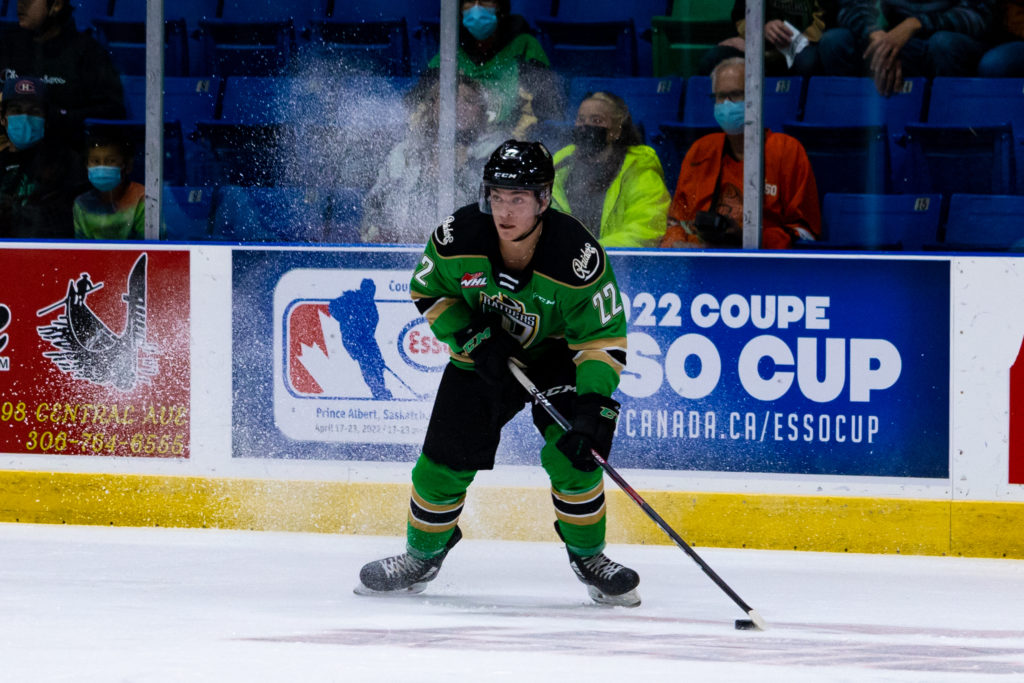 Evan Herman had a pair of goals for the Raiders, while Tyson Laventure had a goal and an assist in the loss.

The Hurricanes got on the board 2:17 into the contest. Ty Nash put a shot on goal that was stopped by Tikhon Chaika, who was making his first start in the WHL. The rebound fell to Alex Thacker who carried the puck across the net and slid it past an outstretched Chaika.

About two minutes later, the Raiders evened things up with a power-play goal. Kaiden Guhle set up Tyson Laventure with a one-timer. Jared Picklyk made the save but he was unable to corral the rebound. Herman was at the top of the crease and was able to jam the rebound past Picklyk for his first of the season.

Evan Herman gets his first of the season to tie things up!#GoRaidersGo pic.twitter.com/qHAky12YWq

Herman tallied his second of the game during a four-on-four situation. He carried the puck in along the left wing and used his speed to get a step on the defender. Herman’s shot from the wing beat Picklyk at the 8:20 mark to give the Raiders a 2-1 lead.

Off the rush and in the net for Herman’s second of the game!#GoRaidersGo pic.twitter.com/ZPm6DrCwgE

Late in the first, Lethbridge responded with a power-play goal of their own. Noah Boyko found the puck at the top of the slot off a broken play and fired a shot through traffic that got past Chaika to make it a 2-2 game after 20 minutes.

The score held until the final two minutes of the second period. Michael Horon took a hit near the Hurricanes’ blueline to send Tyson Laventure on a breakaway. Laventure made a move to his forehand and lifted a shot over Picklyk’s glove for his first of the year in his second game back from injury, putting the Raiders up 3-2 after two periods.

Tyson Laventure’s goal is the only one of the period as we take a 3-2 lead after 40 minutes.

The Raiders ran into penalty trouble in the third period, opening the door for the Hurricanes. While on a two-man advantage, Alex Cotton drew the attention of two of the Raiders on the ice. He made a pass to Yegor Klavdiev who one-timed it past Chaika from the wing to tie things up with 5:21 to play.

With 1:11 left in the third, Lethbridge took the lead. Thacker dropped a pass to Nash on the wing. He made a return pass to Thacker and the Hurricanes forward scored his second of the game to put the Hurricanes up 4-3.

Justin Hall added an empty net goal with 24 seconds remaining to give the Hurricanes the 5-3 win.

Chaika finished the game with 24 saves in his first WHL appearance. Picklyk stopped 28 Raider attempts to pick up the win.

The Raiders are off until Friday night when they take on the Brandon Wheat Kings to start a home-and-home series. Puck drop is 7 p.m. Tickets are available at the Raiders Office and at SaskTix.ca.