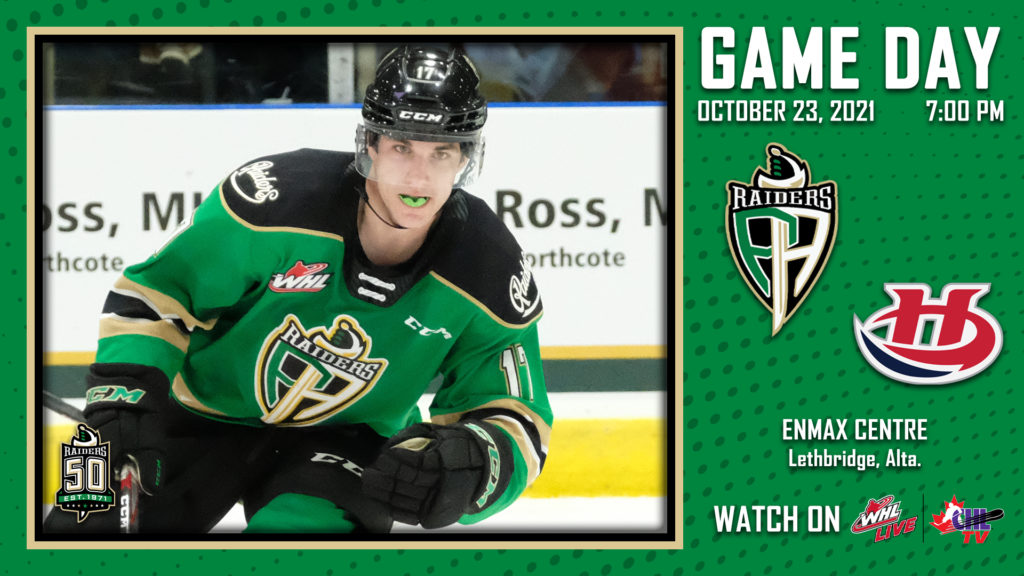 RAIDER REVIEW: The Raiders (2-6-0-0) finish up their weekend trip to Alberta tonight in Lethbridge against the Hurricanes (3-3-0-0) at the ENMAX Centre. Last night in Medicine Hat, the Raiders were downed 6-2 by the Tigers at Co-op Place. Dallyn Peekeekoot and Hayden Pakkala each picked up their first goal of the season in the loss. Carter Serhyenko stopped 40 shots in a losing effort.

ON THE BOARD: Dallyn Peekeekoot snapped a nine-game scoring drought on Friday night against Medicine Hat when he tallied his first goal of the season. Peekeekoot’s last goal came in the Subway Hub Centre on April 24 against the Brandon Wheat Kings. As an affiliate last season, Peekeekoot registered four goals and two assists in 15 games in Regina.

Related Links
Listen on 101.5 Beach Radio Watch on WHL Live on CHL TV
GETTING HIS FIRST: Hayden Pakkala scored his first WHL goal in Medicine Hat on Friday night. Pakkala, who was acquired by the Raiders at the end of the WHL Pre-Season, has played in all eight of the Raiders games this season. It was his first point since recording an assist in the Raiders’ home opener against the Regina Pats on October 1.

BACK IN THE LINEUP: Tyson Laventure returned to the Raiders lineup on Friday night in Medicine Hat after suffering an injury in the WHL Pre-Season. Last season, the Lloydminster, Alta. product had five goals and three assists in 23 games in the Hub Centre to tie a career high for goals in a season.

MAKING THEIR DEBUTS: Vladislav Shilo and Ross Stanley made their Raider debuts on on Friday night against the Tigers. Shilo, the Raiders’ pick in the 2020 Import Draft, had two penalty minutes in his first WHL game. Stanley got in the lineup with the Raiders after being acquired by Prince Albert last weekend from the Edmonton Oil Kings.

UP NEXT: The Raiders return to the Art Hauser Centre to open a home-and-home series with the Brandon Wheat Kings on Friday night. Game time is 7 p.m. Tickets are available at SaskTix.ca and at the Raiders Office.