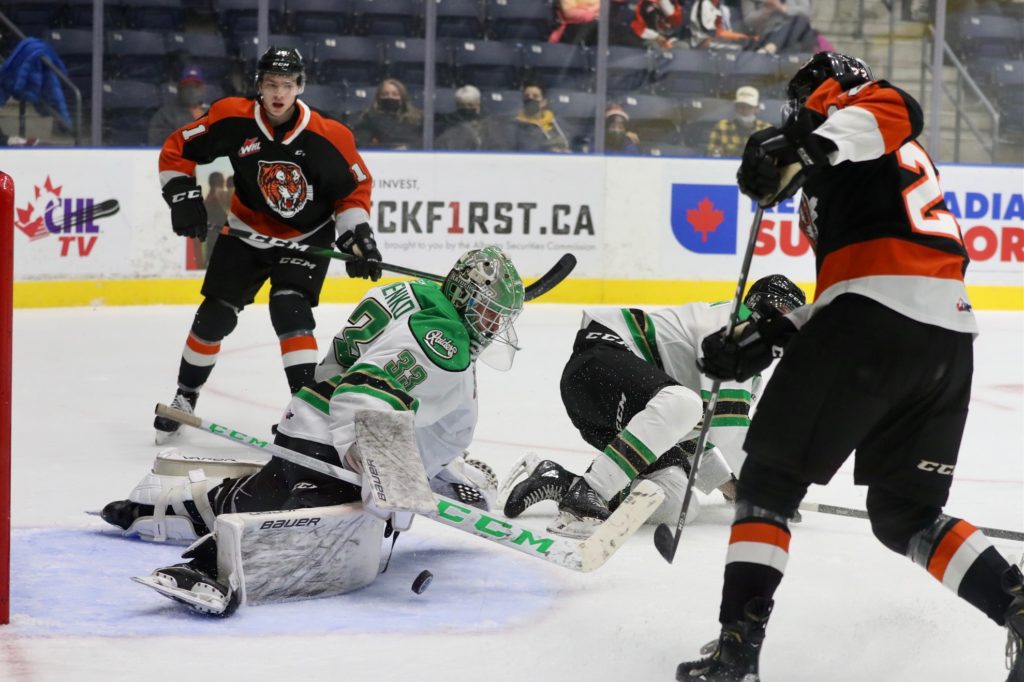 Dallyn Peekeekoot and Hayden Pakkala scored the Raiders’ goals in the loss, both of which scored their first of the season.

While the Tigers had the only power play of the first period, the Raiders had the two best offensive chances. Both Ozzy Wiesblatt and Evan Herman had shorthanded breakaways during the penalty, but both were stopped by Beckett Langkow.

At the 9:18 mark of the first, the Tigers opened the scoring. Oren Shtrom forced a turnover in the Raiders end and fired a shot over Carter Serhyenko to give Medicine Hat a 1-0 lead.

Exactly two and a half minutes later, the Raiders responded in a similar fashion. Dallyn Peekeekoot intercepted a pass in the slot in the Tigers end. He made Medicine Hat pay and snapped a shot that beat Langkow’s glove hand to make it a 1-1 game at the intermission.

The Raiders took the lead 4:30 into the second period. Landon Kosior put a shot on goal that was stopped by Langkow, but traffic in front of the goal didn’t allow the goaltender to jump on the rebound. Pakkala collected the puck and put a backhander past Langkow for his first WHL goal, putting the Raiders ahead 2-1.

Hayden Pakkala nets his first WHL goal to give us the lead!#GoRaidersGo pic.twitter.com/HTwV4cN2kX

Midway through the second, Medicine Hat levelled the score near the end of a power play. Daniel Baker’s shot from the point was deflected by Oasiz Wiesblatt on its way to the net to get it past Serhyenko.

The Tigers regained the lead with 7:09 to go in the period. Oasiz Wiesblatt threw a puck to the front of the goal. Teague Patton shovelled a puck towards the net with traffic in front of Serhyenko. As the Raiders goaltender was battling to find the puck, it found its way past him and slid just over the goal line to make it 3-2 for Medicine Hat.

Less than a minute later, Medicine Hat struck again to make it 4-2. On a rush into the zone, Brayden Boehm put a shot into Serhyenko’s pads aiming to create a rebound. Serhyenko made the stop, but the puck found the stick of Steven Arp who buried his first WHL goal to double the Tigers’ lead after two periods.

The Raiders pressed for the next goal to start the third period, but it was the Tigers that extended their lead with another power-play goal with 8:24 remaining. Owen MacNeil made a pass from the right side of the goal to Corson Hopwo at the left faceoff circle. Hopwo one-timed the pass past a sliding Serhyenko to make it 5-2.

Noah Danielson rounded out the scoring with 2:16 to play. Standing at the top of the crease, he tipped home Lukas Svejkovsky’s shot from the high slot.

Serhyenko finished the game with 40 saves in a losing effort. Langkow stopped 26 Raider attempts to pick up the win for the Tigers.

The Raiders are back at it tomorrow night as their weekend trip into Alberta ends in Lethbridge against the Hurricanes. Game time at the ENMAX Centre is 7 p.m. Catch the game on WHL Live on CHL TV or on 101.5 Beach Radio with Rob Mahon.

The next home game for the Raiders is Friday, October 29 when they take on the Brandon Wheat Kings to start a home-and-home series. Puck drop is 7 p.m. Tickets are available at the Raiders Office and at SaskTix.ca.