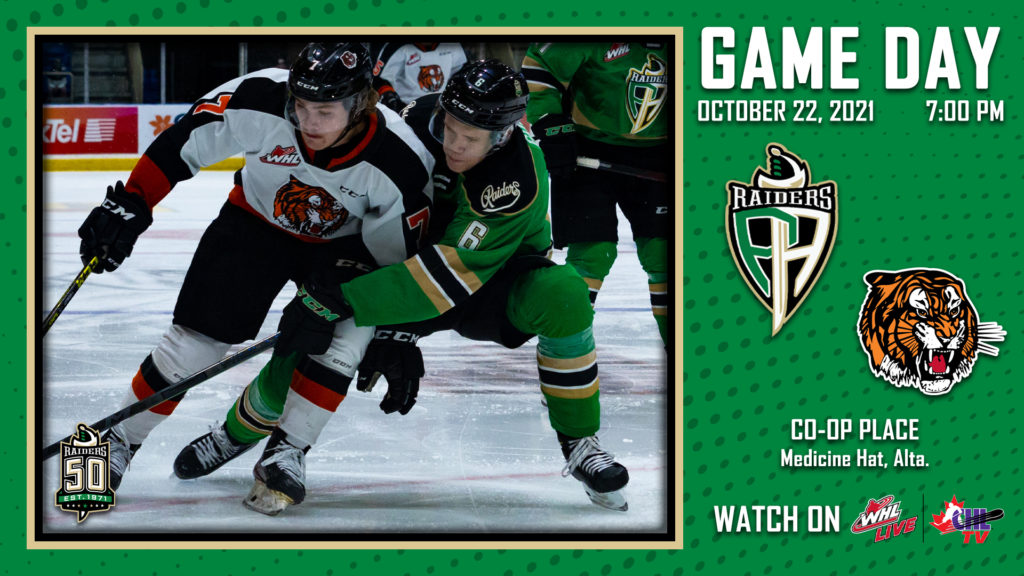 RAIDER REVIEW: The Raiders (2-5-0-0) head to Alberta this weekend as they take on the Tigers in Medicine Hat at Co-op Place. In the Raiders’ last outing, they knocked off the Tigers 3-2 in a shootout at the Art Hauser Centre. Cale Sanders and Ozzy Wiesblatt scored in regulation, while Kaiden Guhle and Reece Vitelli tallied in the shootout. Carter Serhyenko stopped both shooters in the shootout and made 25 saves in the win.

FIRST THINGS FIRST: Cale Sanders scored the first WHL goal of his career on Saturday night against the Tigers when he tipped home Remy Aquilon’s shot on the power play. Earlier this season, Sanders recorded his first WHL point against his former team. The Claresholm, Alta. product has recorded all of his WHL points since signing with the Raiders after training camp.

SHOOTOUT SUCCESS: The Raiders played and won their first shootout of the season on Saturday against the Tigers. It snapped a streak of five consecutive shootout losses. Prior to Saturday, the last Raiders’ shootout win came on Friday, October 25 in Kennewick, Wash. against the Tri-City Americans.

NEW STREAK: After having his points streak stopped, Ozzy Wiesblatt has responded by scoring  in three consecutive games to take over the team lead in goals and points. The San Jose Sharks prospect has six points in six games and was only held off the scoresheet once so far this season since returning to the Raiders.

ROSTER NEWS: The Raiders acquired 2004-born defenceman Ross Stanley from the Edmonton Oil Kings on Sunday afternoon in exchange for 2004-born defenceman Graydon Gotaas and a conditional pick in the 2024 WHL Prospects Draft.  Stanley dressed in three games for the Oil Kings this season. In the shortened 2021 year, he had an assist in 18 games.