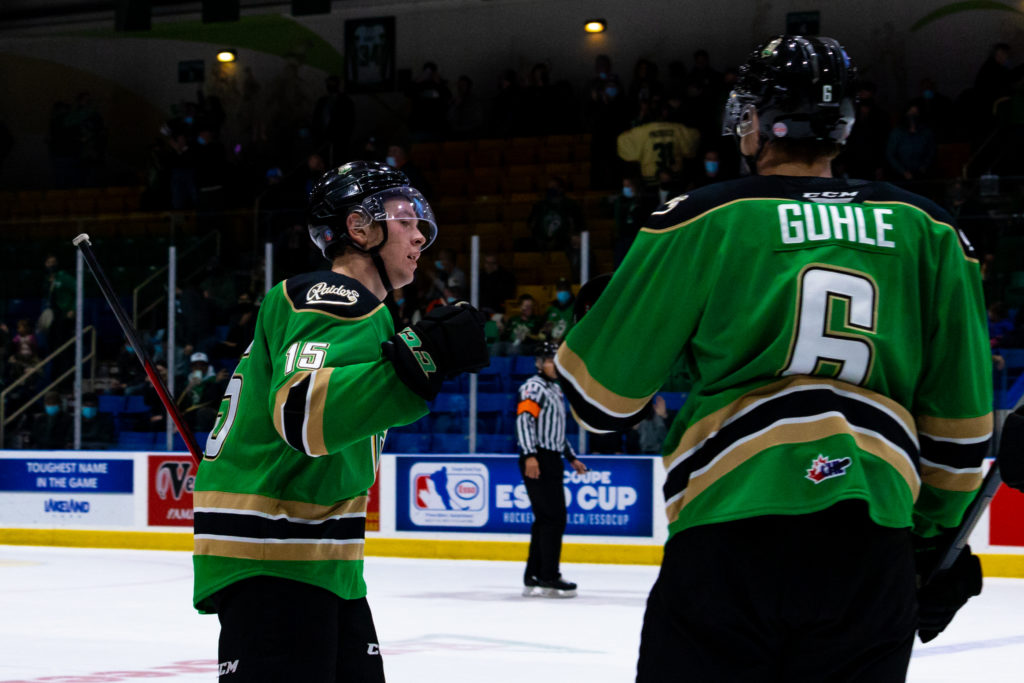 Prince Albert, Sask. – Kaiden Guhle and Reece Vitelli scored in the shootout while Carter Serhyenko stopped both shooters he faced as the Prince Albert Raiders (2-5-0-0) downed the Medicine Hat Tigers (2-3-0-1) 3-2 in a shootout on Saturday night at the Art Hauser Centre.

Cale Sanders and Ozzy Wiesblatt found the back of the net in regulation for the Raiders. Along with his shootout goal, Vitelli also picked up an assist in the win.

In the first contest between the two teams since February 5, 2020, the Tigers drew opened the scoring started 1:27 into the game. Aidan Brook fired a shot from the point that Serhyenko turned aside. However, the rebound fell to Oren Shtrom who moved to his left and slid the puck past a sliding Serhyenko to open the scoring.

After controlling most of the second period, the Raiders tied things up with 4:55 to play in the middle frame. Off a faceoff in the Tigers’ end on a power play, Remy Aquilon’s point shot was redirected in front by Cale Sanders past Beckett Langkow for his first WHL goal.

Late in the period, the Raiders took their first lead of the game. Wiesblatt led a rush into the zone and hit Vitelli with a cross-zone pass. Vitelli’s shot was stopped by Langkow, but the rebound bounced past Evan Herman at the top of the crease. Wiesblatt followed up the play and deposited the loose puck for the San Jose Sharks prospect’s fourth goal of the season, putting the Raiders up 2-1 after two periods.

The Tigers drew even 4:08 into the third period. Noah Danielson forced a turnover near the blueline on a Raiders’ power play and escaped on a shorthanded breakaway. Serhyenko got a piece of Danielson’s shot but it wasn’t enough to keep it out of the net as the Tigers made it a 2-2 game.

Keaton Sorensen nearly ended the game in regulation as he tipped the puck past a Tigers defenceman to spring himself on a breakaway. He made a move to his backhand to slide it past Langkow, but the Tigers goaltender got the post and kept his pad down to keep it out to send the game to overtime.

In the extra frame, Vitelli had two quality chances to end the game. First, he lost the handle on a breakaway. Later in the period, Wiesblatt set him up with a backdoor pass, but Langkow was able to get to the post to make the save.

At the other end, Serhyenko’s best save of the period came on a Dru Krebs breakaway. The Raiders goaltender turned aside a five-hole attempt then stayed with the play to deny the rebound and force the game to be decided in a shootout.

Serhyenko was able to stop both Shtrom and Lukas Svejkovsky on their attempts. Guhle made a move to his forehand and outwaited Langkow to get the Raiders on the board in the shootout. Then Vitelli sealed the win for the Raiders when he lifted his backhand attempt over a sliding Langkow.

Along with the two shootout stops, Serhyenko made 25 saves in regulation and overtime. Langkow made 37 saves in the Tigers’ goal.

The Raiders are off until Friday night when they make their first trip to Alberta since the 2019-20 season for a rematch with the Tigers in Medicine Hat. The following night, they head to Lethbridge to square off with the Hurricanes. Both games begin at  7 p.m. MT and can be streamed on WHL Live on CHL TV.

The next Raiders’ home game is on Friday, October 29 when the Brandon Wheat Kings visit the Art Hauser Centre. Game time is 7 p.m. MT. Tickets are available the Raiders Office, Monday to Friday from 9 a.m. to 5 p.m. and anytime at SaskTix.ca.