Raiders Pick Up First Win of the Season in Moose Jaw 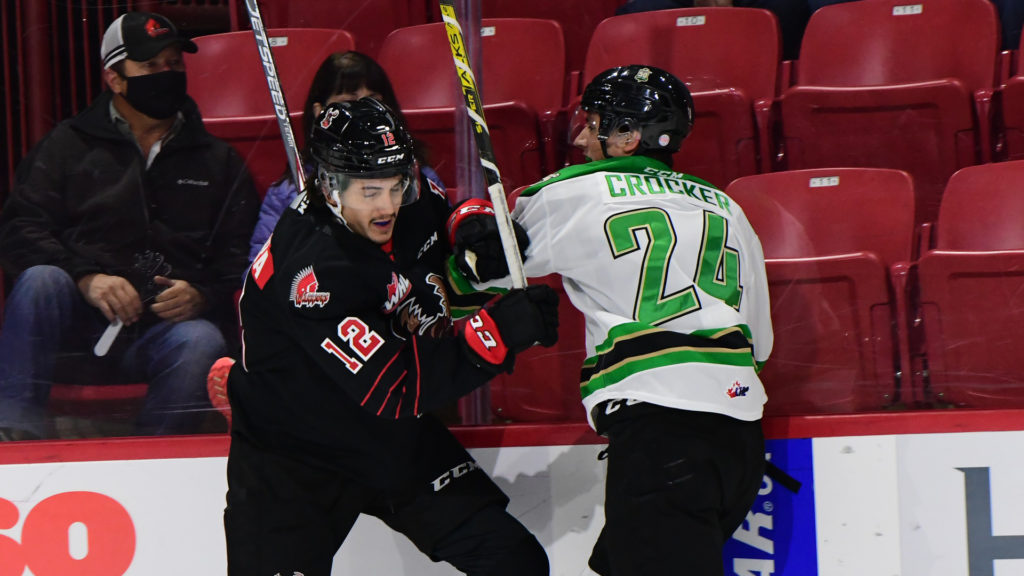 Moose Jaw, Sask. – Kaiden Guhle and Ozzy Wiesblatt each had two points as the Prince Albert Raiders (1-4-0-0) picked up a 3-2 win over the Moose Jaw Warriors (2-2-0-0) on Wednesday night at Mosaic Place.

Guhle had a pair of assists in his return to the Raiders’ lineup, while Wiesblatt had a goal and an assist. Niall Crocker and Reece Vitelli also scored as the Raiders snapped their four-game losing streak to start the season.

The teams played to a scoreless first period. Carter Serhyenko kept the Warriors at bay in the first period as he blanked the home team on two power-play attempts, stopping all eight shots faced in the frame.

The Raiders struck first 4:12 into the second period. Guhle’s shot from the point was tipped in front of a crowded crease by Wiesblatt for the San Jose Sharks prospect’s second goal of the campaign.

About two minutes later, Vitelli struck on the power play to give the Raiders a 2-0 advantage. Evan Herman was able to hook a pass from the right side of the net to a cutting Vitelli whose one-timer beat Carl Tetachuk for the Winnipeg, Man. product’s third of the season.

Reece Vitelli strikes early on the power play for his third of the season.#GoRaidersGo pic.twitter.com/w8P2a9hl3i

With 6:09 to go, the Raiders extended their lead. Hayden Pakkala won a faceoff in the Warriors’ end to Remy Aquilon. The overage defenceman sent it to Guhle at the opposite point. The Montreal Canadiens prospect put a shot towards net that was tipped in front by Crocker for his first WHL goal.

Early in the third period, the Raiders were able to kill off a two-man advantage to keep their three-goal lead.

The Warriors got on the board late in the third period while on a five-minute power play after Sloan Stanick was given a major penalty and a game misconduct for goaltender interference. Off the ensuing faceoff, Warriors captain Daemon Hunt fired a shot through traffic that ended Serhyenko’s shutout bid with 4:07 to play, making it a 3-1 game.

Moose Jaw struck again with 1:09 left in the third while still on the five-minute power play. After several blocked shots by the Raiders, the puck found its way to Denton Mateychuk at the point. His blast got through the bodies in front of the goal and past Serhyenko to bring the Warriors back within one.

It was as close as they came as the Raiders held off the Warriors’ push, in part to several Raiders sacrificing their bodies to block shot. A late block by Vitelli sent the puck into the corner to end the game.

Serhyenko finished the game with 20 saves to pick up his first win of the season. Tetachuk stopped 23 shots in the loss for the Warriors.

We’ll host the Warriors in the rematch on Friday night at the Art Hauser Centre. Game time is 7 p.m.#GoRaidersGo pic.twitter.com/mPJUGXPiEB

The Raiders return to the Art Hauser Centre on Friday for the first of two home games this weekend for the second leg of their home-and-home series with the Warriors. On Saturday night, the Raiders welcome the Medicine Hat Tigers to town for their first game against an Alberta-based team since March 3, 2020.

Both weekend games begin at 7 p.m. Tickets are available at SaskTix.ca and at the Raiders Office.