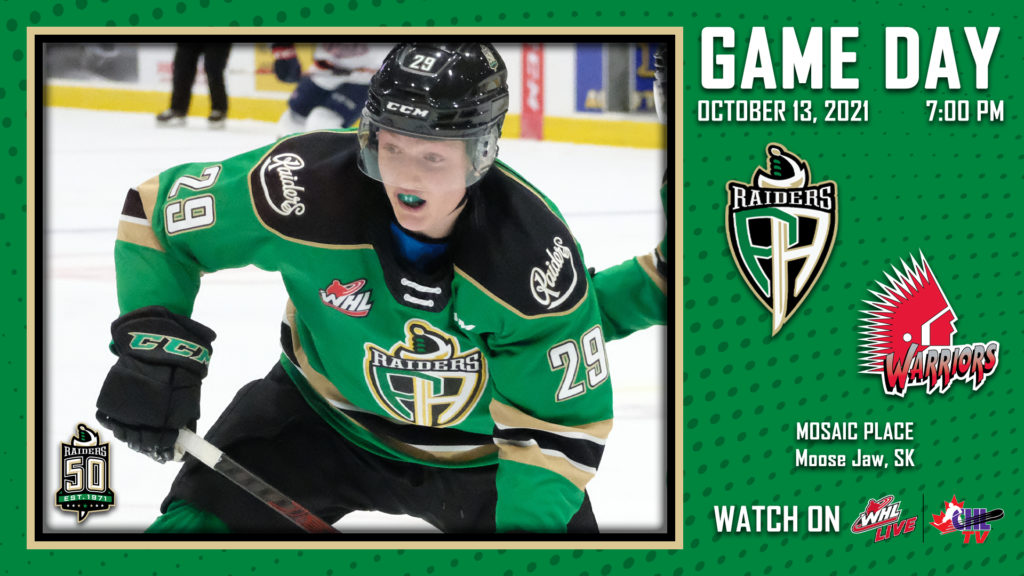 RAIDER REVIEW: The Raiders open a home-and-home series with the Moose Jaw Warriors tonight at Mosaic Place. On Saturday night in Winnipeg, the Raiders lost an 8-0 game to the ICE at Wayne Fleming Arena. Ronin Geraghty made his Raiders debut in the game, stopping 26 shots. Gage Alexander made 13 saves for Winnipeg. Evan Herman and Reece Vitelli each had three shots on goal for the Raiders.

MAKING HIS DEBUT: Defenceman Nolan Allan made his season debut with the Raiders on Saturday night in Winnipeg after being returned to Prince Albert by the Chicago Blackhawks. Allan had a goal and an assist in 16 games last season in the Subway Hub Centre before leaving to win a gold medal at the IIHF U18 World Championships with Canada.

COMING BACK: Defenceman Kaiden Guhle was returned to the Raiders by the Montreal Canadiens on Monday afternoon. Guhle was selected 16th overall in the 2020 NHL Draft by the Canadiens. Last season, Guhle was limited to two games with the Raiders in the Hub Centre due to injury.

RAIDERS ACQURIE STANICK: The Raiders acquired 2003-born winger Sloan Stanick from the Regina Pats on Tuesday in exchange for 2003-born defenceman Adam McNutt. Stanick, a product of Rapid City, MB, had two goals and two assists in five games with the Pats this season. In 78 career games in the WHL, Stanick has five goals and nine assists with 19 penalty minutes.

UP NEXT: The Raiders close out the home-and-home series with the Warriors on Friday night at the Art Hauser Centre. Game time is 7 p.m. MT. Tickets are available at SaskTix.ca.