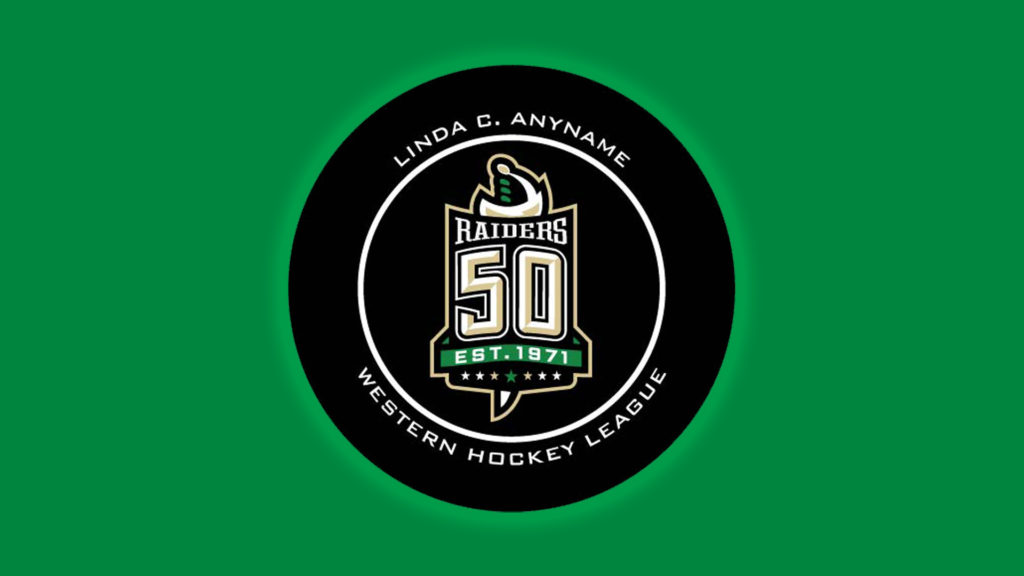 Prince Albert, SK – To celebrate the 50th Season of Raider Hockey, the Raiders are offering you the once-in-a-lifetime chance to be part of the action.

Any Raider fan can have their name, a family member’s name, or the name of someone to pay tribute to celebrate the life and work of a loved one on five official WHL game pucks for the 2020-21 season.

Each person who participates in this program will receive one of the five pucks in a puck display box along with a Letter of Authenticity stating that your remaining four pucks will be used in an official WHL game during the 2020-21 season. They are also guaranteed to receive a second puck which has been used during a game.

Should a Raiders goal be scored when your puck is in play, it shall be immediately be removed from the game, autographed by the player who scored the goal following the game, and returned to you.

If a goal is scored with the fans’ named game puck and it coincides with a milestone for the player (i.e. first WHL goal, 100th point, 50th goal of the season, etc.), then you will receive an autographed picture of the player holding that puck.

Only 100 of these packages will be made available this season. The limited run ensure that all pucks will be used during play this season or, if need be, the 2021 WHL Playoffs. The cost of the package is $100 (tax incl). The deadline to purchase your package is Friday, October 16.

To sign up for this package, please email Michael Scissions (scissons@raiderhockey.com) or visit the Raiders Office.