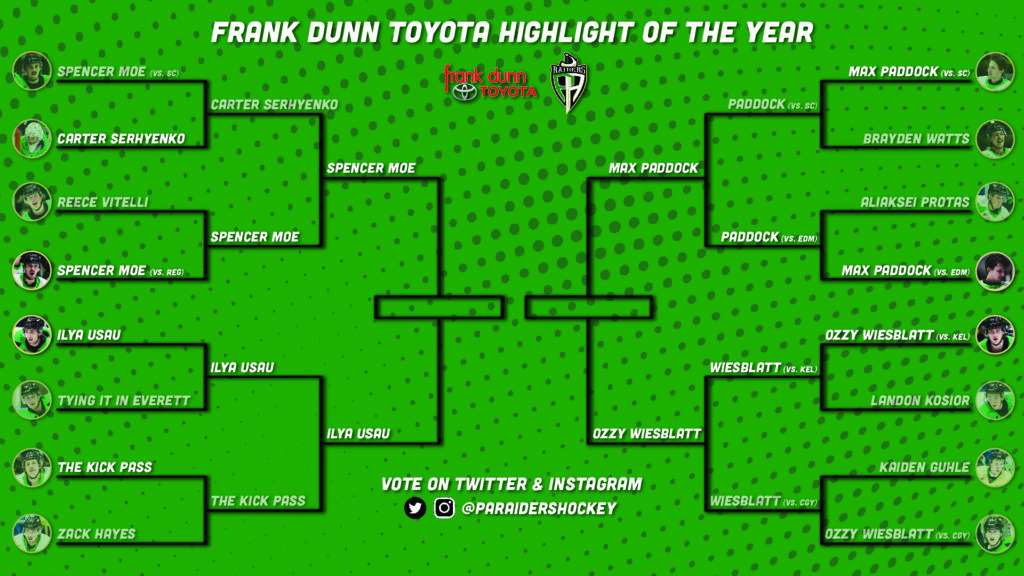 The semifinalists have been determined in the Frank Dunn Toyota Highlight of the Year Tournament. Here’s our semifinal schedule:

Here’s how we got the four semifinalists. The quarter-finals saw voting extend to Instagram to go along with Twitter. In the first quarter-final matchup, Spencer Moe got his revenge on Carter Serhyenko when his give-and-go goal against the Regina Pats took out the rookie netminder’s sprawling stop in Moose Jaw against the Warriors.

The third quarter-final matchup had Ilya Usau’s dangle through the Rebels’ defence in Red Deer end the run of “The Kick Pass” from Aliaksei Protas to Brayden Watts, who then batted his own rebound out of the air.

Related Links
Frank Dunn Toyota Highlight of the Year Page Instagram Twitter
It was another single-player showdown in the final quarter-final with this one featuring two Ozzy Wiesblatt goals. Wiesblatt’s power-play goal against the Kelowna Rockets took down his overtime winner against the Calgary Hitmen.