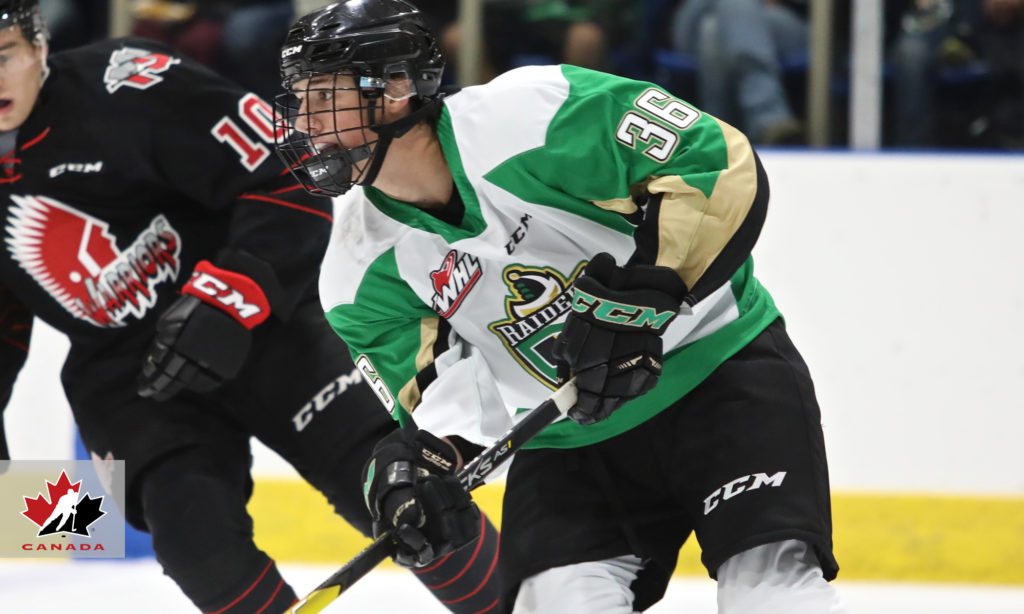 The camp featuring 113 players is set for July 19 to 25 to introduce players to Hockey Canada in preparation for the 2020 World Under-17 Hockey Challenge. The roster of players will be split into six teams for the week-long virtual camp and will participate in a variety of sessions with a focus on player development through online education.

Crocker was picked 22nd overall in the 2019 WHL Bantam Draft. Hailing from Delta, BC, he signed with the Raiders on May 16, 2019. In seven games with Delta Hockey Academy Prep, he had a pair of assists.

He also suited up in three WHL Preseason games, registering an assist. During the 2019 WHL Cup, Crocker had a pair of goals en route to a bronze medal victory over Alberta.

Related Links
Hockey Canada Release Full Camp Roster
“The National Under-17 Development Camp is the first stage in introducing these athletes to the Program of Excellence, and it is a great opportunity for them to develop as players and learn what it takes to wear the Maple Leaf,” said Scott Salmond, Senior Vice-President of National Teams with Hockey Canada.

The 2020 World Under-17 Hockey Challenge, presented by TELUS, takes place in Charlottetown and Summerside, PEI in November.

The Raiders are also hosting a clearance sale at the Prince Albert Source For Sports Team Store in the Art Hauser Centre and online. Use the promo code CLEARANCE2020 to receive 20% off your order online or in store. Some restrictions apply. Click here to shop.

Season tickets for the 2020-21 campaign are now available as the Raiders will celebrate their 50th season of play. Ticket information is available here. The WHL is targeting a return date of October 2. For more information on the WHL’s Return to Play Protocol, click here.

NEWS | 113 of Canada’s next-gen athletes will focus on foundation, growth and connection at the virtual national under-17 development camp from July 19-25.