highlight of the year 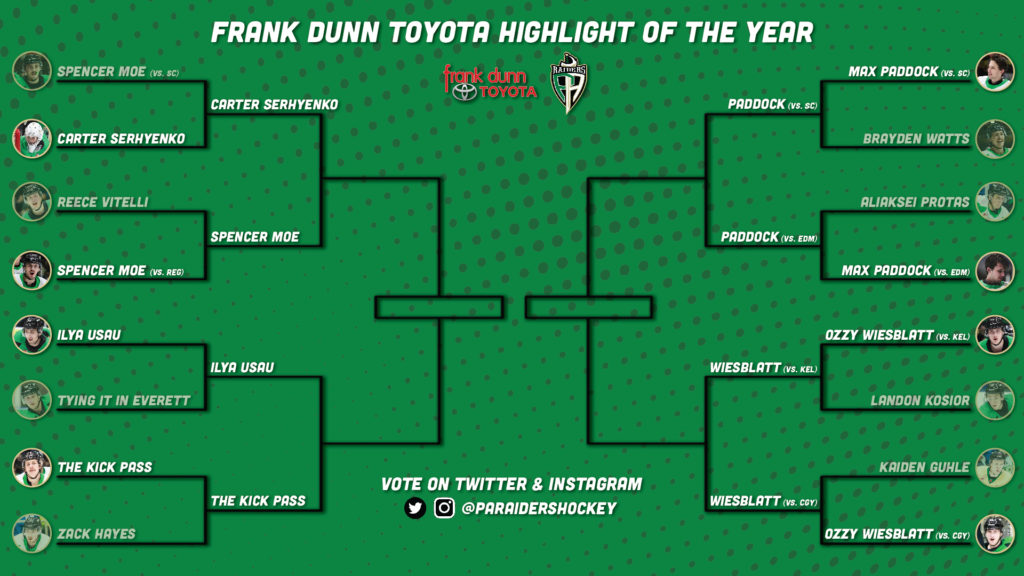 The quarter-finals of the Frank Dunn Toyota Highlight of the Year Tournament have been set after two weeks of voting. Here’s the schedule of voting to see who advances to the semifinals.

Related Links
Frank Dunn Toyota Highlight of the Year Page Prince Albert Raiders on Twitter Prince Albert Raiders on Instagram
Here’s how it got to this point. Carter Serhyenko opened up the tournament with a narrow victory over Spencer Moe’s goal against the Swift Current Broncos that reached the semifinal of this year’s CHL Showdown Playoffs, earning the victory with 51.3% of the vote.

Spencer Moe secured a rematch with Carter Serhyenko when his give-and-go goal against the Regina Pats got past Reece Vitelli’s shorthanded goal in Winnipeg with 78.6% of the vote.

The second quarter-final matchup is an all-Max Paddock affair. His first play – a sensational blocker save – got past Brayden Watts’ quick dangle in front in Edmonton in the first round with 50.8% of the vote. It was the closest matchup of the opening round.

Paddock’s second play – in which he pulled the puck off the line against the Edmonton Oil Kings – upended Aliaksei Protas’ shorthanded goal in Lethbridge with 61.8% in the poll.

The third quarter-final has Ilya Usau’s dangle through the defence in Red Deer taking on Aliaksei Protas’ kick pass to Brayden Watts against Edmonton. Usau knocked off another duo in the first round, picking up 58.4% of the vote against Aliaksei Protas and Ozzy Wiesblatt’s game-tying goal in Everett.

“The Kick Pass” earned its spot in the quarter-finals by taking 51.5% of the votes cast against Zack Hayes’ big hit on Jake Neighbours of the Edmonton Oil Kings.

The final quarter-final matchup is another featuring two plays from the same player – Ozzy Wiesblatt. His first highlight – faking out Kelowna’s goalie on the power play – downed Landon Kosior’s first WHL goal with 68.8% of the votes cast.

Wiesblatt’s second entry in the tournament – his overtime winner against the Hitmen – advanced with 51.9% of the vote against fellow 2020 NHL Draft eligible player Kaiden Guhle’s deke at the blueline against the Medicine Hat Tigers.

The quarter-finals begin on Monday. Voting will continue on the Raiders’ Twitter feed. Due to popular demand, voting has been extended to Instagram for the rest of the tournament. Check out the Raiders’ Instagram story for the daily poll.