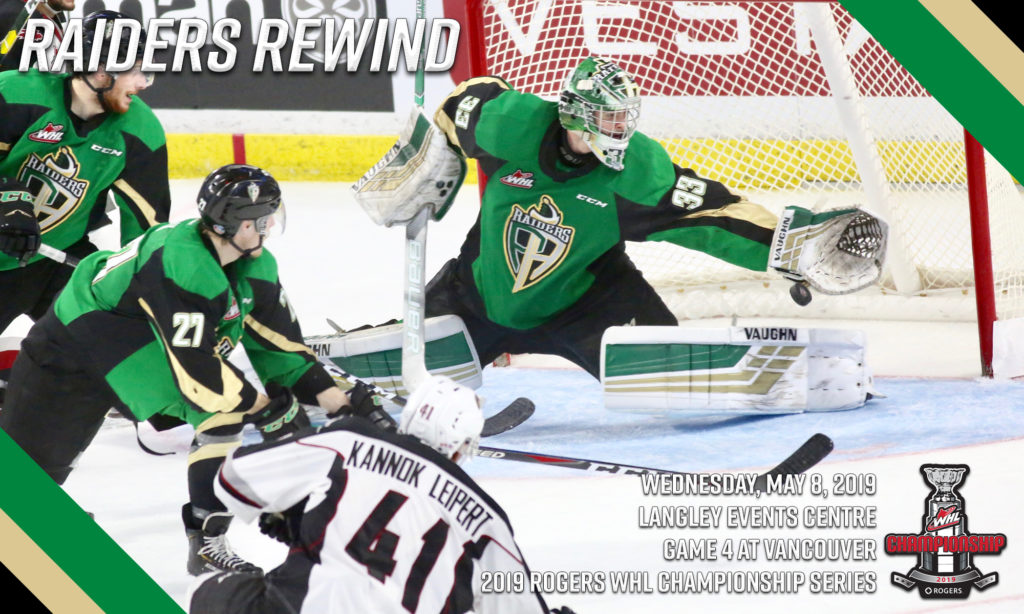 The Raiders took a 2-1 lead in the 2019 Rogers WHL Championship Series with an 8-2 win in Game 3 at the Langley Events Centre.

Parker Kelly scored 41 seconds into the game to set the tone. Ozzy Wiesblatt added another at the 2:27 mark to put the Raiders up 2-0 and chase David Tendeck from the Giants’ goal.

The goalie change didn’t halt the momentum. Brett Leason tallied twice and Cole Fonstad scored another to give the Raiders a 5-0 lead at the media timeout of the first period.

After the break, Kelly scored his second of the period with 3:30 to go in the first 20 minutes. Then with 16 seconds to play in the opening frame, Jeremy Masella hit Noah Gregor with a stretch pass and the future NHLer with the San Jose Sharks struck to make it a 7-0 lead for the Raiders after the first.

Dante Hannoun added another goal with 3:49 to play in the second to give the Raiders an 8-0 advantage.

Late in the second, Brayden Watts – a Giant at the time – broke Ian Scott’s shutout bid with a power-play goal with 52 seconds left in the frame. Yannik Valenti also scored on the power-play with 5:16 to play in the third to round out the scoring.

Scott picked up his second consecutive win and 14th of the WHL Playoffs by making 27 saves.

Point Leaders (As of May 8)