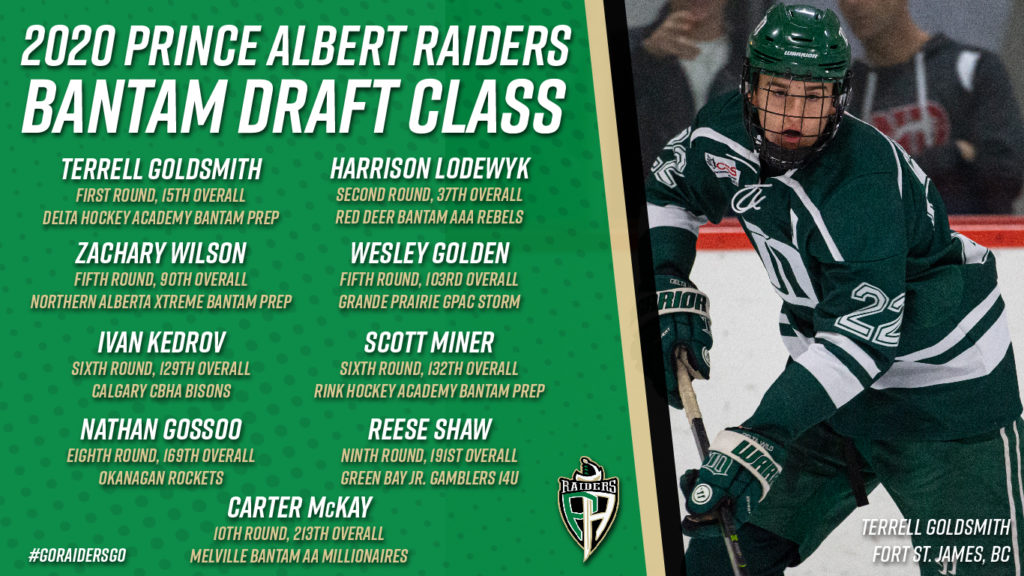 Prince Albert, SK – The Prince Albert Raiders welcomed the next crop of players at the 2020 WHL Bantam Draft on Wednesday.

The Raiders drafted nine players to the organization in the annual event. This year’s draft was conducted entirely online.

“It was a very successful draft,” said Raiders Director of Player Personnel Curt Brownlee. “We did a good job of rounding out the positions. I think we took players that are going to be proud to play in Prince Albert and all of the players we drafted have the characteristics of good Raiders.” 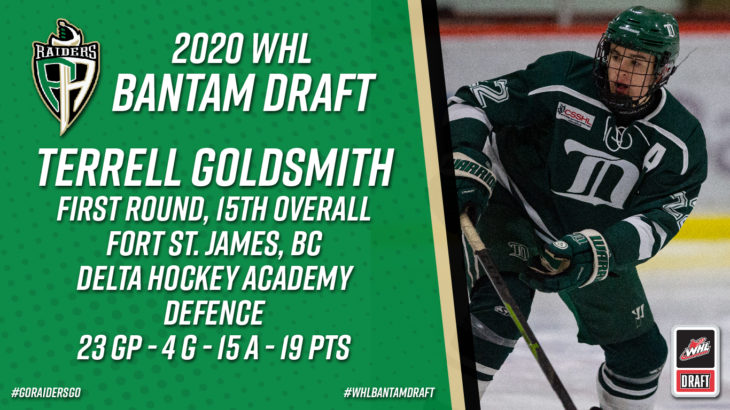 With the 15th overall selection in the 2020 WHL Bantam Draft, the Raiders started the day by drafting defenceman Terrell Goldsmith from Fort St. James, BC. The 6’3, 199-lb left-shooting blueliner played in 23 games for Delta Hockey Academy Bantam Prep in the CSSBHL, scoring four goals and adding 15 assists.

“You’re getting a hard-nosed, physical defenceman with excellent leadership qualities,” Brownlee said. “He comes with a high-compete level and a tenacious work ethic.” 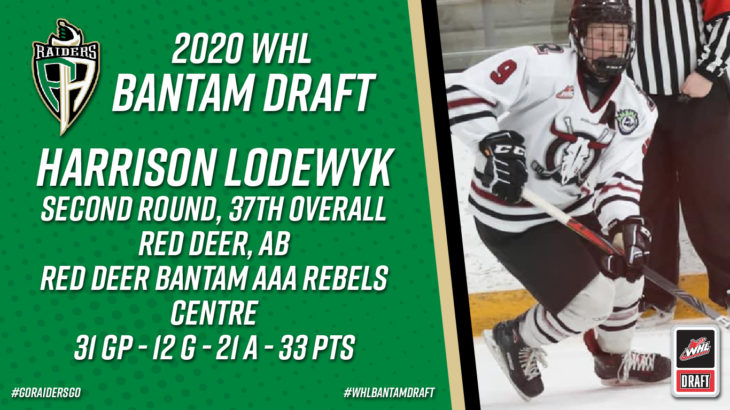 In the second round, the Raiders added centreman Harrison Lodewyk from Red Deer, AB. Playing for his hometown Bantam AAA Rebels, the 5’8, 159-lb forward netted 12 goals with 21 assists in 31 contests.

“Harrison is one of the best skaters in the draft,” noted Brownlee. “He plays the game at top speed. He’s an excellent 200-ft player that is responsible in the defensive zone. He’s a great team guy and he’s extremely excited to be a Raider.” 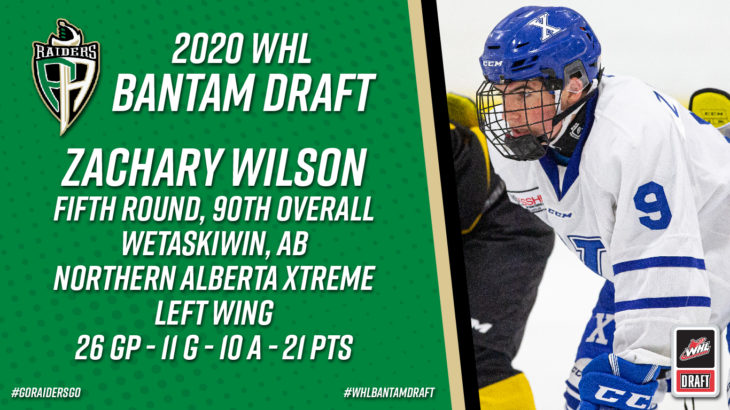 The Raiders’ next two picks came in the fifth round. Up first was Zachary Wilson at 90th overall, a left winger from Wetaskiwin, AB. Wilson, listed at 5’8 and 145 lbs, scored 11 goals and assisted on 10 more in 26 games for Northern Alberta Xtreme Bantam Prep of the CSSBHL.

“Zachary comes with tremendous compete,” Brownlee said. “He also has excellent character and was very consistent all year. You get the same guy from shift to shift and he came with high praise from his coach.” 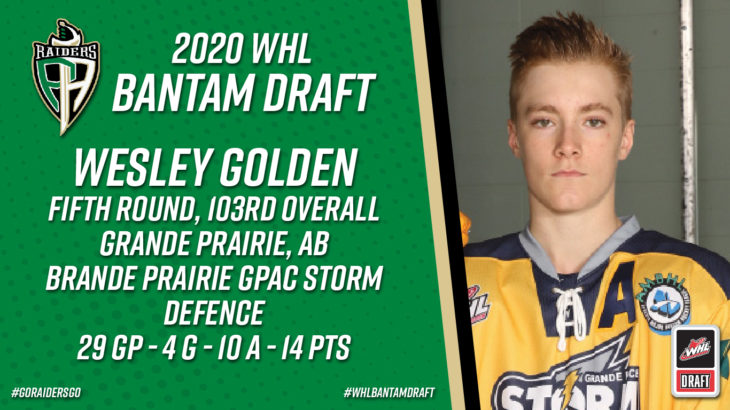 For their second pick of the round, the Raiders selected defenceman Wesley Golden from Grande Prairie, AB 103rd overall. In 29 games for the Grande Prairie GPAC Storm, the 6’3, 169-lb right-shooting rearguard had four goals and 10 assists.

“Wesley is very good-sized right-handed defenceman that moves well for his size,” explained Brownlee. “He thinks the game well and puts pucks to the right spots consistently.” 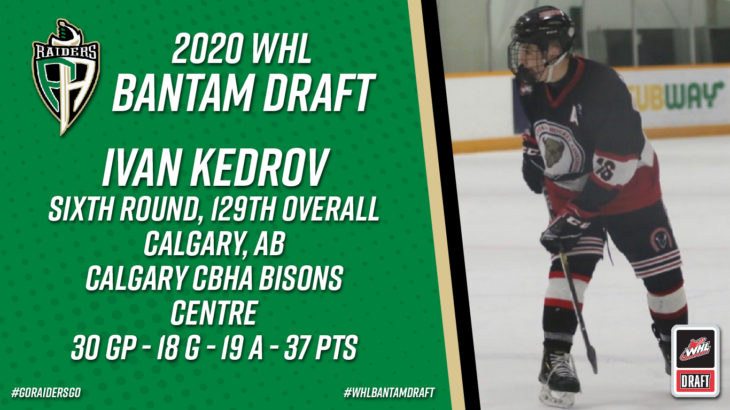 With their first pick in the sixth round, the Raiders chose centre Ivan Kedrov out of Calgary, AB 129th overall. Playing for the Calgary Bisons of the AMBHL, the 6’0, 180-lb forward scored 18 goals and picked up 19 assists in 30 games played.

“Ivan is big body that skates well,” Brownlee said. “He’s very effective with his size and strength. He has an excellent ceiling with a physical component and can generate offence.” 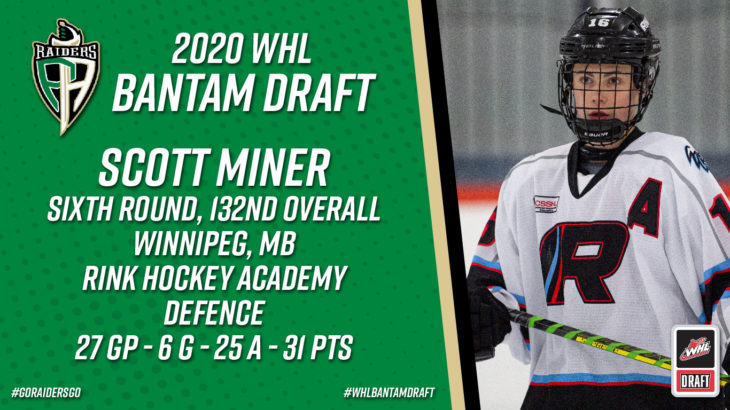 “Scott is a smooth-skating skilled defenceman that moves pucks effectively and has an overall very good hockey sense,” said Brownlee. “He has great pedigree with relatives that have played in the NHL, such as his uncle John who was drafted by the Edmonton Oilers.” 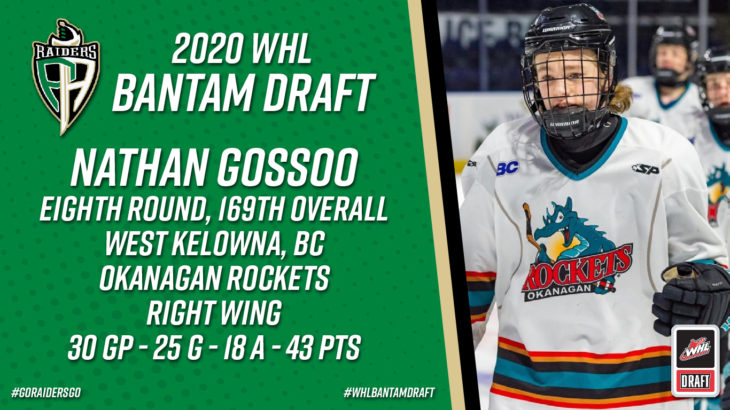 The Raiders’ next pick came in the eighth round when they selected right winger Nathan Gossoo from West Kelowna, BC at 169th overall. In 30 games with the Okanagan Rockets, the 5’10, 156-lb forward totalled 25 goals and 18 assists.

“Nathan’s a well-rounded right winger with high compete,” Brownlee explained. “He’s effective in the dirty areas and in his battles. He comes with a physical element and also chips in with scoring.” 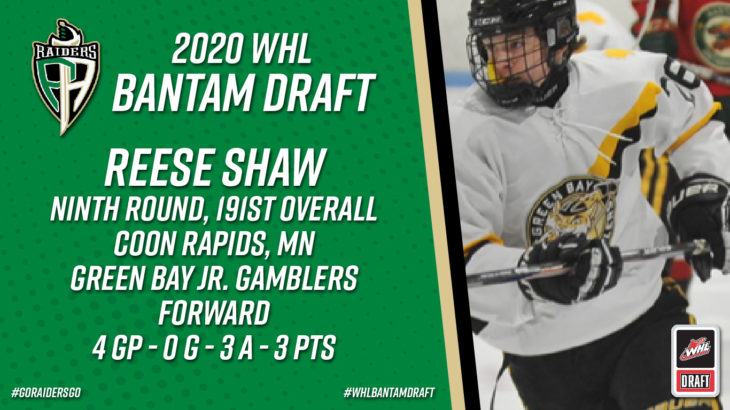 In the ninth round, the Raiders went south of the border to select forward Reese Shaw from Coon Rapids, MN with the 191st pick. Limited to four games, he had three assists for the Green Bay Jr. Gamblers 14U.

“Reese is a good-skating winger that has a physical presence on the ice,” said Brownlee. “He has good puck skills and vision. He can find the open man and create plays off the rush.” 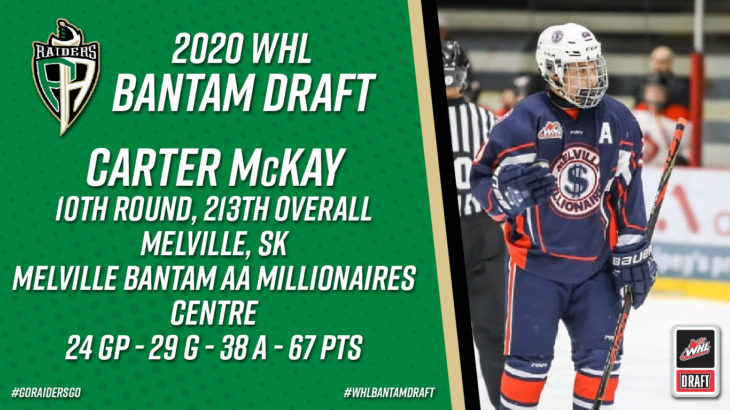 With their final pick of the draft, the Raiders chose centre Carter McKay from Melville, SK 213th overall. In 24 games with the Melville Bantam AA Millionaires, the 5’9, 160-lb forward scored 29 goals and had a team-leading 38 assists and 67 points. He also picked up an assist while playing in six games with the SMHL’s Yorkton Maulers.

“Carter is a highly-skilled forward that plays a tenacious, in-your-face game,” Brownlee noted. He has great puck skills and is a point producer.”