Raiders Shut Out In Winnipeg 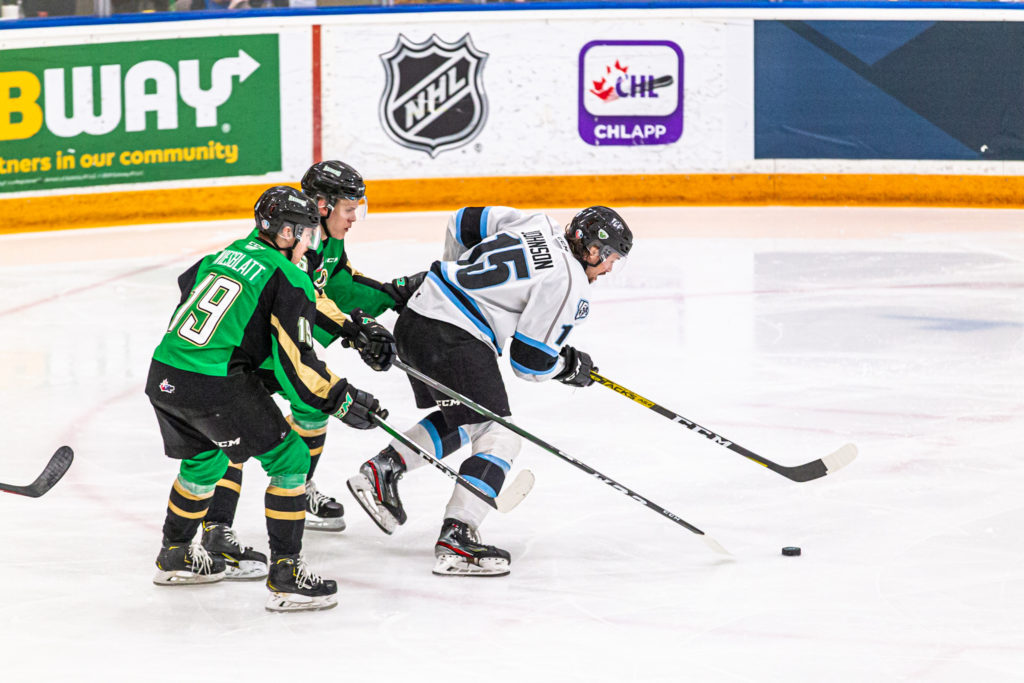 Peyton Krebs had a goal and an assists, while Isaac Johnson scored the other two Winnipeg goals.

The loss wrapped up the Raiders’ three-in-three weekend, picking up three of six points in the process. The Raiders are still six points up on the Brandon Wheat Kings for top spot in the East Division.

The teams battled to a scoreless first period. The Raiders’ best chance of the frame came on a power play with Protas stationed at the side of the net. He got the puck and pivoted at the top of the crease, but was unable to jam it past Hughes.

The Raiders had another pair of power play opportunities in the second period, but weren’t able to solve Hughes. Ozzy Wiesblatt had a shot that got through Hughes and trickle towards the goal line on one of the power plays, but one of the Winnipeg defenders was able to sweep the puck out of the blue paint before Ilya Usau was able to jam it in.

In the third, Protas had a chance at the side of the goal to jam in the puck. Kaiden Guhle was able to sneak into the slot and put a shot on Hughes, but the ICE goaltender made the save. Protas collected the rebound behind the goal line at the side of the net and tried to jam it in, but wasn’t able to get it around the post.

The Raiders ran into penalty trouble in the period. Already on the penalty kill, Guhle had a clearing attempt roll on his stick and it was sent out of play. On the ensuing five-on-three for the ICE, Krebs skated around the zone. His passing lanes were taken away, but he put a shot on goal from the top of the slot that got through traffic and past Carter Serhyenko to make it 1-0 at the 6:48 mark of the third.

The ICE capitalized on another power play with 7:44 to play. Johnson carried the puck into the zone. He cut his way from the left wing to the right, then fired a shot from the bottom of the right faceoff circle past Serhyenko to give Winnipeg a 2-0 lead.

A late power play in the third gave the Raiders another chance to get on the board, but Hughes was able to keep the shots out of his goal. Johnson sealed the game with an empty-net marker with 5.5 seconds to play, wrapping up the scoring at 3-0.

Serhyenko finished the game with 25 saves in the loss for the Raiders.

The Raiders are off until Friday night when they host the Moose Jaw Warriors at the Art Hauser Centre. The game is presented by Mann Northway in support of Cystic Fibrosis Canada. Puck drop is 7 p.m. Tickets are available at the Raiders Office and online here.