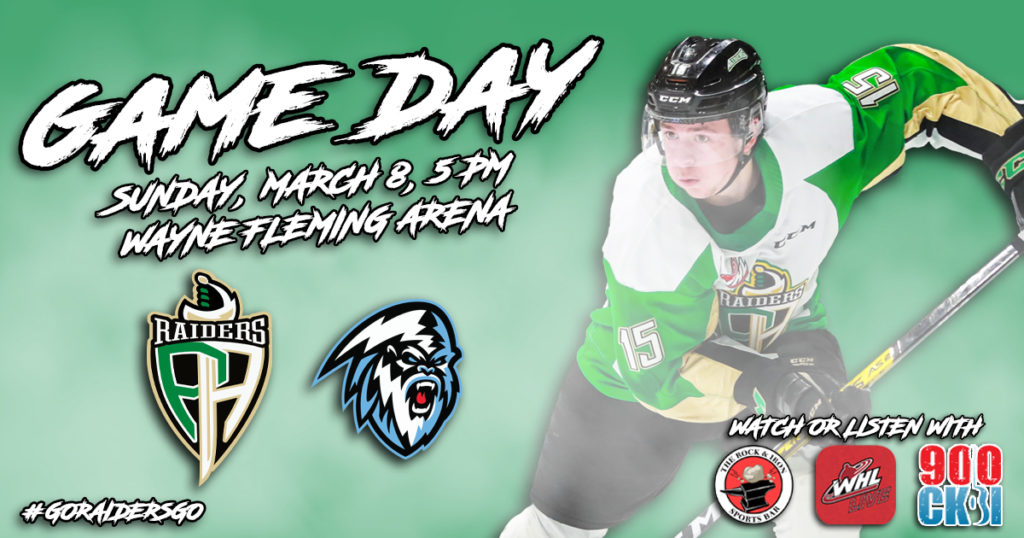 RAIDER REVIEW: The Raiders (36-17-6-4) close out their three-in-three weekend this evening at Wayne Fleming Arena against the Winnipeg ICE (36-24-1-0). Last night in Brandon, the Raiders doubled up the Wheat Kings 4-2 at Westoba Place. Brayden Watts led the way with two goals and an assist for the Raiders. Aliaksei Protas and Ozzy Wiesblatt each chipped in a goal and an assist.

STAYING HOT: Brayden Watts picked up his third consecutive two-goal effort on Saturday night in Brandon against the Wheat Kings. The overage forward now has 29 goals this season, which is equal to his total from the previous two seasons combined. Along with 32 assists, Watts has 61 points in 60 games with the Raiders this season.

30 DIMES: Ilya Usau picked up the 30th assist of his rookie season on Ozzy Wiesblatt’s goal on Saturday night against the Wheat Kings. He is the first rookie since Simon Stransky during the 2014-15 season to record 30 assists in a season. Usau is tied for fourth in rookie scoring in the WHL with 22 goals and 52 points this season.

WINNER WINNER: Ozzy Wiesblatt notched his fifth game-winning goal of the season on Saturday night. The 2020 NHL Draft prospect now has nine game winners in his WHL career, which is tied for second among active Raiders with Aliaksei Protas.

25 AND UP: Ozzy Wiesblatt’s goal gave him 25 on the season, making him the third Raider to reach that mark this season. This is the third consecutive season that the Raiders have featured at least three 25-goal scorers on the roster.

DIESEL POWERED: Jeremy Masella snapped a streak of 32 games without an assist against Brandon on Saturday. His last helper came on Dec. 11 against the Medicine Hat Tigers. This season, the Phoenix, AZ product is one point away from tying his career high of 14 set in each of the past two seasons.

NEXT UP: The Raiders return to the Art Hauser Centre to open a home-and-home series with the Moose Jaw Warriors on Friday night. Tickets are available at the Raiders Office and online here.