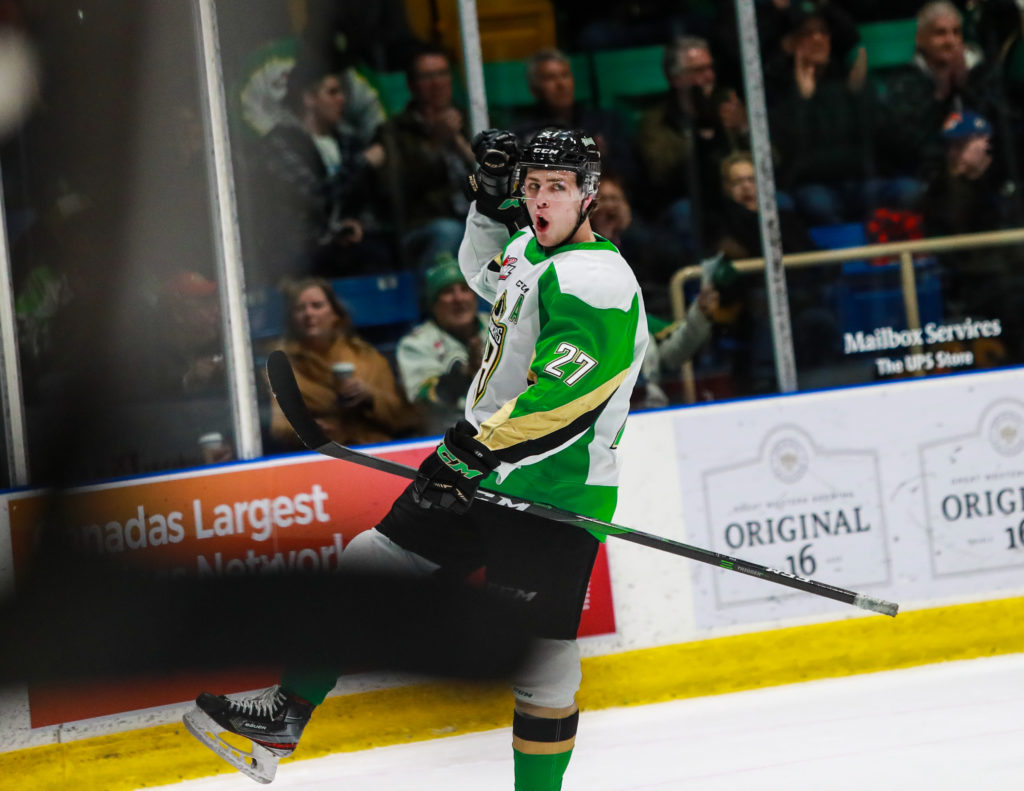 It was the third consecutive game that Watts scored multiple goals in a game. Aliaksei Protas and Ozzy Wiesblatt each chipped in a goal and an assist in the win.

The Raiders now hold a six-point advantage on the Wheat Kings for top spot in the East Division. Both teams have five games remaining in the season. The win also gave the Raiders a 4-1-1-0 record as the season series between the clubs came to an end on Saturday.

Each team had power-play chances in the opening 20 minutes, but the Wheat Kings struck first on a five-on-three opportunity late in the period. Luka Burzan shot a puck into Max Paddock’s pads that was kicked away, but the rebound found the stick of Ben McCartney who found the back of the net with 4:04 left in the period.

Shortly after, the Raiders responded on a partial odd-man rush. Watts hit Protas with a pass in the centre of the zone. Protas tried to hit Spencer Moe on the left wing, but the pass went off the skate of Wheat Kings defender Jonny Lambos and past Jiri Patera to tie the game with 2:25 to go in the opening frame. The goal was the Washington Capitals prospect’s 31st of the season.

SCORES! The Viper strikes! @protas_21 has his pass go off a Wheat King and past Patera!

In the final minute of the period, the Wheat Kings were given a penalty. That gave the Raiders a chance on the power play that carried over to the second period. Wiesblatt found Watts at the right faceoff dot. He turned and wired a shot that beat Patera to give the Raiders a 2-1 lead with his 28th goal of the year 48 seconds into the middle frame.

SCORES! @brayden_watts29 with an absolute laser on the power play!

Both teams’ goalies made a big save in the first half of the middle frame. Paddock was able to slide to his right to rob Burzan on a one-timer attempt. At the other end, Kaiden Guhle came in off the bench and got a pass. He was given space to skate in on Patera, but the Wheat Kings netminder denied Guhle’s attempt on goal.

The Wheat Kings tied it up seconds after a Raiders’ penalty expired. Burzan started a passing play that found Marcus Kallionkieli on the left wing. He went across the zone to Reid Perepeluk who tapped in the backdoor feed to make it 2-2 with 6:36 to play in the second.

Wiesblatt quickly responded for the Raiders. Ilya Usau got held up entering the offensive zone by Dom Schmiemann, but Usau was able to get the puck over to Wiesblatt who entered with speed. The 2020 NHL Draft prospect had a breakaway, faked to his backhand, then slid it through Patera’s five-hole for his 25th goal of the year to put the Raiders up 3-2 just 32 seconds after the Wheat Kings tied it.

SCORES! @ozzywiesblatt answers right back as he goes five-hole on Patera!

The Raiders found themselves down two men again late in the second period. This time, the Raiders were able to kill of both penalties to take a 3-2 lead into the final frame.

In the third, the Raiders were able to put the game away with 3:25 to play. Jeremy Masella found Protas at the left faceoff circle. He spun and passed it across the zone to Watts who struck for the second time on the night for his 29th goal of the year, giving the Raiders the 4-2 lead.

SCORES! @brayden_watts29 gets his second of the night, this time burying a feed from Aliaksei Protas!

That held up as the final as the Raiders were able to keep the Wheat Kings at bay for the final three minutes of the contest.

That’s game! Raiders take this one 4-2 over the Wheat Kings in Brandon.

We’re back at it tomorrow evening to take on the Winnipeg ICE. Game time is 5 p.m. CST.#GoRaidersGo #BDNvsPA pic.twitter.com/1uSRrOusa4

Paddock picked up the win in his hometown with a 28-save effort. Patera made 18 saves in the loss for the Wheat Kings.

The Raiders’ weekend ends on Sunday evening in Winnipeg against the ICE at Wayne Fleming Arena. Puck drop is 5 p.m. CST. Head to The Rock And Iron Sports Bar to watch the game, or listen on 900 CKBI with Trevor Redden.

The next Raiders’ home game is on Friday, March 13 when the Moose Jaw Warriors come to down. The game is presented by Mann Northway in support of Cystic Fibrosis Canada. Puck drop is 7 p.m. Tickets are available at the Raiders Office and at raiderhockey.com.