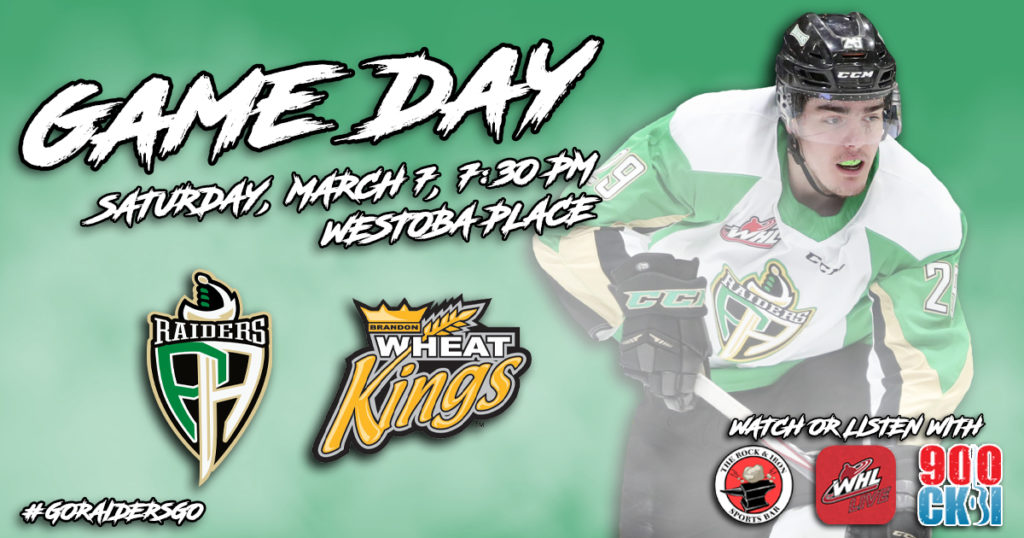 RAIDER REVIEW: The Raiders (35-17-6-4) head to Brandon tonight to battle the Wheat Kings (35-21-4-2) at Westoba Place. Last night in Prince Albert, the Raiders fell 3-2 in overtime to the Wheaties. Brayden Watts scored both of the Raiders’ goals, while Aliaksei Protas had the primary assist on both markers. Ridly Greig picked up two goals—including the overtime winner—for Brandon.

BACK TO BACK: Brayden Watts scored two goals in a game for the fifth time this season on Friday night. It was also the first time in his WHL career that the overager from Bakersfield, CA has scored multiple goals in consecutive games, netting a pair in Tuesday night’s win over the Hitmen as well. Watts continues the best offensive season in his WHL career with 27 goals and 31 assists in 59 games.

HEATING UP: Spencer Moe added an assist to his season total on Friday night against the Wheat Kings, extending his point streak to four games. It is the Calgary product’s third-longest streak of the season. Over the past four games, Moe has a goal and four assists to extend his career-best numbers to 19 goals and 32 assists while playing in all 62 contests. Moe needs just one more assist to have as many helpers as his point total of 33 last season.

PROTAS’ POINTS: With his two assists on Friday night, Aliaksei Protas recorded his 16th multi-assist game of the season. All 16 of those occasions were two-assist nights.  It was also the Washington Capitals prospect’s 25th multi-point night this year.

STREAK SNAPPED: Ozzy Wiesblatt saw his nine-game scoring streak come to an end on Friday night against the Wheat Kings. Over his career-best stretch, the 2020 NHL Draft prospect had four goals 10 assists. Wiesblatt is second on the team in scoring with 24 goals and 44 assists this season.

NEXT UP: The Raiders finish off their three-in-three weekend in Winnipeg against the ICE on Sunday evening. Puck drop is 5 p.m. CST. The next Raiders’ home game is on Friday, March 13 when the Moose Jaw Warriors come to town. Tickets are available online here.