Raiders Pick Up Point in Overtime Loss to Wheat Kings 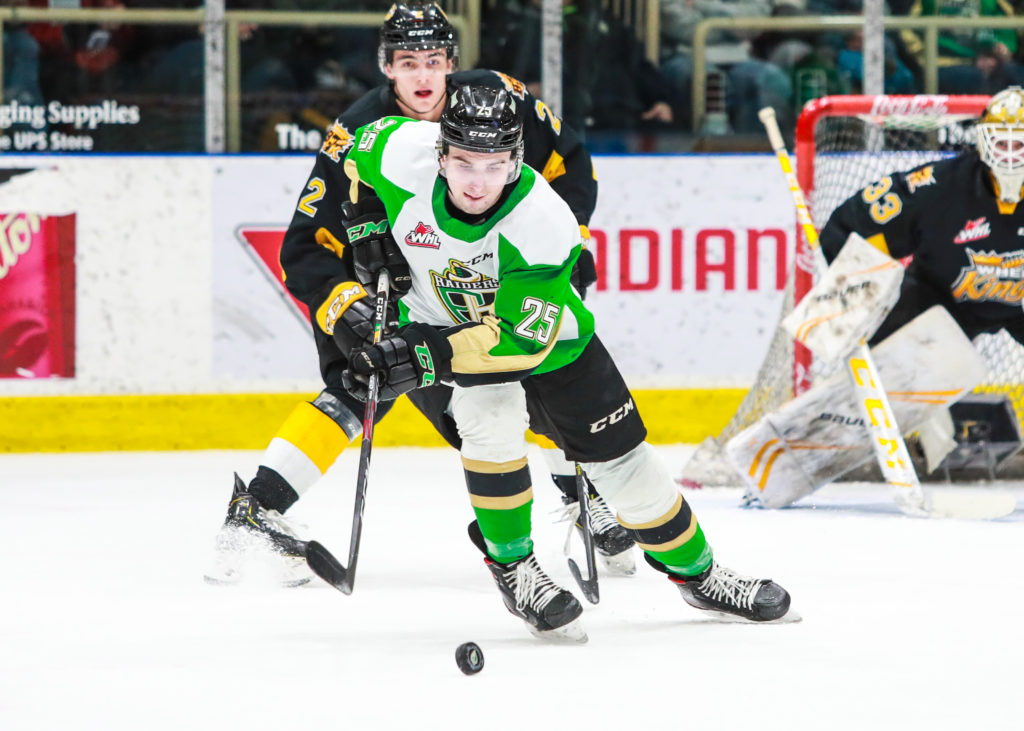 The loss snapped the Raiders’ eight-game home winning streak, though they extended their streak of picking up at least a point at home to 14 consecutive contests.

Brayden Watts scored both of the Raiders’ goals on the evening. Aliaksei Protas picked up the primary assist on both Raiders’ goals. Ridly Greig had a pair of goals, including the overtime winner, for the Wheat Kings.

The Raiders got the scoring started with 5:49 left in the opening frame. Protas freed the puck from behind the net with a big hit on a Brandon defender. He got the puck out to Brayden Watts in the slot and overager from Bakersfield, CA picked the corner over Jiri Patera’s glove for his 26th of the season, putting the Raiders up 1-0.

With 3:32 to go in the first, the Wheat Kings tied it up. Jake Chiasson had the puck knocked away briefly but he was able to recover and snap a shot past Max Paddock to make it a 1-1 game after 20 minutes.

The Wheaties took the lead 4:13 into the middle frame. Ridly Greig took a pass in front of the goal with Paddock sliding to his left. Greig was able to cut back across the goal mouth and slip the puck into the net to give Brandon a 2-1 advantage.

Late in the second, the Raiders tied it up again. Spencer Moe trapped the puck along the boards in the offensive zone until he was able to find Protas. The Washington Capitals prospect carried it towards goal then hit Watts with a pass across the face of the net. Watts one-timed it past Patera for his second of the game and 27th of the year to send the game to the second intermission tied at 2-2.

In the third, the Raiders had a great chance to take the lead on a power play. Kaiden Guhle’s drive from the point was denied by Patera. The rebound found the stick of Ozzy Wiesblatt, but Patera was able to slide over and deny the Calgary product from extending his point streak to nine games.

The score held at 2-2, sending the game to overtime. Moe’s shot was blocked springing Greig on a breakaway. Greig snapped it past Paddock for his second of the night to end the game 29 seconds into the extra frame.

Paddock made 32 saves to help his team pick up the point in the overtime loss. Patera stopped 25 shots to pick up the win.

The Raiders will get another crack at the Wheat Kings on Saturday night in Brandon at Westoba Place. Game time is 7:30 p.m. Catch the game at The Rock And Iron Sports Bar, or listen to Trevor Redden on 900 CKBI.

The next Raiders’ home game is on Friday, March 13 when the Moose Jaw Warriors come to down. The game is presented by Mann Northway in support of Cystic Fibrosis Canada. Puck drop is 7 p.m. Tickets are available at the Raiders Office and online here.