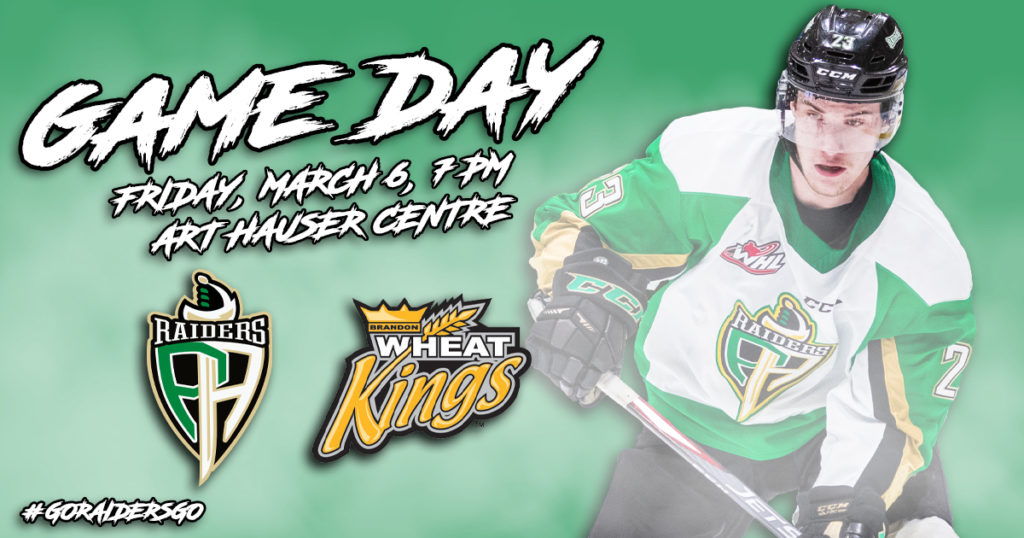 RAIDER REVIEW: The Raiders (35-17-5-4) start a three-in-three weekend tonight as the Brandon Wheat Kings (34-21-4-2) make the trip to Prince Albert. On Tuesday night, the Raiders downed the Calgary Hitmen 8-3 at the Art Hauser Centre. Spencer Moe, Aliaksei Protas, Ilya Usau, and Brayden Watts all had three-point nights on Tuesday. Max Paddock picked up the win between the pipes with 24 saves.

EIGHT IS ENOUGH: For the second time this season, the Raiders struck eight times in a game. The previous time came on Oct. 12 at home in an 8-4 win against the Moose Jaw Warriors.

STRIKING FOR FOUR: The Raiders scored four goals in a single period for the fifth time this season, matching a season high for the most goals scored in the first period. The Raiders’ highest scoring period is five goals, which was in the third period of a 6-3 win over the Regina Pats on Nov. 1.

DOUBLING UP: Reece Vitelli picked up a pair of goals in Tuesday’s win over the Calgary Hitmen. It was the second time since joining the Raiders that the Winnipeg, MB product recorded two goals in a game. He previously struck twice in a game on Jan. 5 in his hometown against the ICE.

CAREER NUMBERS: Captain Zack Hayes scored the seventh goal of the season on Tuesday night against the Hitmen. The Calgary, AB product is one goal away from matching his career output of eight prior to the season. Hayes is four points away from tying his career-best point total of 27 set last year.

NEXT UP: The Raiders travel to Manitoba to take on the Brandon Wheat Kings on Saturday night before heading to Winnipeg to faceoff with the ICE on Sunday. The next Raiders’ home game is on Friday, March 13 against the Moose Jaw Warriors. Tickets are available at the Raiders Office and online here.