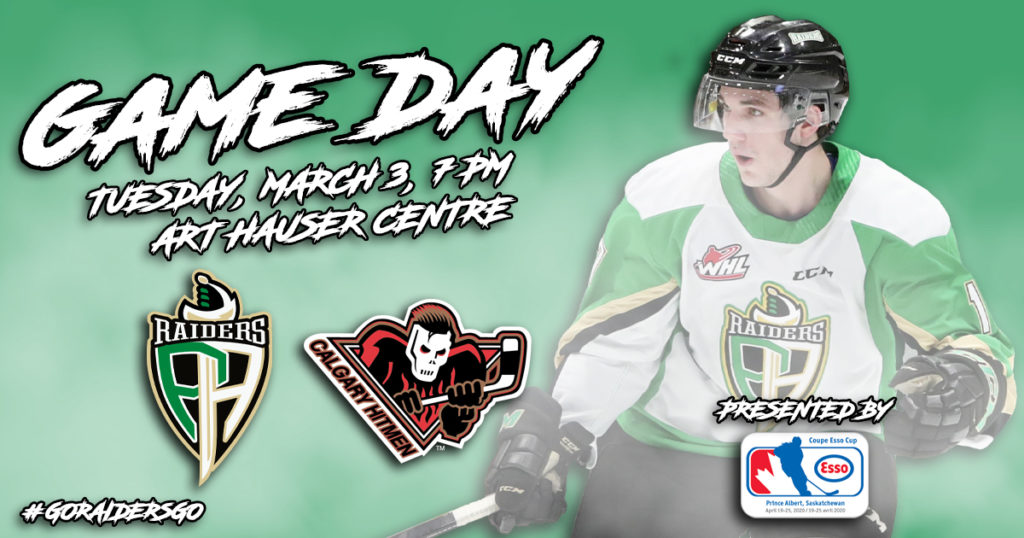 “THIS GIRL CAN” NIGHT INFORMATION | GAME PROGRAM | GET TICKETS

RAIDER REVIEW: The Raiders (34-17-5-4) wrap up the season series with the Calgary Hitmen (34-21-4-1) tonight at the Art Hauser Centre. On Sunday night, the Raiders knocked off the Warriors 3-2 at home. Ozzy Wiesblatt had a goal and an assist in the win. Kaiden Guhle and Aliaksei Protas also scored for the Raiders. Carter Serhyenko stopped 14 shots to pick up his seventh win of the year.

CENTRAL DIVISION FINALE: Tuesday night is the Raiders’ final game of the regular season against the Central Division. The Raiders have posted a 13-6-1-3 record against their Central opponents, including a season sweep of the Swift Current Broncos and three victories over the Edmonton Oil Kings and the Lethbridge Hurricanes. Heading into tonight’s game, the Raiders have outscored their Central foes 82-62.

STREAK WRAP UP: For the first time since Feb. 5 against Medicine Hat, Ilya Usau was held off the scoresheet as his career-best eight-game point streak came to an end. Over his streak, Usau had four goals and six assists to bring his total to 21 goals and 27 assists on the year. He is two points away from being the first Raiders rookie to net 50 points since Leon Draisaitl had 58 in 2012-13. The 2020 NHL Draft prospect is fifth in rookie scoring this season.

IN BUNCHES: When Kaiden Guhle’s scored on Sunday, it gave him goals in back-to-back games. The 2020 NHL Draft prospect has scored in consecutive games four times this season, including a four-game goal-scoring streak in November.

GAME WINNERS: Aliaksei Protas recorded his seventh game-winning goal of the season on Sunday against the Warriors. The Washington Capitals prospect is tied for sixth in the WHL for game-winning goals this season.

LONGEST STREAK: Ozzy Wiesblatt extended his career-long point streak to eight games with his two-point night on Sunday against the Warriors.

NEXT UP: The Raiders host to the Brandon Wheat Kings on Friday night to kick off a three-in-three weekend. Puck drop is 7 p.m. Tickets are available at the Raiders Office and online here.