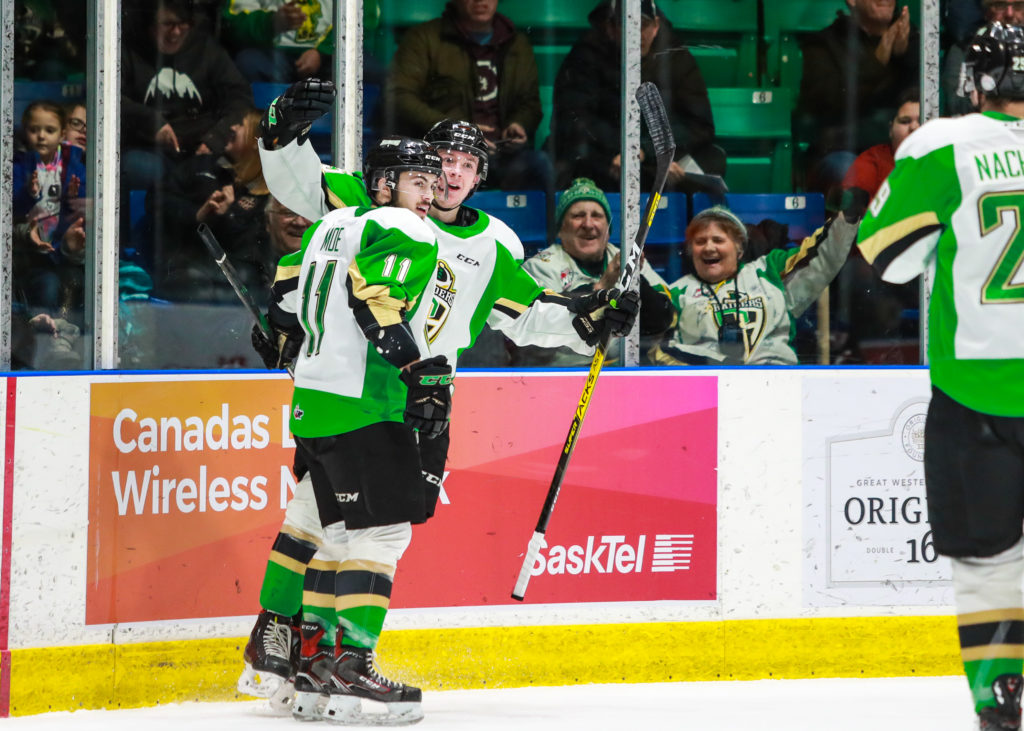 Brayden Watts, Spencer Moe, Aliaksei Protas and Ilya Usau all recorded three-point nights for the Raiders. Reece Vitelli also netted a pair of goals. Zack Hayes picked up the Raiders’ other goal on the night.

The eight goals scored on Tuesday night tied the highest offensive output by the Raiders this season. They previously scored eight goals on October 12 against the Moose Jaw Warriors.

The Raiders jumped out to a big lead in the first period sparked by Watt’s goal at the 9:01 mark of the frame. The overager from Bakersfield, CA circled to the top of the zone and threw a puck towards goal. The puck trickled through Jack McNaughton to give the Raiders a 1-0 lead with his 24th of the year.

About three minutes later, Hayes extended the Raiders’ lead. His blast from the point hit Jackson van de Leest in front of the goal and got past McNaughton for his seventh of the year, making it a 2-0 game.

Seconds after a Raiders power play expired, they tallied again to give them a 3-0 lead. Moe recovered the puck at the side of the goal and put a shot on goal. Vitelli was creating traffic in front and got his stick on the puck to deflect it past McNaughton for his seventh of the year.

The Raiders converted on one of their three first-period power plays near the end of the period. Usau’s shot was blocked in front of the net, but it found the stick of Watts. He put the puck towards goal and it went off the stick of Luke Prokop and in to put the Raiders up 4-0 after the first period with his 25th of the year.

The Hitmen responded in the second period with some pressure following an early power play. Carson Focht led Cael Zimmerman into space with a pass and the Zimmerman snapped a shot through Max Paddock to get the Hitmen on the board

Just 12 seconds later, Calgary cut the Raiders’ lead in half. Riley Stotts recovered a puck in the corner and centered a pass for Mark Kastelic. The Ottawa Senators prospect one-timed the pass past Paddock to make it a 4-2 game.

With 7:50 to go in the second, the Raiders got back on the board with another power-play marker. Usau had the puck at the top of the right faceoff circle and passed it to Protas in the slot who tipped it past McNaughton for his 30th of the year, putting the Raiders up 5-2.

Three minutes later, Vitelli tallied his second of the night to make it a 6-2 game. His shot from the goal line banked off McNaughton and in for his eighth goal of the season.

In the third, the Raiders added another goal at the 4:05 mark. With the man advantage, Protas made a backdoor pass that found Usau at the bottom of the left faceoff circle. Usau buried it into the empty side of the net for his 22nd goal of the year, putting the Raiders up 7-2.

Midway through the third, Moe forced a turnover to spring himself on a breakaway. He kept, deked, and put the puck under McNaughton as the goalie slid from right to left for his 19th goal of the year to give the Raiders an 8-2 advantage.

With 6:13 to go in the third, Hitmen got one back. Zimmerman pounced on a rebound in front and chipped it past a sprawled Paddock to net his second of the game.

The Raiders wrapped up the game for the final six minutes to pick up their eighth straight win on home ice.

Paddock finished the game with 24 saves for his 22nd win of the season. McNaughton stopped 36 shots in a losing effort for the Hitmen.

The Raiders return to the Art Hauser Centre to kick off a three-in-three weekend against the Brandon Wheat Kings on Friday night. Puck drop is 7 p.m. Tickets are available at the Raiders Office and online here.