Raiders Downed By Hurricanes In Lethbridge 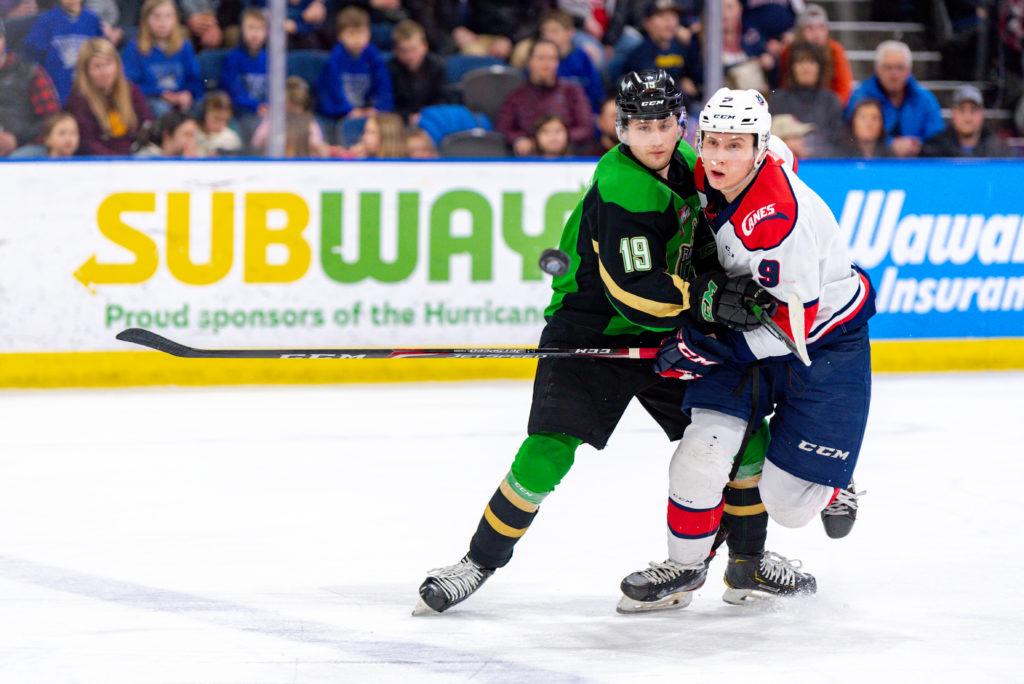 Lethbridge, AB – A mid-third period goal from Calen Addison held up as the winner as the Prince Albert Raiders (28-16-5-4) dropped a 3-1 game to the Lethbridge Hurricanes (32-12-2-5) at the ENMAX Centre on Saturday night.

The Raiders have now lost consecutive games in regulation for the first time since Jan. 3 and 4 against the Brandon Wheat Kings and the Winnipeg ICE, respectively.

Saturday’s game also marked the end of the season series between the Raiders and the Hurricanes. The Raiders finished the four-game set with three out of four wins.

Hayes opened the scoring 4:27 into the contest. Ilya Usau pressured the Hurricanes defence behind the goal and got the puck to Ozzy Wiesblatt, who hit Hayes with a pass at the top of the slot. The Raiders captain was able to skate into a shot and wired the puck past Carl Tetachuk to make it a 1-0 game with his sixth goal of the year.

SCORES! Hayeser with the laser! @hayesie24 opens the scoring 4:27 in!

The Raiders had two chances that almost made it 2-0. First, Eric Pearce sprung Daniil Stepanov on a short breakaway, but Tetatchuk turned aside his backhand attempt. Then Spencer Moe found himself on a breakaway when he got out of the penalty box. Moe deked, but was unable to solve Tetachuk.

Lethbridge tied the game on another power play in the opening period. A dump-in attempt went off a stick and directly on the Raiders’ goal. Max Paddock made the stop, but the rebound found the stick of Oliver Okuliar and the import forward scored his 29th of the year to make it a 1-1 game after 20 minutes.

The second period saw the Hurricanes take over the lead on the shot clock, putting 16 pucks on Paddock during the frame. The Raiders goaltender was up to the task in the middle frame and kept the Hurricanes at bay.

Lethbridge took the lead midway through the third period. Calen Addison got the puck at the wall by the blueline and was able to skate into the centre of the zone. He picked the corner on Paddock to give the Hurricanes a 2-1 lead with 9:30 to play in the third.

Late in the period, the Raiders had a chance on the power play to tie the game when Brett Davis put the puck over the glass for a delay of game penalty. Aliaksei Protas found Wiesblatt with a pass across the zone. The 2020 NHL Draft prospect had time in front, but Tetachuk was able to turn him away. Later on that man-advantage, Brayden Watts found himself alone in the slot, but his shot was gloved by Tetachuk.

With approximately two minutes to go Tetachuk made another big save for the Hurricanes. Watts found Michael Horon at the top of the crease from behind the net. Horon put the one timer on goal, but Tetachuk made the save.

Okuliar iced the game for the Hurricanes when he skated a puck into the empty net with 1:38 to play to wrap up the scoring at 3-1.

Paddock stopped 34 shots in the loss for the Raiders while being named the game’s third star. Tetachuk made 27 saves to pick up the win for the Hurricanes.

The Raiders will look to bounce back as they return to the Art Hauser Centre for two games next weekend, beginning on Friday night against the Swift Current Broncos. Saturday night sees the Brandon Wheat Kings come to town. Puck drop for both games is 7 p.m. Tickets are available at the Raiders Office and online here.