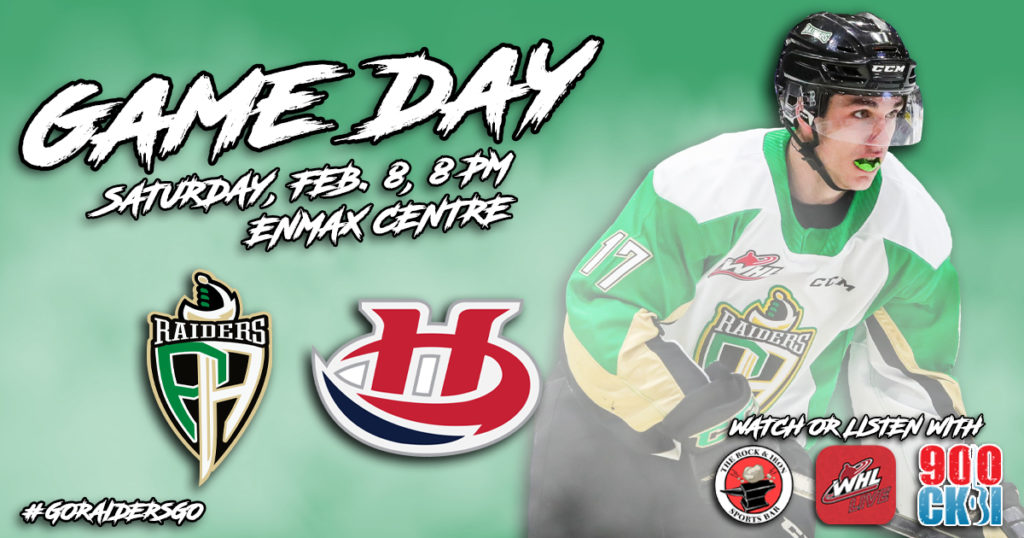 RAIDER REVIEW: The Raiders (28-15-5-4) wrap up their Alberta road trip tonight against the Hurricanes (31-12-2-5) in Lethbridge. Last night in Calgary, the Raiders were edged 2-1 by the Hitmen at the Scotiabank Saddledome. Brayden Watts scored the lone goal of the contest for the Raiders. Max Paddock stopped 24 shots. Brayden Peters was the star for Calgary, making 39 saves for the Hitmen.

SNAPPED: The Raiders had their four-game winning streak and 12-game stretch of not losing in regulation snapped on Friday night in Calgary. It was the Raiders’ first regulation loss since Jan. 4 in Winnipeg against the ICE.  Over the 12-game streak, the Raiders earned 20 of a possible 24 points to reclaim top spot in the East Division.

FOUR OR MORE: Brayden Watts’ goal in the second period of Friday night’s game extended the overage winger’s point streak to four games. It’s Watts’ fourth streak of four or more straight games with a point this season. He has two five-game point streaks to his name this season.

ROOKIE NUMBERS: Ilya Usau recorded his 22nd assist of his rookie season on Friday night. That has him tied for fifth in assists among rookies in the WHL. His 39 points on the season also has him alone in fifth place in the rookie scoring race.

ONE AWAY: Reece Vitelli is one assist shy of tying his career high after picking up a helper on Brayden Watts’ goal on Friday night. The Winnipeg, MB product has 15 assists on the year split between the Raiders and the Everett Silvertips.

NEXT UP: The Raiders return to the Art Hauser Centre for a pair of games next weekend. Friday night sees the Swift Current Broncos come to town. On Saturday, the Raiders host the Brandon Wheat Kings. Puck drop for both games is 7 p.m. Tickets are available online here.