Raiders Edged By Hitmen in Tight Contest in Calgary 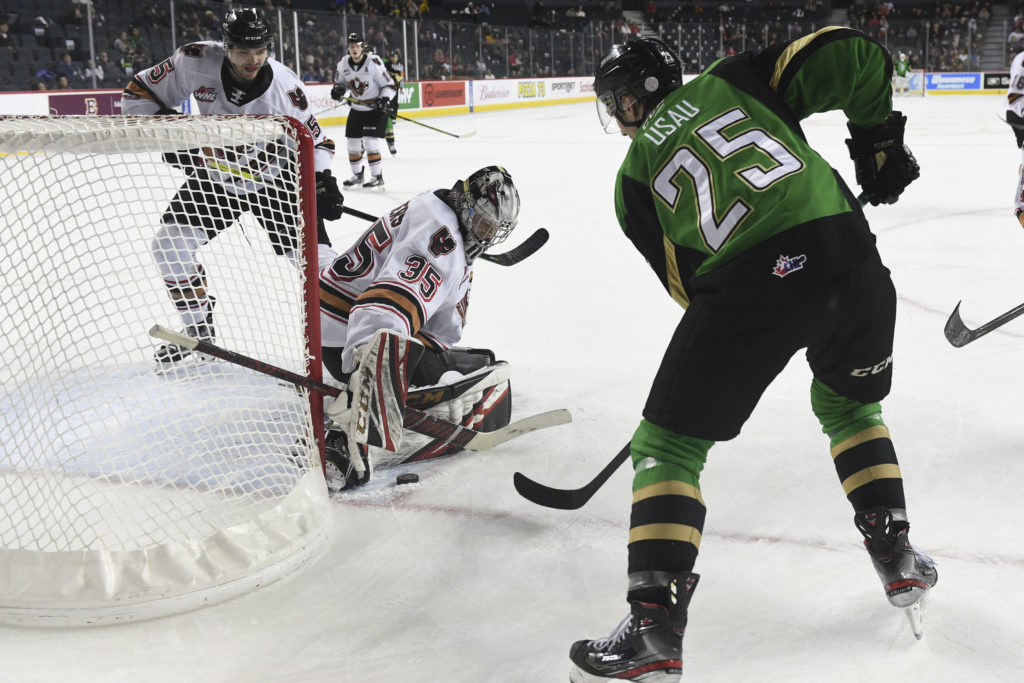 Calgary, AB – The Prince Albert Raiders (28-15-5-4) peppered Brayden Peters with shots as they pressed for an equalizer, but in the end were edged 2-1 by the Calgary Hitmen (28-16-4-1) on Friday night at the Scotiabank Saddledome.

The loss snapped the Raiders’ four-game winning streak and 12-game stretch without a loss in regulation.

Brayden Watts scored the lone goal for the Raiders midway through the second period in the loss. Both of Calgary’s goals came in the opening 20 minutes.

Calgary opened the scoring 4:07 into the contest. Riley Stotts recovered the puck at the side of the goal. He made a pass across the net to Josh Prokop, who was able to lift a shot over a sliding Max Paddock to make it 1-0.

The Raiders nearly tied it shortly after. Jeremy Masella put a shot towards goal that was deflected in front by Ilya Usau. The tipped puck got past Brayden Peters, but hit the post and stayed out.

With 5:12 to play in the first, the Hitmen doubled their lead. Sean Tschigerl skated down the right wing and put a shot on goal that Paddock stopped. The Raiders goaltender had the puck underneath him, but a Raiders defender bumped into him and dislodged the puck. Riley Fiddler-Schultz crashed the net and potted the rebound to give Calgary a 2-0 advantage after the first.

Midway through the second, Brayden Watts got the Raiders on the board. Ilya Usau won a faceoff to the left of Peters that was eventually scrummed. Watts was able to dig the puck out, dragged the puck to get a shooting lane and wired a shot past Peters for his 22nd goal of the year, making it 2-1 for Calgary.

SCORES! @brayden_watts29 strikes with a wrister from the faceoff circle!

At the other end, Paddock made some big saves to keep it a one-goal game. He stopped Kyle Olson who was left alone at the top of the crease. Paddock was also able to kick a Riley Stotts shot away off a rush.

In the final period, the Raiders continued to press for the equalizer and carried the play for most of the period. Prince Albert put 17 shots on goal in the final period, but were unable to tie the game. Evan Herman had a chance with Peters down, but his shot was blocked by the leg of a Hitmen defender.

With Paddock on the bench for the extra attacker in the final two minutes, the Hitmen took a delay of game penalty for putting the puck over the glass. On the man advantage, Zack Hayes fired a shot from the point that rang off the cross bar.

In the final seconds, Reece Vitelli got the puck at the left side of the right faceoff circle and fired a quick shot on goal that Peters was able to kick away to preserve the victory for the Hitmen.

After allowing two goals in the first period, Paddock shut the door for the rest of the game for the Raiders with 26 shots in the loss. It was his first loss in regulation since joining the Raiders at the WHL Trade Deadline. Peters finished the game with 39 shots for the Hitmen in the win.

The Raiders wrap up their Alberta road trip on Saturday night in Lethbridge against the Hurricanes at the ENMAX Centre. Game time is 8 p.m. Head to The Rock And Iron Sports Bar to watch the game, or listen on 900 CKBI with Trevor Redden.

The next Raiders’ home game is on Friday, February 14 when the Swift Current Broncos make their final trip of the season to the Art Hauser Centre. Puck drop is 7 p.m. Tickets are available at the Raiders Office and online here.