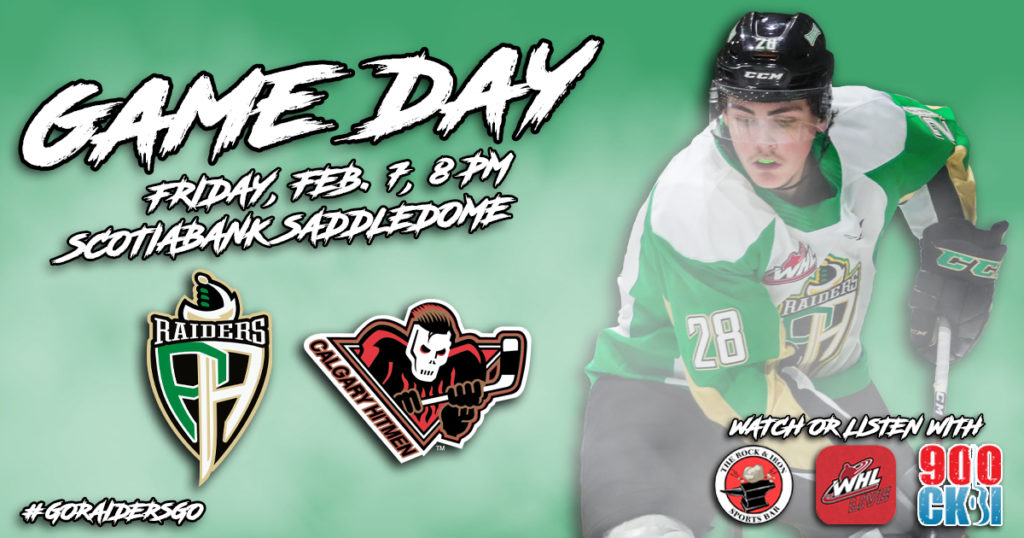 RAIDER REVIEW: The Raiders (28-14-5-4) continue their Alberta trip tonight against the Hitmen (27-16-4-1) in Calgary at the Scotiabank Saddledome. On Wednesday in Medicine Hat, the Raiders came from behind to beat the Tigers 4-3 in overtime. Aliaksei Protas had a pair of goals. Justin Nachbaur and Daniil Stepanov also scored. Max Paddock stopped 30 shots for the win.

MILESTONE MOMENTS: Two Raiders hit career milestones on Wednesday night against the Tigers. With his third-period goal, Aliaksei Protas recorded the 100th point of his WHL career. After scoring the overtime winner as well, the Washington Capitals prospect has 35 goals and 66 assists in his 106-game career. Max Paddock also picked up the 50th win of his career with a 30-save effort. In 122 appearances, the Brandon, MB product has a 50-49-5-7 record with a 0.903 save percentage.

STEPPING IN: Daniil Stepanov drew back into the lineup on Wednesday night and made it count. The import forward scored his first goal since Dec. 7 in Moose Jaw against the Warriors, a span of 14 games. Stepanov has five goals and three assists in 34 appearances with the Raiders after being acquired from Moose Jaw in October.

STREAKING: Captain Zack Hayes extended his point streak to four games with an assist on Wednesday night. Over that stretch, the overage blueliner has two goals and three assists. It matches the Calgary product’s longest point streak set last season from Nov. 17 to 24, in which he recorded four assists.

HELPING HAND: Brayden Watts set a new career high for assists in a season with 27 after a pair of helpers on Wednesday. His previous high was 26, set last year in Vancouver. Watts is two points from reaching 50 in a season for the first time.

NEXT UP: The Raiders wrap up their Alberta trip tomorrow night in Lethbridge against the Hurricanes at the ENMAX Centre. Game time is 8 p.m. The next Raiders’ home game is on Friday, Feb. 14 against the Swift Current Broncos. Puck drop is 7 p.m. Tickets are available at the Raiders Office and online here.