Protas Scores Twice in 15 Seconds As Raiders Down Tigers 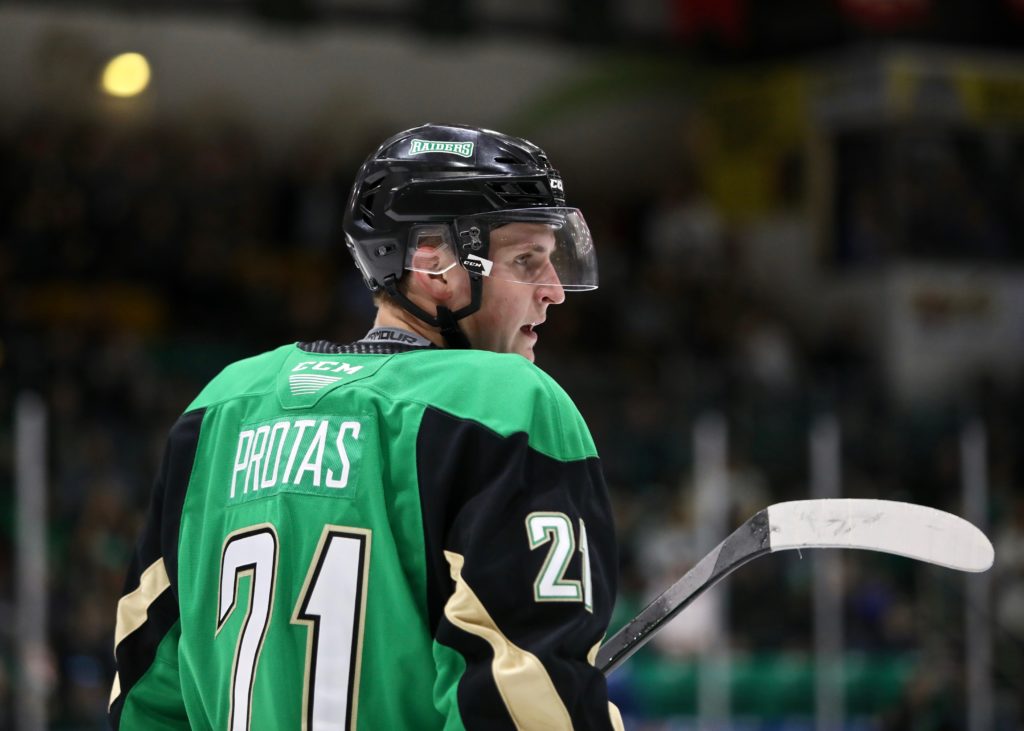 Medicine Hat, AB – Aliaksei Protas tied the game with seven seconds left in regulation then won the game in the extra frame as the Prince Albert Raiders (28-14-5-4) took down the Medicine Hat Tigers (32-15-2-1) 4-3 in overtime on Wednesday night at the Canalta Centre.

Protas’ two goals on the night gave him his 100th and 101st career point in the WHL. Brayden Watts picked up an assist on each of Protas’ goals. Justin Nachbaur and Daniil Stepanov also scored for the Raiders.

With his goal, Aliaksei Protas (@protas_21) has recorded his 100th career WHL point!

With the win, the Raiders extended their winning streak to four games and have recorded at least a point in 12 consecutive contests.

The Tigers opened the scoring with a strange goal at the 5:00 mark of the first. Baxter Anderson dumped the puck into the Raiders’ end. The puck took an awkward bounce over Max Paddock and into the top corner to make it a 1-0 game.

Just a 1:20 later, the Raiders levelled the score as Stepanov made an impact in his return to the lineup. The Belarusian forward carried the puck around the back of the goal and attempted a wraparound. Garin Bjorklund stopped it, but Stepanov kept at it and jammed the rebound over the goal line for his fifth goal of the season to tie it up at 1-1.

Early in the second, the Tiger took the lead again. Nick McCarry worked a give-and-go play with Parker Gavlas. On the return feed, McCarry redirected the puck through Paddock to put the Tigers up 2-1 at the 2:04 mark.

Nachbaur tied the game with a great individual effort at the 6:09 mark of the middle frame. The Cross Lake, MB product lifted the stick of a Tiger trying to take the puck out of his own end. Nachbaur put a quick shot on goal that got through Bjorklund and trickled over the goal line for his seventh of the season, making it 2-2.

SCORES! @Jnacks55 gets a shot through Bjorklund to tie it up!

The Tigers were able to up the pressure through the second period with a pair of power-play opportunities. However, Paddock was up to the task and kept Medicine Hat at bay.

Late in the second, the Raiders got their first attempt with the man advantage. Nachbaur, Zack Hayes, and Reece Vitelli were able to generate quality chances, but weren’t able to get another past Bjorklund before the end of the period.

The Tigers broke the deadlock late in the third period when McCarry tallied his second of the night. Medicine Hat worked a tic-tac-toe passing play that had Cole Clayton set up a cutting McCarry and the Tigers forward shoveled it past Paddock to give his team the 3-2 lead.

With seconds to go in regulation, Protas tied the game. After James Hamblin was unable to find the empty net, the Raiders carried the puck the other way. Spencer Moe hit Watts with a cross-ice pass, but Bjorklund stopped the one-timer. The rebound sat at the top of the crease and Protas potted his 23rd of the season to make it a 3-3 game with seven seconds left.

SCORES! The Viper from Vitebsk strikes with seven seconds left! @protas_21 bangs in the rebound!

Protas made short work of overtime for the Raiders. After Medicine Hat won the faceoff, one of the Tigers fell at the blueline. Protas got the puck and sent a pass over to Watts, who returned it quickly. The Washington Capitals prospect wired a shot past Bjorklund to end the game with his 24th goal of the campaign eight seconds into the extra frame.

Paddock finished the game with 30 saves in the win for the Raiders, which was the 50th victory of the goaltender from Brandon, MB’s career. Bjorklund stopped 18 shots in the loss for the Tigers.

Congratulations to Max Paddock (@paddockmax31) on recording the 50th win of his WHL career with a 30-save effort!#GoRaidersGo pic.twitter.com/IULvVm6CXD

The Raiders continue their Alberta trip on Friday night in Calgary against the Hitmen (27-16-4-1) at the Scotiabank Saddledome. Puck drop is 8 p.m. Listen to the game on 900 CKBI with Trevor Redden, or head to The Rock And Iron Sports Bar to watch.

The next Raiders’ home game is on Friday, February 14 when the Swift Current Broncos make their final trip of the season to the Art Hauser Centre. Puck drop is 7 p.m. Tickets are available at the Raiders Office and online here.