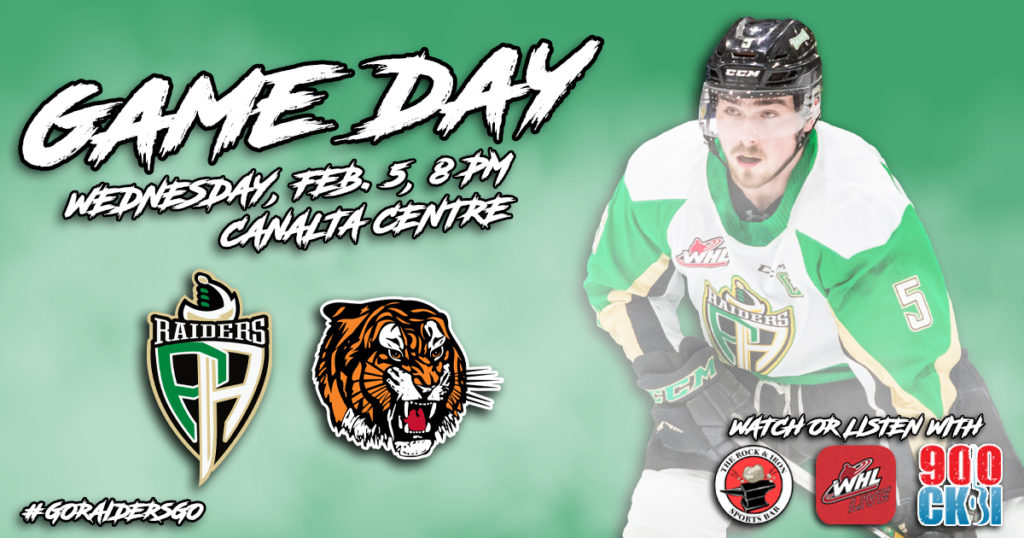 RAIDER REVIEW: The Raiders (27-14-5-4) head to Medicine Hat tonight to take on the Tigers (32-15-1-1) at the Canalta Centre. On Saturday, the Raiders knocked off the Broncos 4-1 in Swift Current. Zack Hayes had a goal and an assist in the win, while Kaiden Guhle had another two assist night. Evan Herman and Jeremy Masella also scored. Carter Serhyenko stopped 23 shots for his sixth win of the year.

WEEKLY AWARD: Max Paddock was the recipient of this week’s WHL Eli Wilson Goaltending Goaltender of the Week award. The Brandon, MB product picked up both wins, including one shootout, in his award-winning week. Since joining the Raiders at the WHL Trade Deadline, Paddock has sported a 1.34 goals-against average and a 0.946 save percentage while playing in seven games.

BACK TO BACK: For the second time in his WHL career, Zack Hayes has scored in consecutive games. He previously accomplished this last season on Oct. 16 and Oct. 20 against the Calgary Hitmen and Spokane Chiefs, respectively. With his two-point night on Saturday, Hayes has five goals and 13 assists in 46 games this season.

250 TIMES: Saturday night was Spencer Moe’s 250th career game in the WHL. The Calgary, AB product was a second-round pick of the Raiders in the 2014 WHL Bantam Draft. Moe is enjoying his best offensive season with 16 goals and 24 assists in 50 games this year. He has amassed 40 goals and 69 assists during his career.

STILL STREAKING: Kaiden Guhle extended his team-leading active point streak to five games with two assists on Saturday night in Swift Current. Over the five-game stretch, the 2020 NHL Draft prospect has two goals and six assists. Guhle is tied for 12th in league scoring among defenceman with nine goals and 25 assists in 50 games this season.

NEXT UP: The Raiders head to Calgary on Friday night to take on the Hitmen. Game time is 8 p.m. The next Raiders’ home game is on Friday, February 14 against the Broncos in the final game of the season series. Puck drop is 7 p.m. Tickets are available at the Raiders Office and online here.