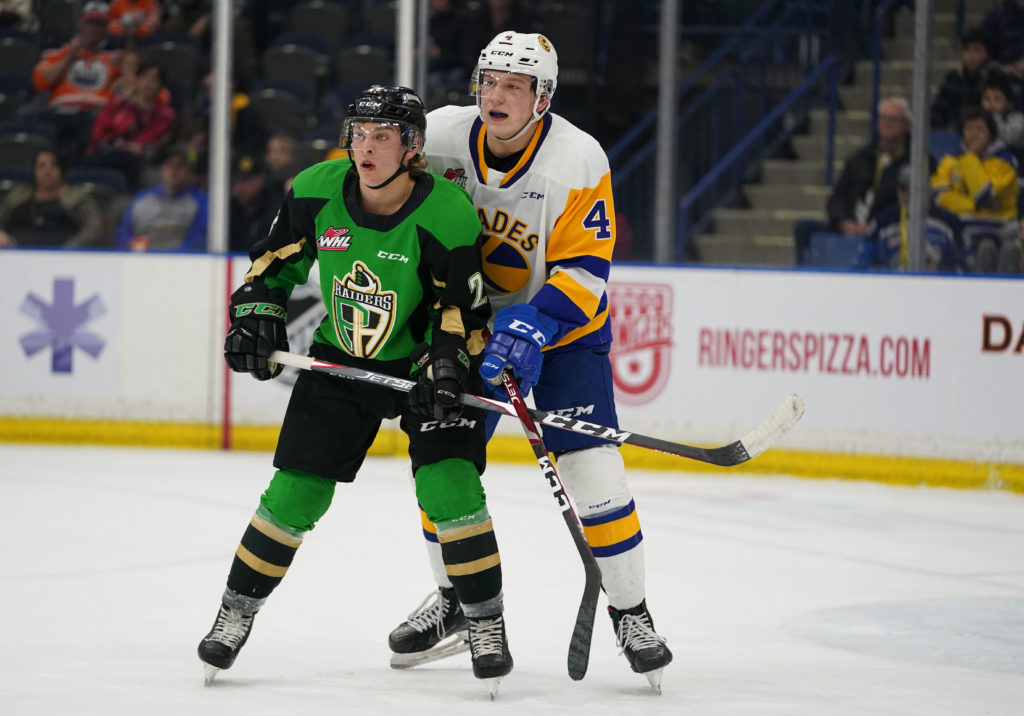 Saskatoon, SK  – The Prince Albert Raiders (32-17-5-4) had their four-game winning streak snapped by the Saskatoon Blades (31-22-2-3) at SaskTel Centre on Friday night, falling 4-2 to their East Division rivals.

Nolan Allan and Ozzy Wiesblatt were the goal scorers for the Raiders. Wiesblatt’s goal extended his goal-scoring streak to three games and point streak to six.

Saskatoon opened the scoring on the power play. The Raiders had a shorthanded rush that led to a scoring chance by Aliaksei Protas that was stopped by Nolan Maier. The Blades came the other way. Kyle Crnkovic had the puck and found a trailing Zach Huber coming off the bench. Huber had space and snapped a shot past Max Paddock to make it a 1-0 game with 7:54 to go in the first.

The Raiders got the goal back early in the second period. Justin Nachbaur sparked a rush by finding Ilya Usau with a stretch pass on the right wing. Usau found a cutting Ozzy Wiesblatt, who was able to take the pass of his skate and get his stick on it to tip it past Maier for his 23rd of the year, levelling the score at 1-1.

SCORES! Ilya Usau sets up @ozzywiesblatt who tips it past Maier!

Wiesblatt nearly struck again shortly after. Usau hit the Calgary, AB product with a backdoor pass from the left corner. Wiesblatt took a second to collect and tried to lift a shot over Maier, but the Blades netminder caught the attempt.

Early in the third, Paddock made his best save of the contest. Tristan Robins found Riley McKay at the side of the goal. McKay shovelled the one-timer on goal, but Paddock stuck out his pad to deny the overage forward.

The Blades regained the lead with 7:18 remaining in the third period. Tristen Robins kept the puck on a two-on-one rush into the Raiders’ end and snapped a shot through Paddock to give his side the 2-1 advantage.

Three minutes later, Saskatoon doubled its lead with a power-play marker. Scott Walford set up Robins with a one-timer at the point and Robins’ shot got past Paddock to put the Blades up 3-1 with 4:17 to play.

Crnkovic added an empty netter for the Blades with 1:17 remaining after getting around the outstretched stick of a diving Raiders’ defender.

With just four seconds to play, Allan tallied his second goal of the season. He got a pass near the point as was able to skate into a shot that beat Maier to make it a 4-2 game.

Nolan Allan nets his second goal of the season in the waning seconds of the third.

Paddock finished the game with 23 saves in the loss, just his third regulation loss since joining the Raiders. Maier stopped 24 shots for the Blades.

The two teams clash again at the Art Hauser Centre on Saturday night to close out the home-and-home series. Puck drop is 7 p.m.

That weekend ends on Sunday with an evening game against the Moose Jaw Warriors. The game begins at 6 p.m. Tickets are available at the Raiders’ Box Office beginning at 10 a.m. on Saturday morning and online here.